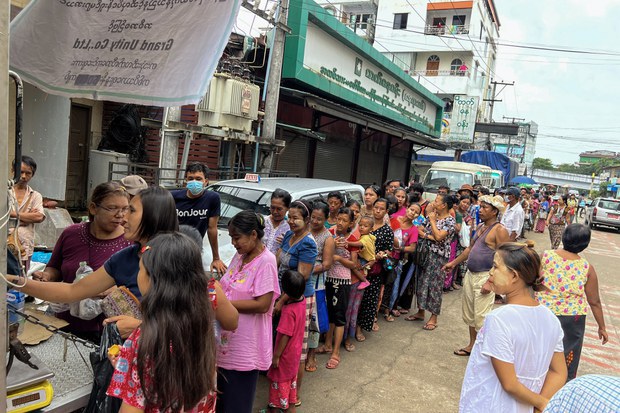 At least six people have died and 2,457 have been infected in Myanmar since the start of the month amid an outbreak of a new omicron variant of COVID-19, the junta’s Ministry of Health announced Thursday.

The ministry announced the numbers for the two weeks ending Sept. 14, noting that 384 infections and one death had been recorded on Wednesday alone.

Charity groups told RFA Burmese that the ministry’s announcement was based only on the number of patients who were treated at junta-run hospitals, suggesting that the actual number of infections is much higher.

A doctor who runs a private clinic in Myanmar’s commercial capital Yangon said that most patients who come seeking treatment exhibit signs of COVID-19, even if they aren’t being included in the junta’s official count of infections.

“There are fewer people wearing masks these days. Many shops have reopened and more people are going to bars and cafes,” he said, speaking on condition of anonymity.

“Additionally, many people who need cooking oil stand in long lines at charity centers without any regard to rules of social distancing, so COVID is making a comeback.”

The doctor told RFA that because the genetics of the disease have changed with the new variant, symptoms such as loss of smell and low oxygen levels have become less obvious.

“But the rate of infection is increasing,” he said. “When we perform tests on patients, we find it in nearly all of them.”

He predicted that the number of infections will only increase in the country unless measures are put into place to prevent transmission.

A resident of Yangon, who also declined to be named, said that the junta’s mismanagement of the economy has left people more concerned with ensuring that they have enough food to eat than the risks associated with the disease.

“People are not very careful about COVID at present. They are working hard to obtain their daily sustenance, so COVID is enjoying a resurgence,” he said.

“Most people don’t even know they have the virus. They only find out they have it after getting tested. Low income laborers couldn’t care less about COVID, as their priority is finding enough food to eat.”

The Yangon resident called the situation “critical” and suggested that, with the rising cost of medicine due to inflation, the outbreak’s toll is only likely to get worse.

Myanmar was hit with a third wave of the coronavirus shortly after the military seized power in a February coup last year prompting the country’s workers – including its health professionals – to strike as part of a nationwide Civil Disobedience Movement. The shortage of doctors and nurses, as well as a dearth of medicine and equipment, allowed the disease to spread largely unchecked.

This time around, said Khin Maung Tint, the chairman of a Mandalay-based social assistance association, organizations such as his were prepared, having stockpiled medicine and equipment in case of a new outbreak.

“Our main challenge is the rise in petrol prices,” he said. “People are also enduring financial difficulties and so we are currently providing care for free in most cases.”

However, he warned that without help from authorities to curb the outbreak, “we could run out of supplies, and that would be difficult for us.”

On Thursday, the junta’s Information Ministry announced to the media that mass infections had been recorded in several schools and workplaces. It said authorities are “working with relevant departments to enforce COVID prevention.”

Some 80% of infections since the start of the year occurred in patients who had not received vaccinations, the ministry said.

Attempts by RFA to contact junta Ministry of Health spokesperson Than Naing Soe for details on efforts to control the spread of the disease went unanswered Thursday.

A CDM doctor, who asked to be identified by the name Olivia, urged the public to follow simple practices such as wearing masks, washing hands and adhering to social distancing guidelines, which she said would go a long way in helping to combat the outbreak in Myanmar.

“Prices are rising fast — from basic foods to essential medicines,” she said.

“If your health is affected, medical expenses will add a huge burden on your shoulders. So take care now more than ever — even twice as much as the last outbreak.”

To date, 617,739 people have been infected with COVID-19 and 19,444 have died since the pandemic first spread throughout Myanmar in 2020, according to the Ministry of Health. More than 36 million of the country’s 54.4 million people have been vaccinated against the disease.