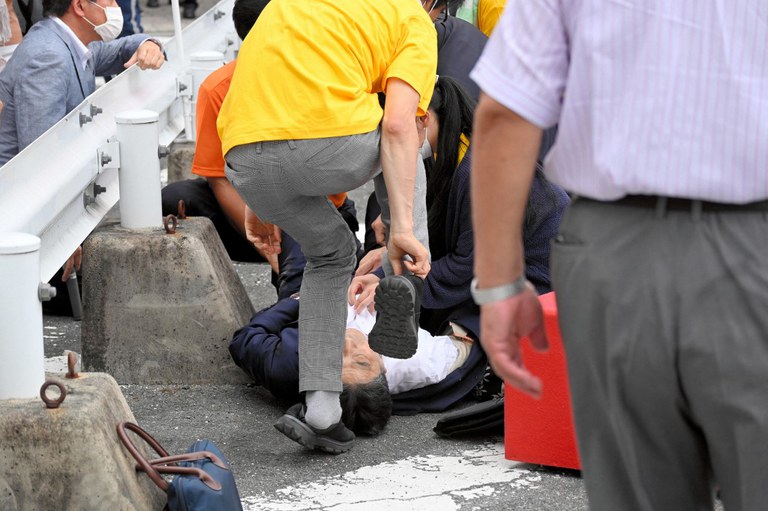 The news of Abe’s death following a shooting by a gunman in Nara during an election campaign made it to the front page of the CCP’s official People’s Daily newspaper online edition, but as a fairly small headline below a plethora of stories about CCP leader Xi Jinping.

The paper carried a factual news report from state news agency Xinhua in full, with a statement from the foreign ministry wishing Abe recovery as emergency medics tried to save him.

“After Japan’s announcement of Abe’s death, Chinese Embassy in Japan also mourned Abe’s passing and extended condolences to his family,” the paper said.

It quoted “analysts” as saying that “Japanese right-wing forces may use this incident to push forward the trend of conservative transformation in Japanese politics … bringing more security risks to the geopolitics of Northeast Asia.”

It quoted Da Zhigang, director of the Institute of Northeast Asian Studies at Heilongjiang Provincial Academy of Social Sciences, as saying that Abe’s death could boost nationalistic sentiment in Japan.

“Japanese nationalism is also likely to be further strengthened by the incident,” Da said. “People may have concerns about whether the volume of calls in Japan to return to the path of war will increase further.”

Some online comments reacting to Abe’s death on Chinese social media platforms were nakedly hateful, according to The Great Translation Project Twitter account, which translates and curates social media commentary in China.

“The people of Shaanxi extend our warm congratulations to this,” the account translated one comment as saying. Several other comments followed with the exact same wording, but referring to different parts of China.

Meanwhile a hashtag #kexibushini, which translates as “a pity it wasn’t you,” but could also be read as hinting at the wording “but Xi it wasn’t you” in a possible reference to CCP leader Xi Jinping, was blocked on social media platforms.

One comment read: “These censors seem to know [what we mean] better than we do!” while another replied: “It’s so funny. Everyone knows.”

“Someone is likely getting scared in Zhongnanhai,” another comment read, referring to the headquarters of the CCP leadership in Beijing.

Abe, 67, was shot from behind minutes after he started his speech in Nara, the Associated Press reported.

Police arrested the suspected gunman at the scene of the attack, while prime minister Fumio Kishida and his cabinet ministers rushed back to Tokyo to respond to what Kishida called a “dastardly and barbaric” attack.

Sunday’s parliamentary elections will go ahead as planned, he said.

China and Japan have been at loggerheads over a disputed island chain, visits by Japanese politicians to the Yasukuni shrine, where some Japanese war criminals are interred, and an ongoing war of words over Tokyo’s recognition of past military aggression and human rights abuses in East Asia.

In 2012, a tense diplomatic standoff with Japan sparked nationwide protests and anti-Japanese riots over the Senkaku, or Diaoyu, Islands, while China held war drills in waters near Japan after then opposition leader Shinzo Abe visited the controversial Yasukuni shrine in Tokyo which honors Japan’s war dead, including Class A war criminals.

The CCP later launched a crackdown on “irrational” forms of nationalism at home, after thousands of people took to the streets in a wave of mass protests in Chinese cities that lasted for several weeks.

On the democratic island of Taiwan, where former president Lee Teng-hui was known to have a close relationship with Abe, President Tsai Ing-wen severely condemned the violence of the attack.

“Japan … is an important democratic partner of Taiwan … and former prime minister Abe was committed over the long term to deepening friendly ties between Taiwan and Japan,” Tsai said.

A similar statement was issued by the office of former president Ma Ying-jeou.

“I am deeply saddened to hear that my friend, Mr. Abe Shinzo has passed away following a gunshot attack this morning,” the Tibetan exiled spiritual leader wrote. “I pray for him and offer my condolences to you and members of your family.”

“As you know, your late husband was a steadfast friend of the Tibetan people. I very much appreciated his friendship and support of our efforts to preserve our rich Buddhist cultural heritage and identity,” the letter said.

Cambodian Prime Minister Hun Sen expressed grief for Abe, who he called a “”a long-time good friend of mine and Cambodia.”

“I was extremely shocked and deeply saddened to learn about the passing of His Excellency Abe Shinzo, resulting from the daylight assassination.”

Abe, he said, “was an outstanding Japanese statesman who had been widely acknowledged and praised for his able leadership to move Japan forward and for his active contribution to peace, stability and prosperity in the region and beyond.”

State media in Vietnam carried Abe’s killing as top news, publishing photos of Hanoi’s top leaders meeting Abe, who had stepped up Japanese dipplomacy in Southast Asia and cultivated ties with Vietnam as a counter to China.

The Vietnamese government and ruling Communist Party had yet to make any official announcement or reaction on Abe’s death as of Friday night.

In Laos, state media also reported Abe’s death, while the government had yet to release any reaction on Friday.