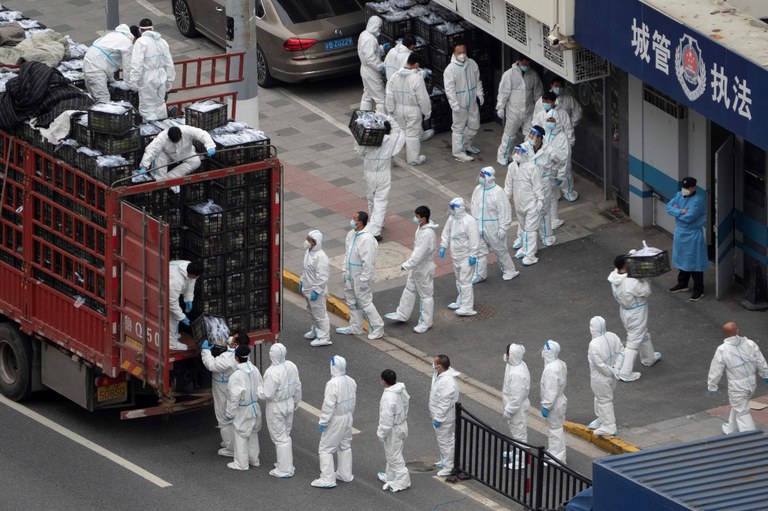 Authorities in Shanghai on Friday warned the city’s 26 million residents not to post ‘rumors’ online amid growing public anger over food shortages amid a citywide COVID-19 lockdown.

“The Cyberspace Administration of the municipal [ruling Chinese Communist] Party Committee reminds social media group chat members and moderators that … it is especially necessary in the current situation to prevent the spread of all kinds of rumors, false information or fear-mongering,” the municipal government said in a post to its official Weibo account.

“[Social media users] must not make up rumors to cause trouble or for the purposes of grandstanding,” it said.

“We will continue to work with police and other departments to track down rumor-makers and those who deliberately spread rumors, working from public tip-offs and online investigations, and punish them according to law,” the message said.

The warning came after Shanghai police denied an online report that the authorities had banned group-buying practices among locked-down residents, who have been complaining of food shortages due to a lack of takeout services and inadequate fresh supplies from the government.

The Shanghai government said its consumer protection committee had on Thursday updated a list of sites offering group-buying opportunities for fresh fruit and vegetables, sanitary towels and diapers, as well as baby formula and other dairy products.

“Some group buying groups may be full,” the notice warned. “The municipal consumer protection committee [will] strive to meet the needs of the public.”

“We will continue to urge enterprises and sellers on the list to make every effort to ensure supplies,” it said.

It said officials would contact sellers and consumers “to properly resolve … problems with shopping as shown in online posts from users.”

The government also denied a report that the authorities were planning to send in armed police to take over the running of residential communities from neighborhood committees, many of whom have been superseded by self-organizing mutual help groups.

“On April 7, a rumor that the armed police will take over Shanghai communities” went viral on social media and online platforms,” the government said, adding that police had detained a 35-year-old man surnamed Zhou on suspicion of “disrupting public order through fake news.”

Residents across the city, including Pudong New District, Leyuan Road, Jinqiao township, Songnan No. 1 Village and Baoshan district, have posted in recent days to Weibo, appealing for help sourcing food, saying that promised supplies had failed to arrive, or were simply not enough.

“We try and call the leaders every day, because nobody has food, because we’ve been locked down for many days now,” a resident of Jiading district told RFA on Friday.

A Shanghai resident surnamed Xia said: “The government did distribute a batch of supplies, but even if it distributes that amount to more communities, it’s far from enough to last the whole length of this lockdown.”

She said auction site Taobao has halted deliveries, and buying groups are hard to find and get into.

“Some babies have split diapers, some people’s wifi is down, and nobody has come to repair it, and some people need teeth filled that have exposed nerves, but they can’t go out,” Xia said.

She said some online stores had produce available, but it sold out very fast online first thing in the morning.

“Fruit, coffee and snacks are already luxuries, and some people have no salt left. Things are very bad,” she said.

A resident surnamed Gu said he had received just two deliveries of groceries in 28 days of lockdown, that were enough to last his household 10 days.

The lockdowns were announced too suddenly for most people to lay in sufficient stores of food, he said.

“We are locked into our residential community and can’t go out to buy stuff,” Gu said. “There is basically no supply chain left, and online deliveries have been disrupted or stopped altogether.”

“There isn’t anything available to buy online, nor enough people to deliver it,” he said. “There’s a problem with the food supply chain.”

A video clip taken in Shanghai’s Putuo district and seen by RFA showed one man on the phone with police, yelling that there was nobody to take care of his elderly grandmother in or his parents in Xuhui district.

“Is the government of Shanghai even human?” the man yells in the clip.

Another video circulated of shots of people falling from a number of different tall buildings. RFA was unable to verify the content of the video independently, but its reporters have received reports of suicides, sometimes by people unable to access life-saving medical treatment due to the lockdown and the closure of a number of medical facilities to new patients.

The Shanghai government released a list of closed medical facilities on its Weibo account on Friday, showing a total of 26 hospitals and clinics in Xuhui, Baoding, Pudong, Changning and other districts were closed.

“Some medical institutions in this city have suspended some medical services due to their cooperation with pandemic investigations,” it said.

“Citizens are reminded to pay attention to the information released by official websites and social media accounts of various medical institutions in a timely manner before seeing a doctor,” it said, but offered no emergency number or other avenue to seek assistance.

A man in Kailu No. 5 Village called the emergency services to tell them he hadn’t eaten in four days, according to a recording posted online.

“Hello, is that the … police station? I’m not trying to cause trouble, but if I charge past the community cordon and you arrest me, will I get something to eat?” the man says.

“You can’t rush out of the residential community,” the officer replies, to which the man says: “Then you’d better come and pick up the body.”

The man said he had registered for a food parcel on April 1, but has yet to receive anything. He said his local neighborhood committee had failed to help, saying only that they had no food, and that they would call him back.

The man said he understood why the revolts of ancient history had taken place.

Many residents have turned to community group-buying to order groceries or meals in bulk from local suppliers or restaurants, with some even organizing their own deliveries, sometimes days after the order is placed.

Shanghai on Friday announced a record 21,000 new cases of the highly-transmissible omicron variant of COVID-19, as the city entered a third consecutive day of COVID testing.

Some Shanghai residents complained that their neighborhood committees had sent out messages saying they were no longer allowed to do group buying, citing contagion risks and manpower issues, Reuters reported.

At one housing compound, some residents turned away a truck full of orders made by their neighbors, citing virus risk, it said.

Caixin media reported on April 7 that the head of a software company in Shanghai had posted on WeChat Moments that at least 10 percent of the company’s dozens of employees in Shanghai are now subsisting on instant noodles, biscuits and frozen food.

He said some younger people who haven’t joined a buying group are in danger of running out entirely.

“Buying food to eat is the thing people are most concerned about,” the Caixin article said.

It quoted municipal commerce official Liu Min as saying that “there have indeed been some difficulties in ensuring supplies of basic supplies,” citing problems with deliveries coming into the city from outside.

According to social media posts, some residents of a housing compound in Putuo district staged a “coup,” deposing the neighborhood committee and taking over the distribution of supplies, organizing mass PCR testing and setting up a social media account to communicate with residents. k

Shared under the hashtag #LongLiveThePeople, the post claims that the “uprising” took place in Anju Chaoyang Garden, after residents found the neighborhood committee had been hoarding supplies.