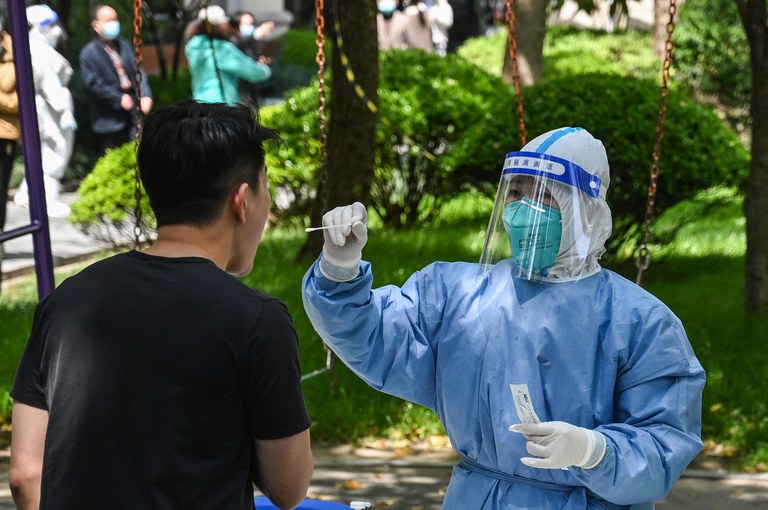 The mass, out-of-town relocation of thousands of people from Shanghai who have tested positive for COVID-19 is sparking a social media backlash from neighboring regions in China, according to local residents and social media posts.

With more than 10,000 people testing positive for the virus in the city so far, and isolation and quarantine facilities in the city overflowing, the authorities have started packing thousands of local people onto mass transportation and sending them to isolation camps in neighboring provinces and cities.

Social media user @DeliciousFishSkinCrispy called the policy “shameless,” saying that some 30,000 Shanghai residents are being sent to the eastern province of Zhejiang alone.

Others complained of a lack of containment measures during the trip to the isolation facility, saying the lax restrictions on those known to have been exposed to the virus would likely spread it to the surrounding areas.

“The neighborhood committee told us they wouldn’t be providing any protective clothing, and that large numbers of close contacts were being sent to Hangzhou,” the user commented, adding that he was worried about testing positive after being put on a bus with a group of potentially infected people despite quarantining at home for four days.

He called on the government to issue personal protective equipment (PPE) to people ordered to leave town for isolation facilities.

Shanghai reported a cumulative total of 13,354 confirmed cases of COVID-19 on Tuesday, but officials vowed to stick to the ruling Chinese Communist Party (CCP)’s zero-COVID policy, despite skyrocketing numbers.

“We will stick unswervingly to the overall dynamic zero-COVID policy without hesitation, step up mass testing, quarantine and treatment, and realize the goal of zero-COVID in the shortest possible timeframe,” a health official told a news conference.

Local media reported that around 10,000 people have been sent to Hangzhou, the same number to Ningbo, 6,000 sent in total to Shaoxing and Jinhua, and 4,000 in total to Huzhou and Taizhou.

But local residents also reported a huge divide between the treatment meted out to the poorest and most vulnerable people during the current outbreak, and those living in affluent neighborhoods.

A resident of Hongqiao Emgrand Garden in Shanghai’s Changning district who gave only the surname Jiang said her residential community was well-supplied, despite reports of food shortages in other parts of the city.

“The volunteers were delivering rapid antigen test kits door to door yesterday,” Jiang said. “Nobody in the community is allowed out, not to walk the dog, not to hang out down in the courtyard; we all have to stay home.”

“[However], it is being managed very well, and everyone is behaving very responsibly,” she said. “They even called us to say that proper fresh vegetables were being delivered, as well as steak and shrimp balls to every household yesterday evening.”

Yet residents of the less affluent districts of Juquan, Xinyuan, Gucun township and Baoshan faced food shortages during their lockdown, while those in isolation facilities hadn’t received any government food supplies for nearly two weeks, according to social media reports.

Instead, food supplies are dumped outside in the courtyard to leave people to fight for food in chaotic scenes that some people likened to the Hunger Games.

In New York, Chinese dissidents who formed the Shanghai National Party in exile staged a three-day hunger strike outside the Chinese consulate from April 4.

Dissident He Anquan told reporters from a tent across the street from the consulate on Tuesday that he hadn’t eaten for 24 hours, and was struggling to keep warm with the temperature at a chilly nine degrees Celsius.

“Of course it’s cold, but it’s still above freezing point,” He, who is refusing food but taking water, told RFA.

“As a Shanghainese, this is all I can do to express my feelings of solidarity and concern to the 25 million Shanghai residents who live, work and were born in Shanghai,” he said.

Since the citywide lockdown began, patients have died due to lack of timely medical treatment and children have been sent to separate isolation facilities from their parents, while food prices have skyrocketed.

Some residents have committed suicide by jumping off their buildings, He told RFA.

“The Chinese government’s lockdown policy in Shanghai amounts to a massacre, because it has resulted in the death of Shanghai citizens without medical treatment, or suicide due to emotional breakdown, all kinds of tragedies,” he said. “These things are already happening.”

“[CCP leader] Xi Jinping wants to achieve national unity during these citywide lockdowns,” Wang said. “We are very opposed to his cruelty to the people of Shanghai.”

“We came to oppose Xi Jinping’s shutdown of the city.”

There are signs of growing dissent over Xi’s preference for a zero-COVID policy within China, however.

A recent analysis that appeared on the encyclopedia site Zhihu argued that only the strictest lockdowns were of any use whatsoever in curbing the spread of the highly transmissible omicron variant of COVID-19.

“The omicron variant spreads 5.82 times faster than the previous variants,” the article said.

““The likelihood of bringing it under control is only around 51 percent, unless the strictest possible containment and control measures are applied immediately, as soon as the first case appears [in a city].”