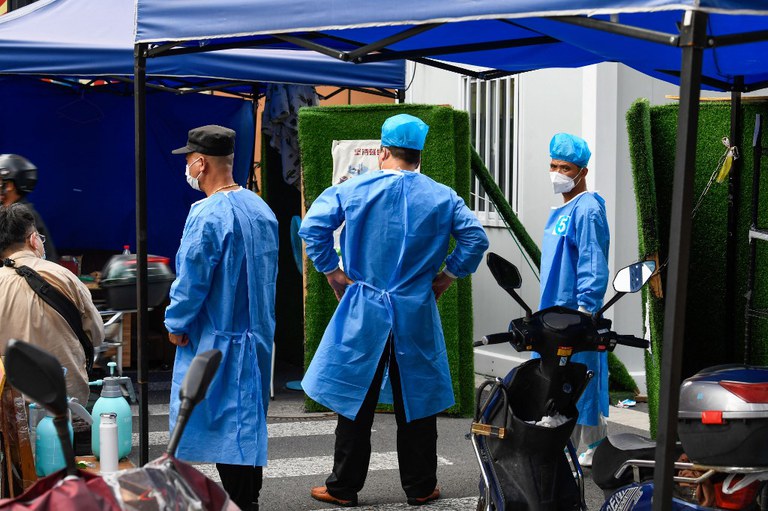 Restaurants in Shanghai are offering secret lights-out dining and fake recruitment drives in a bid to get around the city’s stringent COVID-19 restrictions, RFA has learned.

Residents of the city told RFA that despite the official lifting of a citywide lockdown on June 1, the municipal authorities have yet to lift a ban on in-house dining.

“They’re still not allowing people to eat in,” a Huangpu district resident surnamed Yang said. “I can only eat secretly in the upstairs area, as dining in isn’t generally allowed, only takeout.”

“My brother did the same — a friend invited him out to eat, and they went upstairs to an area of the restaurant you couldn’t see,” he said.

Photos and video uploaded to social media showed people sitting at restaurant tables filled with food, but eating the light of their mobile phones, to avoid alerting any enforcement personnel to their presence.

Other posts said some restaurants had made diners fill out application forms to work there, claiming them as employees, who are allowed to eat together in restaurants.

When their meal was over, the diners resigned from the payroll, the reports said, likening the process to an underground party.

Shanghai’s 26 million people are still being required to take a COVID-19 test several times a week, to be allowed to move around in public, residents said.

“If you need to go out, to leave your residential compound to see the doctor, go to the supermarket, take the bus, etc., you need a negative PCR test result from the last 48 hours,” a Jing’an district resident surnamed Dai told RFA.

Authorities in the southern city of Shenzhen announced similar requirements for anyone using public transportation in the city, including taxi or ride-sharing hires.

“Beijing is carrying out mass PCR testing for all employees, and there is a lot of money involved,” Hua said. “The Beijing municipal government is in a very strong financial position, and it has that money to spend.”

“But the situation is very different in other places,” he said. “Some local governments are very poor, and the people there are being forced to pay for the tests themselves.”

Hua said the policy is more about political performance and official rankings than public health.

“If officials fail to prevent or control COVID-19, they are severely punished, so party and government leaders are implementing these policies while trying to help out local governments and take on double the economic burden,” he said.

A resident of the central province of Hubei who gave only the surname Lu said PCR testing is still mandatory in the provincial capital, Wuhan.

“Things can’t go on like this … the economy is really bad and can’t take much more of this,” Lu told RFA. “Many companies, logistics and supply chains can’t carry on.”

“Such frequent PCR testing is totally ridiculous … it would be better not to have any testing at all,” he said.

Meanwhile, a resident of the central province of Henan said they are suing the government for using the “health code” COVID-19 app to restrict their movements during protests by depositors unable to withdraw their money from the Agricultural Bank.

Xie Yanling, a resident of Dingzhuang village in Henan’s provincial capital Zhengzhou, told Caixin.com that she is suing the authorities for allegedly turning her traffic-light style health code amber despite her having submitted a negative PCR test result, on the day she was due to attend a court hearing relating to the demolition of her home.

“It’s inexplicable,” a person familiar with the case told RFA. “The code had been green.”

“I wish they would carry out the relevant policies in a normal manner, legally, and in the plain light of day,” the person said.

Cai Fan, a retired associate professor of law at Wenzhou City University in Zhejiang, said health codes are being used for “stability maintenance” purposes in China.

“This forced demolition involves the vested interests of the village committee and local government,” Cai said. “If they turn your health code amber for the hearing, you won’t be able to get in.”

“Then, after a period of time, the government will level the land, put new buildings there, and you won’t be able to do anything about it,” Cai said. “It will be a fait accompli.”