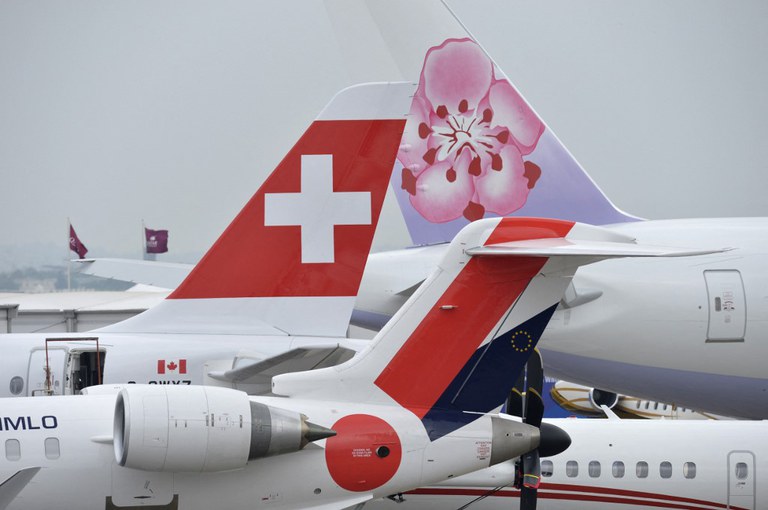 A Swissair flight from Zurich to Shanghai was canceled 20 minutes before departure on Tuesday, leaving more than 200 Chinese passengers stranded, as Shanghai’s COVID-19 lockdown begins to bite.

Swissair flight LX188 was due to take off for Shanghai’s Pudong International Airport at 7.10 p.m. local time on Monday evening, but was canceled as passengers were waiting to board the plane at the gate, despite all having provided negative COVID-19 tests at check-in, disgruntled passengers told RFA.

Some passengers shared photos of people holding up placards saying “I want to go home,” in the airport, demanding the authorities take measures to help them.

In one video clip uploaded to social media, the passengers stood in a row chanting “We’re going home! We’re going back to China!”

They included around 100 passengers who had transited through Zurich following a 10-hour flight from Brazil, as well as children, elderly and a pregnant woman, passengers told RFA.

Zhejiang-based scholar Cai Yong said the group appeared to be angry with Swissair for canceling the flight, although it was the authorities at Pudong who had revoked its landing permission.

“The stranded passengers have no problem with the Chinese government, just the airline,” Cai said. “They are addressing their demands to the wrong place.”

“It would make more sense for them to get in touch with their local Chinese consulate, and convey their demands to the Chinese government [that way],” he said.

Passengers posted to social media that some of their visas had expired, leaving them in Switzerland illegally. Most said they were forced to buy tickets on other flights at sky-high last-minute prices.

Calls to the Chinese consulate in Zurich resulted in a statement saying officials there respected “all Swiss decisions.”

Consulate trying to ‘pass the buck’

However, some help did arrive from the consulate on Tuesday morning, as consular officials delivered food, water and other necessities to Chinese nationals still stranded at the airport, and promised to negotiate with Swissair on their behalf.

“This flight cancellation wasn’t done by the airline, which was forced into that decision,” Cai said. “The consulate is also trying to pass the buck.”

“Don’t any of those people have critical thinking skills?” he said.

Germany’s Lufthansa was also forced on Tuesday to cancel a flight to Shanghai from Frankfurt, while Air China also canceled CA842 from Vienna to Beijing, leaving more than 100 Chinese nationals stranded in the Austrian capital.

Chinese scholar Wang Zheng said many people have taken by surprise at the strictness of Shanghai’s COVID-19 restrictions.

“Many people have expressed surprise and incomprehension faced with Shanghai’s COVID-19 measures,” Wang told RFA, adding that the lockdown is largely ideological, and in keeping with ruling Chinese Communist Party (CCP) leader Xi Jinping’s insistence on a zero-COVID policy.

“One size fits all lockdowns are the latest trend in the new era,” Wang said in a reference to Xi’s personal brand of political ideology, “socialism with Chinese characteristics in the new era.”

“Shanghai’s lockdown tells us that they are tightening restrictions to curb COVID-19, not loosening them,” he said.

Meanwhile, the current lockdown in the Pudong financial district and an imminent lockdown across the river in the downtown area of Puxi have been extended until April 5, local residents told RFA.

“The restrictions on the community have been extended now to April 5,” he said. Previously, the authorities said the lockdown would be lifted on April 1.

The news came as a study found that while China’s zero-COVID measures have been largely effective at curbing the spread of the virus, the country’s economy has paid a heavy price in the form of an estimated U.S.$46 billion in losses a month, just over three percent of GDP.

“The Shanghai lockdown has led to the disappearance of the entire electronic logistics industry,” Tsai told RFA. “The port is also directly affected, and it is impossible for goods to be shipped.”

“It’s also impossible for workers to commute to work normally. These are the points at which the economic impact is felt.”

“Once production is halted, they won’t be able to keep going because they will have operational difficulties caused by cash-flow problems, or even go bankrupt,” he said.

Current affairs commentator Si Ling said the lockdown in Shanghai casts doubt over whether the CCP under Xi is that committed to running a globalized economy that is connected to the rest of the world.

“It does make you wonder how determined China is to pursue economic reform and an open economy,” Si told RFA, in a reference to economic policies initiated by late supreme leader Deng Xiaoping in 1979. “Shanghai was once a window on the world for that policy.”

He said the status of Beijing, Shanghai, Guangzhou and Shenzhen as attractive entry points for foreign direct investment could now be in jeopardy.