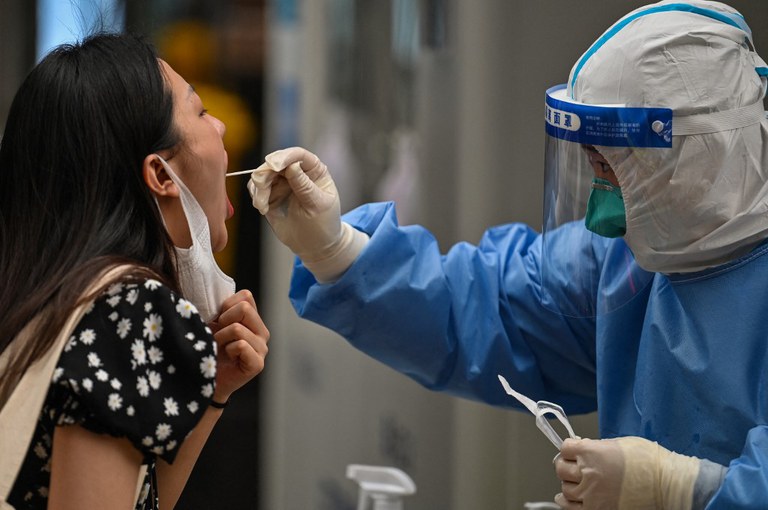 As Shanghai residents celebrated a partial end to a weeks-long, grueling city-wide lockdown, calls emerged on Wednesday for industrial action by businesses in the city to protest Chinese leader Xi Jinping’s zero-COVID policy.

As the Shanghai city government claimed the city’s lockdown had lifted despite multiple barriers to movement around the city, an open letter calling on workers and companies to “lie down on the job” and to go back to work, but not back to production began circulating online.

The May letter, penned by businesses rather than shop-floor workers, predicts mass capital flight and a widespread loss of public confidence in the ruling Chinese Communist Party (CCP) under Xi, and calls on the industrial sector not to act like “sheep fattened for slaughter.”

“It is a pity that some of us entrepreneurs and investors who are slightly successful, despite sitting on investments of hundreds of billions of yuan in Shanghai and across the whole country, and employing millions of employees, are still struggling,” the letter said.

“Repeatedly forced into isolation, door-to-door disinfecting and other threats at the hands of neighborhood committees, the police, and unidentified individuals, all that expensive real estate wasn’t enough to protect us or our families,” it said.

“Now we have woken up, we are no longer willing to wait like fat lambs for the slaughter,” it said. “In honor of the 20th CCP National Congress [later this year], we will be going back to work, but not back to production.”

Predicting mass capital flight a large-scale corporate bankruptcy, reorganization, and liquidation, the letter said the “rule of law” had been reduced to “rule by man”, while the economy had been hijacked by politics, leaving millions of COVID-19 “graduates” unemployed.

“Social unrest is inevitable,” it warned, adding that mass layoffs, salary cuts and streamlining would be necessary.

“We have a full sense of autonomy and aspire to fair competition,” the letter said. “We look forward to a civil society. The people should take back their civil rights and rebuild the country.”

It called on the government to overturn the guilty verdicts against entrepreneurs Ren Zhiqiang and Sun Dawu, as well as punishing officials responsible for “violating the law and disregarding public opinion” as part of the zero-COVID policy.

It called for the “release and rehabilitation” of political prisoners, calling them “national treasures, and the backbone of the nation.”

“Returning power to the people, rewriting the constitution, loosening the CCP’s control of the media, eliminating the privileged class, abolishing feudal systems like household registration and political review, and all other unreasonable systems that violate human morality and conscience,” the letter said.

“If the country does not reform, trust in the government cannot be rebuilt, and the free market cannot be hoped for, we will never have peace!” it said, calling for the protection of private property rights, especially freehold residential homes, the “last refuge of the family.”

RFA made contact with several of the people who authored the letter, via other contacts, and was able to verify its authenticity.

“I can guarantee that this is the true voice of some entrepreneurs in Shanghai,” Wang told RFA. “Instead of committing suicide like Nanjing entrepreneur Hou Guoxin, they fought back.”

“Even the strategy of resuming work without resuming production shows courage,” he said. “The open letter makes the crucial point that there can be no real economic vitality without political reform.”

France-based Wan Runnan, the dissident software engineer who founded Stone Emerging Industries Company in the 1980s, said Xi’s zero-COVID policy has led to the loss of China’s economic vitality, the loss of public support, and had likely also undermined the legitimacy of the CCP regime.

“Xi Jinping is so stupid and utterly barbaric,” Wan told RFA. “What is zero-COVID? … It has brought zero economic growth, and zero hearts and minds.”

“He has lost the support of the party, the people and the army,” he said. “Entrepreneurs are also a social force and a key component of public support.”

Bound to a sinking ship

Wan said China’s entrepreneurs know very well that if the 20th Party Congress does not initiate a process of political reform, they will eventually be bound to the sinking ship of the Chinese economy.

“Their plan is a very good one, which is to say that what happens to the economy depends on what happens at the 20th Party Congress,” he said. “If Xi doesn’t step down … then we are sorry but we won’t play ball.”

Residents of Shanghai celebrated on the streets after the lifting of lockdown at midnight on June 1, honking vehicle horns and cheering. Many of them have been trapped in their homes for more than two months.

Negative PCR tests continue to be required for entry and exiting residential estates and other public places, with hundreds of testing stations set up in the streets to facilitate compulsory mass testing.

A resident of Jing’an district surnamed He said she got up in the middle of the night to do her PCR test, to ensure the results were back by the time she needed to go grocery shopping.

“It takes between 48 hours and 72 hours to issue a PCR test certificate,” she said. “They ask to see these certificates if you go shopping at the supermarket.”

“It’s like the sword of Damocles hanging over your head; you need it to take the bus or get on the subway,” He said.

A Yangpu resident surnamed Chen said lockdown hadn’t even eased yet in her district.

“We’ve been issued with residents’ cards, which we will need to be allowed into the compound,” Chen told RFA. “Residents of Yangpu district haven’t been allowed to go out yet.”

“Trains also aren’t stopping at some stations, and the whole of Yangpu district is still under lockdown,” she said. “[They have divided up the city into] low, medium and high-risk areas.”