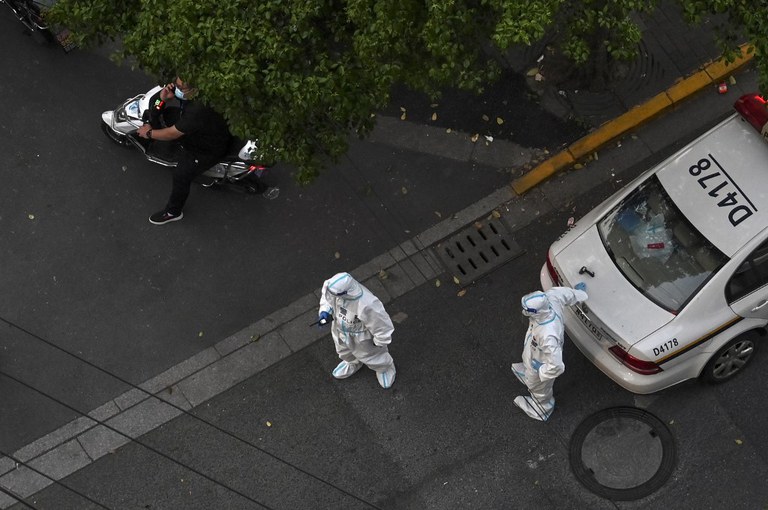 Shanghai-based rights activist Ji Xiaolong, who was recently released on bail by police, vowed on Tuesday to keep speaking out against rights abuses in the city, much of which remains under tight restrictions amid renewed rounds of mass testing.

Ji, who was incommunicado for two days after tweeting “The police are here looking for me” on Saturday. He told RFA late on Monday that he had been taken to the local police station for questioning.

Police clad in full PPE started knocking on the door of his apartment in Yanlord Riverside City, Pudong New District at 3.00 p.m. on April 30, before breaking down the door and grabbing him and his wife.

They gave no indication of their identity or purpose, but seized one of his laptops and two cell phones, as well as some letters he had exchanged with his wife in prison, Ji said.

They were “disinfected” and subjected to PCR tests before being taken to Meiyuan New Village police station and interrogated separately.

“I felt that something was up, because there were 10 of them this time, including two or three regular police officers from the local police station, some state security police from Pudong and also from the Shanghai municipal police department,” Ji said. “There were maybe four or five high-ranking officers.”

Ji, who has already served a three-and-a-half year jail term for writing political graffiti in a Shanghai public toilet, has been a vocal critic of the ruling Chinese Communist Party (CCP)’s zero-COVID policy of stringent lockdowns, mass isolation and quarantine facilities and wave upon wave of PCR testing that has sparked public anger over the “total chaos” of their implementation.

People in Shanghai have repeatedly complained of shortages of food and essential supplies and lack of access to life-saving medical treatment for those sick with something other than COVID-19, during the lockdown.

Ji was detained alongside his wife, who was released after a few hours, while he was released the following day on payment of a 1,000 yuan bond.

“They confiscated by ID card, my passport and my cell phone, which has my Alipay account,” Ji said. “I can’t get a new SIM card because they took my ID,” Ji said. “So now I can’t go anywhere because you have to scan the [COVID-19] health code app to go anywhere.”

His questioning came after he posted a petition to several social media platforms calling on the central government in Beijing and the municipal authorities in Shanghai to suspend the “zero-COVID” policy, and compensate Chinese citizens and businesses for the economic losses it incurred.

Ji had also posted a number of video clips and posts about Shanghai under lockdown.

During the interview, police confronted him with various comments he had made to overseas media organizations including RFA, the Epoch Times and New Tang Dynasty TV, as well as the petition he started, some video clips he reposted and some social media posts he made.

Ji said he had admitted to giving the interviews, and told them he had taken steps to verify the video clips before forwarding them.

His bail notice says he is currently under suspicion of “picking quarrels and stirring up trouble,” a charge frequently used to target peaceful critics of the government.

He said none of his interrogators had identified themselves to him, nor had they signed a transcript of the interview.

“I firmly believe that I am innocent,” Ji said. “I won’t sit idly by and watch the people of Shanghai suffer, and I will continue [to speak out].”

Ji isn’t the first to be targeted by the authorities anxious to prevent news from the front line of the zero-COVID policy reaching the internet.

Award-winning citizen journalist Zhang Zhan, whose family has said she is close to death in Shanghai Women’s Prison, was sentenced in December 2020 to four years’ imprisonment by the Shanghai Pudong New District People’s Court, which found her guilty of “picking quarrels and stirring up trouble,” after she reported from the front lines of the lockdown in Wuhan.

Meanwhile, private businessman Fang Bin has been incommunicado for more than two years after he reported as a citizen journalist from the early days of the pandemic in Wuhan.

He is believed to be in Wuhan’s Jiang’an Detention Center pending a trial at the Jiang’an District People’s Court, according to an unconfirmed account shared with RFA in recent months.

“The situation will get worse and worse, and more people will be arrested for different reasons … some for criticizing the government, or accused by the authorities of spreading rumors when they were just telling the truth,” Wang told RFA.

Six districts and five towns in Pudong were declared COVID-free by the Shanghai authorities on Sunday, but stringent lockdown conditions remain across nine other districts of the city.

Ji was initially jailed for scribbling “Down with the Communist Party!” in a Shanghai public toilet as well as some satirical graffiti taking aim at CCP leader Xi Jinping’s removal of the two-term limit for China’s highest-ranking leaders.

He was detained in July 2018 after calling on rights activists and democracy campaigners to respond to Xi’s call for a “toilet revolution” by penning political slogans on the walls of toilets in universities and hospitals that could be seen by thousands.

Ji was sentenced to three-and-a-half years’ imprisonment by the Shanghai’s Pudong District People’s Court in January 2019, after it found him guilty of “picking quarrels and stirring up trouble” on the same day.