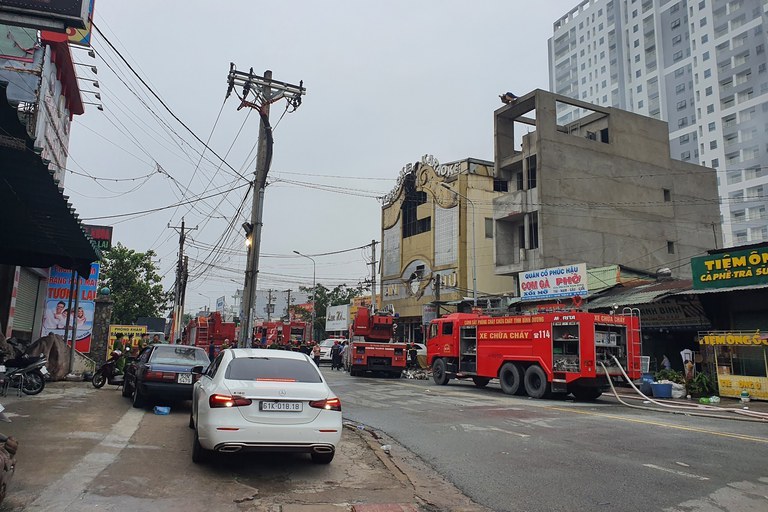 The death toll resulting from a fire at a karaoke parlor in southern Vietnam that claimed 33 lives earlier this week was likely made worse due to the owner’s disregard for safety standards and the failure of clientele to follow orders to flee the building, sources said Friday.

The blaze broke out on Tuesday evening at the An Phu karaoke parlor in Binh Duong province’s Thuan An city while as many as 70 people were inside the four-story building, according to state media reports, which said firefighters were able to bring the fire under control within an hour.

Several people jumped from the building to escape the flames, injuring themselves in the process, while others were able to descend rescue ladders, the reports said. Parts of the building collapsed during the fire, which killed 17 men, 15 women, and an unidentified person who sustained injuries during the incident and later died in the hospital, officials said at a news conference on Thursday.

VnExpress quoted Provincial Police Director Col. Trinh Ngoc Quyen as saying that customers had ignored employees who entered the rooms where they were singing and ordered them to flee. Most of the clientele had been drinking alcohol, he said, and most of the rooms were locked from the inside.

Officials said that the building had passed a safety inspection and that the cause of the fire had yet to be determined.

On Friday, a resident of the area told RFA Vietnamese that while intoxication likely contributed to the high number of deaths, the owners of karaoke parlors and other similar establishments often ignore safety codes.

“It’s frightening, everyone is scared of dying in case of a fire at the karaoke bars,” said the resident, who asked to be identified as “Mr. T.”

“All permits granted to the karaoke bars require that fire safety requirements be met. But in reality, the owners build as many rooms as they can in multi-storied buildings because space isn’t cheap in the city. If a fire starts higher up there’s a chance to get out, but if it starts on the ground floor and rises, there are no exits to escape.”

Mr. T said that the confusing layout at the An Phu karaoke parlor caused customers to panic.

“The lack of exits is why the number of deaths was so high,” he said.

“It is a natural reaction to run into a hiding place when you see fire, and that also led to some deaths. Some of them died because they locked the door to their room, while others ran up to a higher floor and jumped. I learned that some of those who jumped were hospitalized, but died in the hospital.”

Nguyen Van Hau, a Ho Chi Minh City-based attorney with the Vietnam Lawyers’ Association, agreed that safety violations were likely to blame for many of the deaths at An Phu.

“The central government has issued a number of decrees about fire issues,” he said, suggesting that local authorities have failed in implementing them.

He acknowledged that the customers at the karaoke parlor likely ignored warnings to flee, but said the establishment’s owner and city officials bear responsibility for the tragedy.

“The fire authority should regularly carry out inspections after granting permits, especially when any new construction is done,” he said.

“Furthermore, the management was not trained in how to react in case of a fire. The right to run a karaoke bar is contingent on making safety preparations.”

The manager of a store that sells fire equipment in Ho Chi Minh City, who spoke to RFA on condition of anonymity, said that fires at karaoke parlors and other venues that use significant amounts of power are typically caused by an electrical short.

He said that while officials had yet to conclude their investigation of the An Phu blaze, the chain of events suggests safety protocols had been skirted.

“The preliminary report about the fire by the Binh Duong Police said that the An Phu karaoke bar met all fire prevention requirements, but the guests continued to sing after the fire started,” he said.

“This suggests the building did not automatically cut off the electricity and there is a question of whether the fire alarm system even worked or not. There are a number of things to be examined, including whether there were lights at the exits and an emergency sprinkler system in the rooms and hallways.”

In 2016, a fire at an eight-story karaoke parlor in Vietnam’s capital Hanoi killed 13 people after spreading to several nearby buildings.

Translated by An Nguyen. Written in English by Joshua Lipes.