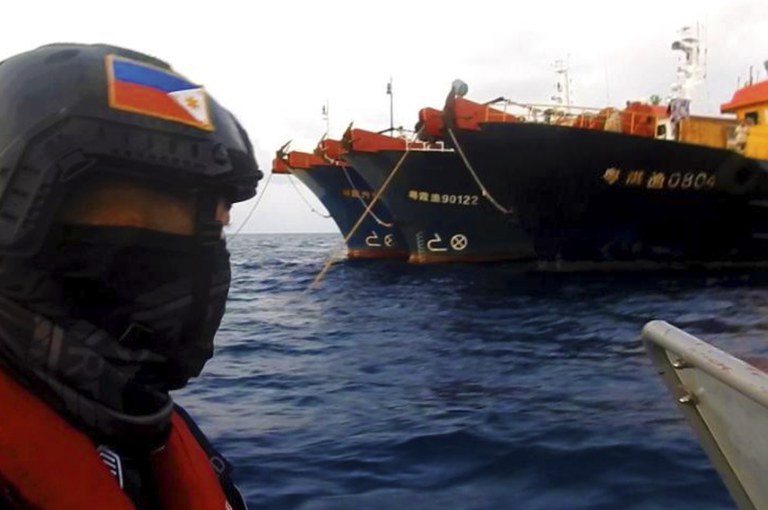 The Philippines said Thursday it had filed a new diplomatic protest against Beijing over the alleged return of a massive Chinese fleet operating “illegally” around Whitsun Reef, within Manila’s exclusive economic zone in the South China Sea.

The Department of Foreign Affairs made the announcement hours after U.S. Deputy Secretary of State Wendy Sherman met in Manila with President-elect Ferdinand Marcos Jr. as well as Foreign Secretary Teodoro Locsin Jr. during a visit that she said was part of “preserving a free and open Indo-Pacific.”

The department said it “protested the return of over 100 Chinese vessels illegally operating in the waters in and around Julian Felipe Reef on 04 April 2022, barely a year after the same swarming incident was protested by the Philippine government.”

In its statement, the department did not say when the diplomatic protest was filed nor if the ships remained at the reef. The department and the Chinese Embassy in Manila did not immediately respond to BenarNews requests for comment late Thursday.

Internationally known as Whitsun Reef, Julian Felipe Reef is described as “a low-tide elevation within the territorial sea of relevant high tide features” in the Kalayaan Islands in the South China Sea, the foreign office said.

“The lingering unauthorized presence of Chinese fishing and maritime vessels is not only illegal, but is also a source of instability in the region,” it said.

The statement noted that the “persistent swarming” of Chinese ships violated the U.N. Convention on the Law of the Sea and “the final and binding 2016 arbitral award” won by the Philippines over China. Moreover, it was a violation of a regional agreement to avoid actions that could inflame tensions, the department said.

In March and April, Philippine complaints about hundreds of Chinese ships and boats clustering in the waters of Whitsun Reef were the focus of bilateral tensions over the disputed sea.

The announcement about the latest protest came about 10 days after the department summoned a senior Chinese diplomat to protest the alleged harassment by the China Coast Guard of a joint Filipino-Taiwanese research ship in the South China Sea in April.

Earlier on Thursday, Sherman met with Marcos at his campaign headquarters where they were joined by the Philippine envoy to Washington, Jose Manuel Romualdez, as well as other officials.

Sherman and Marcos “agreed on the importance of partnering together to strengthen our economies,” according to the U.S. State Department.

“The deputy secretary and the president-elect highlighted the importance of the U.S.-Philippine alliance to security and prosperity in the Indo-Pacific region and the world,” the U.S. statement said.

Sherman, the highest ranking State Department official to visit since the pandemic, also paid a courtesy call on Locsin, the country’s top diplomat.

In a series of posts on Twitter, the Department of Foreign Affairs said Sherman and Locsin discussed “concrete ways to further enhance relations” amid a government transition.

Sherman’s visit to Manila marked the second leg of a four-nation Asian tour, which began in South Korea early this week and will take her to Laos and Vietnam.

During a stop in Hanoi scheduled for this weekend, the issue of China’s plans to build a navy base in Cambodia are likely to be on the agenda of Sherman’s talks with Vietnamese officials, diplomatic sources told RFA.