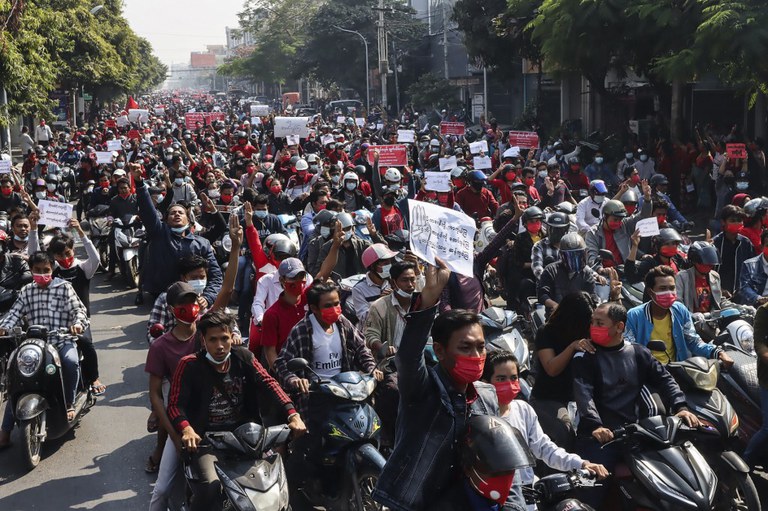 Myanmar’s junta is unlikely to sign off on an all-inclusive dialogue to resolve the country’s political crisis unless additional pressure is applied, observers said Monday, following calls by both the Association of Southeast Asian Nations (ASEAN) and China to allow all stakeholders to the negotiating table.

But sources in Myanmar told RFA Burmese that even if all sides of the political spectrum were represented at talks, compromise would be difficult because of how far apart their views are on how the country should be governed.

“It could happen if more international and domestic pressure mounted,” political analyst Than Soe Naing said of the likelihood of all-inclusive talks.

“Under the present circumstances, when [the junta has] some control over the country, they do not seem interested.”

Than Soe Naing noted that the junta is adamant about maintaining Myanmar’s 2008 Constitution, which grants the military 25 percent of parliamentary seats, giving it an effective veto on constitutional reform. The country’s shadow National Unity Government (NUG) and People’s Defense Force (PDF) paramilitary group say they will only negotiate with the junta if it completely withdraws from politics.

“They would have to reconcile that and I don’t think it will be easy. So I think [all-inclusive talks are] unlikely at the moment,” he said.

Additionally, Than Soe Naing said, there is nobody who can represent the deposed National League for Democracy (NLD) at negotiations with the junta because all of the party’s top officials were arrested in the aftermath of the military’s Feb. 1, 2021 coup.

The military claims voter fraud led to a landslide victory for Aung San Suu Kyi’s NLD in the country’s November 2020 election. The junta has yet to provide evidence of its claims and has violently suppressed nationwide protests calling for a return to civilian rule, killing 2,076 people and arresting 14,544 over the last 17 months, according to the Bangkok-based Assistance Association for Political Prisoners.

Junta chief Snr. Gen. Min Aung Hlaing agreed to pursue talks with all of Myanmar’s stakeholders following an emergency ASEAN meeting on the situation in the country in April 2021, but has yet to do so. Calls for such a dialogue were reiterated by ASEAN Special Envoy for Myanmar Prak Sokhonn during his June 29-July 2 trip to Myanmar and again, days later, by Chinese Foreign Minister Wang Yi during a meeting with his junta counterpart Wunna Maung Lwin.

On Sunday, U.S. Secretary of State Antony Blinken Thailand along with ASEAN members and China to push the junta to end violence against its people and follow through on its pledge at last year’s ASEAN meeting, following a meeting in Bangkok with Prime Minister Prayuth Chan-o-cha.

‘Up to the people’

Nai Than Shwe, a spokesman for the Mon Unity Party (MUP) who met with Sokhonn during his visit, told RFA on Monday that the junta must have a desire for dialogue if all-inclusive talks are to take place.

“If the junta takes the initiative, anything is possible. But it’s up to the junta whether or not a dialogue will happen,” he said.

An abbot of the Mandalay Sangha Union of Buddhist monks told RFA that ASEAN and China are advocating for all-inclusive talks in the hopes of a return to the status quo in Myanmar.

“The dialogue that both ASEAN and China are pushing for is, in short, nothing more than a return to quasi-military rule we used to have before the coup,” he said, speaking on condition of anonymity.

“However, the kind of negotiations called for by the NLD cannot end there. If they do, the people will not accept it.”

He noted that the military, the NUG, and the PDF have all said they have no interest in negotiations, “so it is up to the people to make it happen.”

A spokesman for the anti-junta People’s Defense Battalion No. 2 in Mon state’s Thaton township, who also declined to be named, echoed the abbot’s suggestion that the people of Myanmar must push for an all-inclusive dialogue.

“Most of our PDF units … do not want discussions or negotiations with them,” he said.

“Given our military momentum and the participation of the people, as well as growing international pressure, we have no reason to discuss anything with them at this time. They are actually looking for a way out … But if the people want us to do it, we will do it.”

Junta Deputy Information Minister Maj. Gen. Zaw Min Tun had earlier told RFA that the junta would not hold talks with those facing trial or with the NUG and PDF, who it has labeled “terrorists.” However, following the visits of the ASEAN and Chinese envoys, he told the BBC in an interview that “nothing is politically impossible.”

The NUG is adamant that it will not hold talks with the junta. Attempts by RFA to contact Kyaw Zaw, a spokesman for the office of NUG President Duwa Lashi La, for comment on the shadow government’s latest position went unanswered Monday.