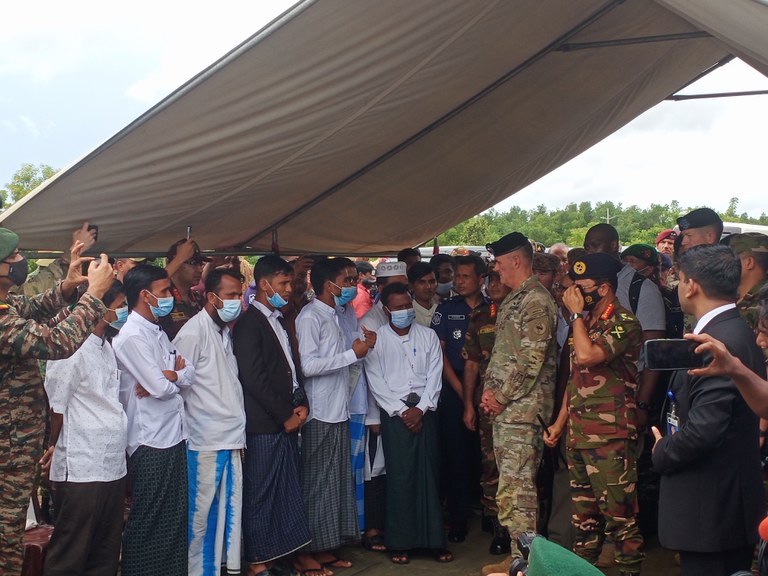 Hundreds of people were waiting to cross into Bangladesh from Myanmar, a small group of newly arrived Rohingya told BenarNews, amid fierce fighting close to the border that has sparked diplomatic protests over reports of artillery and mortar shells landing in Bangladeshi territory.

One of the new arrivals said he saw “several hundred” people clustered along a river that separates Cox’s Bazar district in southeastern Bangladesh from Myanmar’s Rakhine state, and who were trying to cross the frontier several days ago. It was not immediately clear what happened to those other people apparently displaced by intense clashes in recent weeks between Burmese junta forces and Arakan Army (AA) rebels.

In Bangladesh, where the government has tightened security along the border amid the violence in Rakhine, authorities have not confirmed reports of any new refugee arrivals or influx into Cox’s Bazar.

Meanwhile, a Rohingya leader said that at least five Rohingya fleeing Myanmar had arrived at a Cox’s Bazar camp in recent days.

The adults were identified as Abul Wafa, his wife, Minara, and another woman, Dildar Begum.

Wafa said they fled from Buthidaung in Myanmar on Sept. 6 as junta and AA forces clashed.

“The junta started torturing the Rohingya in Buthidaung,” he told BenarNews. “That’s why we came to Bangladesh to save our lives, but we are also hiding here.”

“When we were entering Bangladesh, we saw several hundred Rohingya people, mostly women and children waiting to leave near the Naf River,” Wafa said.

Two days earlier, on Sept. 4, the Foreign Ministry issued a news release expressing “deep concern” over mortars that reportedly landed on the Bangladeshi side of the frontier the day before. The release noted that Myanmar Ambassador U Aung Kyaw Moe was summoned regarding the incident, just as he had been summoned on Aug. 21 and 28.

“During the meeting, the ambassador was also told that such activities are of grave threat to the safety and security of the peace-loving people, violation of the border agreement between Bangladesh and Myanmar and contrary to the good neighborly relationship,” the ministry said.

On Tuesday, Home Minister Asaduzzaman Khan Kamal said he expected firing inside Myanmar along the border to end soon.

“Our Border Guard Bangladesh (BGB), as well as Foreign Ministry, have strongly protested the incidents by calling the ambassador of Myanmar.”

Jubair said Wafa and the others sheltered with a relative after arriving in Bangladesh before moving into another camp.

Wafa said his group gave a boatman a piece of gold jewelry to carry them across the Naf River because they had no money to pay him.

Dildar Begum, 22, said her husband, Syed Ullah, was killed by the “Mogh army” a month ago. She was referring to the Arakan Army although “Mogh” is a term that Rohingya also often use to refer to the Burmese military.

“I fled with Wafa’s family to Bangladesh as there was no other option for me,” she told BenarNews.

In Rakhine state, an official with the AA rebels denied that the group was targeting members of the stateless Rohingya Muslim minority.

“The allegations on AA targeting Muslims are not just wrong but baseless accusations, because the fighting [in the state between Arakan Army and junta troops] has been more than a month,” Khine Thu Kha, a spokesman for the rebel group, told RFA Burmese.

“We want to question back, did you guys see or hear any report of a Muslim killed or injured by the fighting? Did you hear any report or see anyone saying there was a shell or a bullet from AA falling in a Muslim village so far? Otherwise, it is just an accusation with other intentions to defame our organization.”

Despite the claims made by the Rohingya, Md. Shamsud Douza, Bangladesh’s commissioner for Refugee Relief and Repatriation, said there was no official information about any new arrivals from Rakhine state infiltrating Bangladesh territory.

“Clashes are occurring between two groups in Myanmar. It is very normal that it will create some tension on our border as a neighboring country,” he told BenarNews. “Our decision is very clear – we cannot allow even a single Rohingya to enter Bangladesh.”

Robiul Islam, additional superintendent of police, said his unit was “not sure about a fresh entry of Rohingya but we are looking into the matter.”

Sheikh Khalid Mohammad Iftekhar, a senior official of Border Guard Bangladesh, said the border police force had tightened security at the frontier to prevent any attempts by refugees to enter the country. From January to June, 478 Rohingya were denied entry and four were arrested, according to the BGB.

A Rohingya who lives in Maungdaw, Myanmar, and asked to not be named for security concerns, said that the increasing conflict in the state had dampened Rohingya hopes for repatriation.

“It will be difficult for them to return in this situation. The current situation will not allow them to come here,” the resident told RFA.

“The situation here is not very good. There is no security. People here are fleeing to other areas because fighting is going on. In this situation, they will not be able to come back.”

Fighting between the military and the AA resumed in July. Oo Maung Ohn, a resident of Maungdaw Township, blamed the resurgence in Rakhine State after a nearly two-year ceasefire on the junta.

“Do you know why all this fighting resumed? They (the junta) closed the roads and started the fighting and they arrested many innocent people,” he told RFA. “They arrested village administrators, questioned them and hit them.”

Meanwhile, top army officers from 24 countries, including the United States, China and India, who were taking part in a conference in Dhaka, took a side trip on Tuesday to visit the Rohingya refugee camps in Cox’s Bazar.

The delegation, including Bangladesh Army Chief Gen. S.M. Shafiuddin Ahmed and Gen. Charles A. Flynn, the American army chief in the Indo-Pacific, spoke with Rohingya leaders at the camps. The U.S. military did not immediately release details of those discussions.

While delivering the keynote address during the first day of the conference on Monday, Prime Minister Sheikh Hasina warned that the prolonged stay of more than 1 million Rohingya in the crowded Cox’s Bazar camps had become a serious security and stability concern.

Most of those refugees, about 740,000, fled from Rakhine state during a Myanmar government crackdown five years ago. Within months, Bangladesh and Myanmar officials agreed to repatriate the Rohingya, but none have returned to their homeland under the program.

Ahammad Foyez in Dhaka and RFA Burmese contributed to this report by BenarNews, an RFA-affiliated news service.