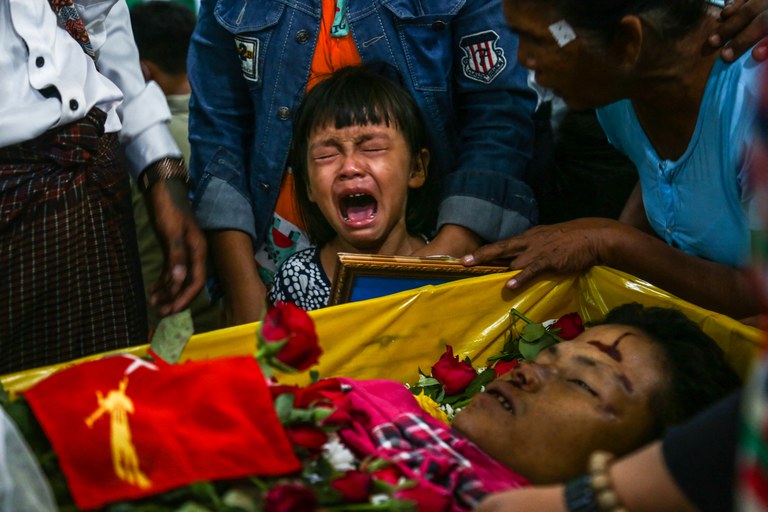 More than 5,600 civilians have been killed in Myanmar since the military seized power last year, according to a new estimate by an independent research institute, which called the death toll “unprecedented” in the country’s history.

The Institute for Strategy and Policy (ISP Myanmar) said in a report last week that it had documented at least 5,646 civilian deaths between the Feb. 1, 2021, coup and May 10, including people killed by security forces during anti-junta protests, in clashes between the military and pro-democracy paramilitaries or ethnic armies, while held in detention, and in revenge attacks, including against informers for the regime.

At least 1,831 civilians were killed in shooting deaths, the largest number of which occurred in war-torn Sagaing region, where junta troops have faced some of the toughest resistance to military rule in clashes with People’s Defense Force (PDF) paramilitaries that have displaced tens of thousands of residents since the coup.

The numbers are largely in line with reporting by RFA’s Myanmar Service, which had documented at least 5,683 civilian deaths between the military takeover and May 12. On May 10 alone, junta troops slaughtered 29 civilians in Mon Taing Pin village, in Sagaing region’s Ye Oo township, sources recently told RFA, saying the victims appeared to have been “killed and burned intentionally” by soldiers targeting residents in retaliation for alleged ties to the PDF.

ISP Myanmar said at least 3,107 civilians were killed after being named “Dalans,” or military informants, based on statements issued by the junta on Jan. 14 and by the chairman of the military proxy Union Solidarity and Development Party, Than Htay.

A member of the PDF in Sagaing region told RFA on condition of anonymity that those who report paramilitary movements to the military have been targeted because the armed opposition is “handicapped in manpower and weapons.”

“If these pillars supporting the junta are not removed in time, they will report every movement of ours to the military,” he said.

“If the military finds out about our movements, they can easily crush our defenses on the ground. The military would always have the upper hand.”

A similar form of revenge killing is on the rise with the emergence of the pro-junta Thway Thauk, or Blood Comrades, militia, whose members have killed at least 18 people — mostly members of the deposed National League for Democracy party and their relatives — in Mandalay region.

Kyaw Htet Aung, a senior researcher at ISP Myanmar, called the death toll since the coup “unprecedented” in the history of Myanmar.

“We are seeing pressures and reactions that are unprecedented in Myanmar’s history. As clashes between the two sides increased, so did civilian casualties. I think that’s the main reason why civilian deaths are the highest that have ever been in the post-independence era [beginning in January 1948],” he said.

“One side is operating under the belief that the junta cannot be allowed to rule at all. But the junta is determined to work towards stability and dominance at all costs. So, I think the civilian casualties have increased because of these clashing ideologies.”

Peace and security in Myanmar have been shattered, Kyaw Htet Aung said, and “people are living in fear.”

“These groups rarely provide true and accurate information,” he said.

“We are publishing daily updates on what is happening. We can just ignore [the estimated death toll]. We don’t need to respond to them.”

“It’s unfortunate that our fellow citizens are being killed in such ways,” he said.

“Instead of carefully trying to understand the cause of why all this is happening, people have become accustomed to arming themselves and killing at will. It’s not right to say, ‘You’re my enemy if you’re not with us.’ It’s a matter of grave concern for the future of our country.”

Nanda Hla Myint urged both sides to “use wisdom to think and act correctly” before resorting to bloodshed.

“The main thing is to be able to think carefully. We need to have the wisdom to think and see correctly.”

“People are suffering,” he said. “[But] if all stakeholders with the power to make decisions operate under this kind of mindset, there is nothing that is unresolvable.”

The latest death toll statistics came as Myanmar’s shadow National Unity Government (NUG) called the decision not to invite junta representatives to last week’s U.S.-ASEAN Summit in Washington, while allowing NUG officials to engage with their counterparts there, “a major setback” for the military regime’s international standing and “a win for the people of Myanmar.”

“Arranging a meeting with senior government officials is … a very good step for the NUG [and] a great result for the people of Myanmar,” said NUG President’s Office spokesperson Kyaw Zaw.

“This makes the military regime even more isolated. It’s a big diplomatic defeat and a source of shame for them.”

Myanmar was one of only two ASEAN countries whose rulers were not at the May 12-13 summit.

The Philippines was represented at the summit by its foreign minister as it wrapped up a presidential election, while Myanmar’s junta chief, Sen. Gen. Min Aung Hlaing, was barred from the gathering for the brutal crackdown on opponents of his regime.

While absent in Washington, the country the U.S. still officially calls Burma was much on the agenda of its fellow ASEAN members.

Malaysian Foreign Minister Saifuddin Abdullah called out junta officials in a series of tweets for failing to honor their commitment to end violence in the country, while U.S. Deputy Secretary of State Wendy Sherman held a meeting with NUG Foreign Minister Zin Mar Aung. The meeting between U.S. and NUG officials drew swift condemnation from the junta, which has labeled the shadow government and the PDFs that fight in its name “terrorist organizations.”

Prior to her departure, Zin Mar Aung told a meeting of Burmese expatriates in Washington that during the summit the U.S. and ASEAN came to an agreement with the junta that satisfied conditions set by the NUG for providing humanitarian assistance to refugees displaced by conflict in Myanmar after she explained the situation to the bloc’s member states and United Nations aid agencies.

“We’re working to have humanitarian aid reach the [refugees] and those who really need it,” she said.

“The military cannot do this alone — it can only be accomplished if they work with us. We want to ensure that those providing aid do so in a transparent manner. … The U.S. accepted [these conditions] and ASEAN did as well.”