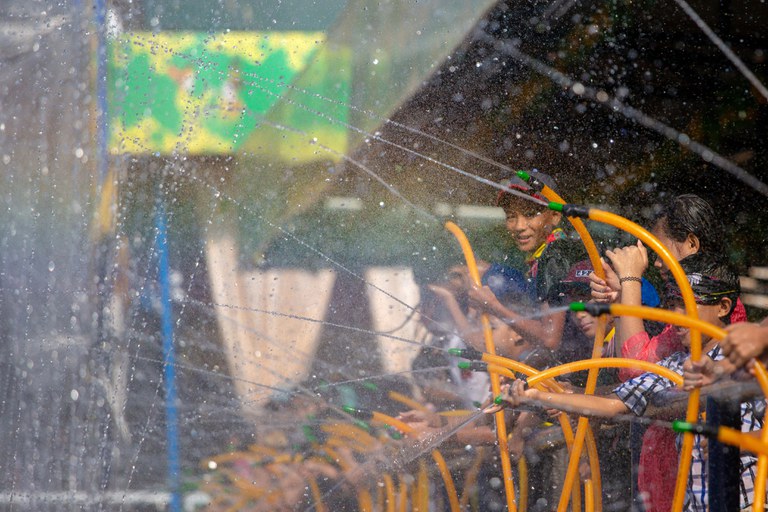 Yangon and Mandalay were eerily quiet on Wednesday despite the start of the three-day Thingyan holiday in Myanmar, as residents chose to boycott junta-led festivities and heed warnings by armed opposition forces that the cities could become the target of attacks.

On the eve of the April 13-16 New Year Water Festival, the main pavilion in front of Yangon’s City Hall — traditionally bustling with revelers on the holiday — was empty. Dozens of police and soldiers were seen guarding the area, and the military blocked off access to the pavilion as well as the mayor’s office. Trucks were seen ferrying people in uniforms to the venue.

While the junta has sought to promote this year’s Thingyan as a time to unwind and have fun, members of the public told RFA’s Myanmar Service they have little interest in participating.

One resident of Yangon said he would not join celebrations out of respect for those who sacrificed their lives while protesting the military’s Feb. 1, 2021, coup.

“There are many children, young people and adults who have given their lives for the country and for justice. I sympathize with them. I feel sorry for them, and I won’t go out at all,” said the young man, who spoke on condition of anonymity. “Also, there have been warnings against participating in the festivities. It’s up to you to take the risks.”

A woman from Yangon’s Pazundaung area who gave her name as Rati told RFA she would not attend Thingyan, or any other festivals held under the military regime.

One of the few places in Yangon where people congregated on Wednesday was at the city’s holy Shwedagon Pagoda, where religious pilgrims said they hoped to perform good deeds and gain merit during Thingyan, while also praying for those who are in prison or have otherwise suffered under junta rule.

Separately, sources told RFA that at least one deliveryman was killed, and others arrested amid heightened security and roadblocks in Yangon.

Workers said that three young delivery men from the Food Panda restaurant on Po Sein Road were talking in front of the shop Wednesday morning when junta troops arrived, causing them to panic and flee. They said troops opened fire as the men ran away, killing Hein Htet Naing, while the other two workers, identified as Tin Tun Aung and Kyi Thar, were taken into custody.

Other sources said that around eight delivery men were arrested in the city on Wednesday. RFA was not able to independently confirm the incidents.

In Mandalay, Myanmar’s second-largest city, the military tightened security around the Palace Moat, which is traditionally the center of Thingyan celebrations each year, and blocked the entrance to the city’s main pavilion.

A resident of Mandalay, who also declined to be named for security reasons, said people “understand the current situation” and would heed the call to boycott the festivities.

“Thingyan is a period for us to celebrate. We all know we can only enjoy it once a year. But today, people are all united,” she said. “The city is like a ghost town. No one is celebrating or partying. They obey the requests of the revolutionary forces.”

Warnings to the public

On Monday, various armed resistance groups told RFA that they had launched a dozen attacks on military-held areas of Myanmar’s commercial capital Yangon over the weekend as part of a bid to dispel junta claims that the situation in the country had “returned to normal.”

Anti-junta People’s Defense Force (PDF) paramilitary groups had announced that they plan to launch attacks on the military during Thingyan and warned members of the public to stay away from the brightly colored pandal platforms that the government typically erects as performance stages and water-spraying stations for the holiday.

On Tuesday, a body of opposition stakeholders known as the National Unity Consultative Council (NUCC) called on artists and celebrities to boycott junta-led Thingyan festivities, condemning what it said was a bid by the military regime to make political gains while the nation is embroiled in post-coup violence.

In a statement, the NUCC said that authorities are “conducting raids, making arbitrary arrests, and committing murder” around the country, and suggested the junta may take advantage of the festival to “launch more attacks.”

“Many, including the urban anti-junta forces and the PDFs, are urging people not to participate in the celebrations sponsored by the junta,” NUCC member Toe Kyaw Hlaing said. “We also condemn the military’s attempt to make political gains, and therefore we have issued this statement in support of both the opposition and the PDFs.”

Attempts by RFA’s Myanmar Service to contact actors and musicians for comment went mostly unanswered, although well-known singer May Khalar said that she will not be performing at any of this year’s Thingyan pandals.

Maj. Gen. Zaw Min Tun, the junta’s deputy minister of information, told RFA on Tuesday that Thingyan festivities will be held “in safe places across the country,” including cities such as Yangon, Mandalay and the capital Naypyidaw.

He dismissed the boycott, saying that Thingyan celebrations should not be politicized.

“The Thingyan festival is celebrated every year. It has nothing to do with whether you support the government,” he said. “Celebrating Thingyan is a Myanmar cultural tradition. Using threats to stop people from celebrating is an act of terrorism.”

Zaw Min Tun noted that armed attacks and bomb blasts had “become more frequent” as Thingyan approached, referring to the targeting of authorities by anti-junta forces.