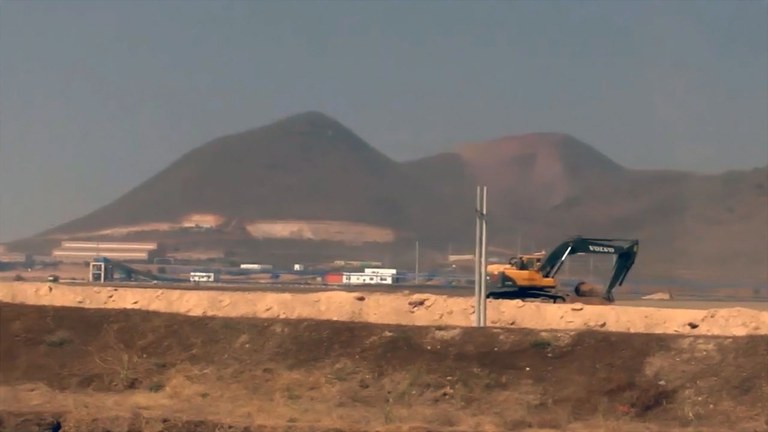 Myanmar’s junta has vowed to defend a suspended Chinese copper mine, seen as a key source of revenue for the military regime, after the country’s armed opposition threatened to destroy the project if owners resume operations.

The Letpadaung copper mine in Sagaing’s Salingyi township is a joint venture between China’s state-owned Wanbao Co. and the military-owned Myanmar Economic Holding Limited (MEHL) company. Following the military’s Feb. 1, 2021 coup, employees walked off the job to join the anti-junta Civil Disobedience Movement (CDM), reducing the mine’s operating capacity by more than 80 percent.

In early April, junta Foreign Minister Wunna Maung Lwin met with his Chinese counterpart Wang Yi in eastern China’s Anhui province in what analysts said signaled Myanmar’s desire for deeper economic ties to its northern ally. Not long after the trip, residents of Salingyi reported that workers were being called back to the mine to restart the project after more than a year of downtime, prompting threats from anti-junta People’s Defense Force (PDF) paramilitaries.

Late last week, junta Deputy Information Minister Maj. Gen. Zaw Min Tun told RFA’s Myanmar Service that the military would deploy troops to protect the mine in the event of an attack.

“As a government, we have a responsibility to protect all investments in the country, both legally and on the ground, and we must work to provide security for them,” he said, adding that the junta is “working to get things back on track” at Letpadaung.

Zaw Min Tun didn’t provide details on the status of the mine or whether any other foreign projects had come under threat.

His comments came in response to an April 21 joint statement from 16 PDF groups from Salingyi and nearby Yinmarbin townships threatening to destroy the mine if Wanbao brought it back online.

A spokesman from the NRF, one of the PDF groups that issued the warning, told RFA that Chinese and other foreign-owned assets in Myanmar qualify as fair game for the armed opposition if they are generating income for the junta.

“If the military can purchase weapons with that money, the people will suffer further persecution,” he said, calling the statement a warning to other foreign companies in Myanmar “earning money that will be used [by the junta] to buy bullets to kill people.”

Sit Naing, a spokesperson from the Salingyi PDF, clarified that the groups “don’t have a plan to attack foreigners,” but said if foreign companies “keep working with the military and take part in persecuting the people, we will have to attack them, without fail.”

Zin Mar Aung, foreign minister for Myanmar’s shadow National Unity Government (NUG), to which the prodemocaracy PDF has pledged its loyalty, expressed disappointment with China for its support of the junta in a recent statement.

Reports that operators are restarting the 60-year-old Letpadaung copper mine project – which has already faced criticism for appropriating land from 26 area villages and damaging the environment with chemical waste and dust – have also prompted opposition from Myanmar’s civilian population.

Residents of Letpadaung have held daily protests demanding that Beijing respect the wishes of the people of Myanmar by shutting the mine down, and on April 25, nearly 560 prodemocracy groups sent an open letter to Chinese President Xi Jinping urging him to stop supporting the junta through the mine and other China-backed development projects.

In an interview with RFA, a member of the CDM in Salingyi called on all copper mine staff to remain in the movement, even if they are called back to work by Wanbao.

“As the project is directly affiliated with the junta, we are urging staff to hold out and refuse to return to work to resume operations, no matter how much incentive the company offers,” the CDM member said.

“We ask that they go back to work only when the country is liberated.”

Other sources were more direct in their condemnation of China, including a Salingyi township protest organizer who noted that Beijing has been backing the junta for much of the 15 months since the military’s coup.

“They don’t give priority to the people, and they are prioritizing our enemy the military’s leader [Snr. Gen. Min Aung Hlaing], so China is our common enemy,” she said.

“I want to appeal the workers to stand with the people. No matter how many incentives or extra salary they offer, don’t consider working for the enemy.”

In response to an RFA email seeking comment on the situation in Salingyi, China’s embassy in Yangon said that Chinese projects in Myanmar “are meant to benefit Myanmar’s economic development, bilateral interests, and the livelihoods of the local people.”

According to Myanmar’s Institute for Policy and Strategic Studies, 32 Chinese garment factories were set on fire in the early months of the coup, while PDF attacks on Chinese projects have damaged the water supply pipeline to the Letpadaung project, as well as a gas pipeline and nickel plant in Mandalay region.

A Myanmar-based analyst on China-Myanmar relations, who declined to be named, said the NUG’s statement was a “warning” to China, emboldening local PDF groups.

“The PDFs are trying to make China reconsider whether the junta can effectively protect its interests, after it offered support to the junta,” the analyst said.

“China should reassess who is really in control on the ground … We will have to wait and see if they decide to negotiate with the NUG after they do so.”