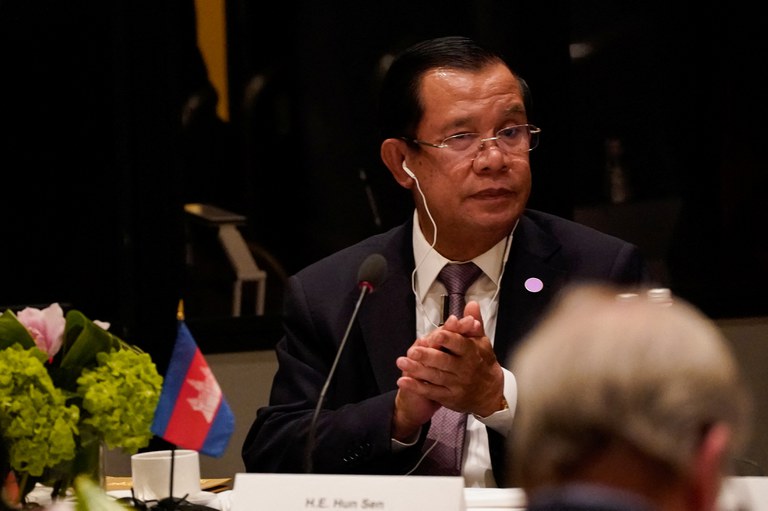 The ongoing upheaval in Myanmar took center stage on the first day of a U.S.-ASEAN Summit in Washington, as fellow bloc member Malaysia slammed the junta for refusing to engage with the country’s shadow government.

Association of Southeast Asian Nations (ASEAN) leaders held a lunch meeting with House Speaker Nancy Pelosi and other lawmakers at the U.S. Capitol on Thursday to kick off two days of top-level meetings, which President Joe Biden hopes will bolster Washington’s ties with the bloc and increase its influence in the region.

Eight of ASEAN’s leaders made the trip to the U.S. for the summit, which marks the first time the White House extended an invitation to the group of nations in more than four decades. The Philippines declined to attend as it wraps up a presidential election this week, while Myanmar’s junta chief, Snr. Gen. Min Aung Hlaing, was barred from the summit amid a brutal crackdown on opponents of his military’s Feb. 1, 2021, coup that rights groups say has claimed the lives of at least 1,835 civilians.

U.S. State Department officials instead met with the foreign minister of the National Unity Government, Myanmar’s shadow government of deposed leaders and other junta critics working to take back control of the country.

The lunch event on Capitol Hill was closed to the press, but the situation in Myanmar was front and center on Thursday, after Malaysian Foreign Minister Saifuddin Abdullah called out junta officials in a series of tweets for failing to honor their commitment to end violence in the country. Specifically, he referred to the military regime’s refusal to allow the United Nations special envoy to the country, Noeleen Heyzer, to attend an ASEAN meeting last week to coordinate humanitarian aid to Myanmar.

“We regret that the [junta] has not allowed the U.N. Secretary General’s Special Envoy on Myanmar to participate in the processes,” Saifuddin tweeted.

“We should not allow [the junta to be] dictating who to be invited for related meetings.”

Saifuddin said he made clear at an informal meeting with ASEAN foreign ministers on Wednesday that Malaysia fully supports Prak Sokhonn, the special envoy of ASEAN Chair Cambodia, “in fulfilling his mandate on [the] 5-Point Consensus” — an agreement formed by the bloc in April 2021 that requires the junta to meet with all of Myanmar’s stakeholders to find a solution to the political crisis.

He said he called on the ASEAN envoy to “engage all stakeholders, including [shadow National Unity Government] NUG and [National Unity Consultative Council] NUCC representatives,” both of which are recognized by the junta as “terrorist groups.”

Saifuddin’s comments came a day after he told the RFA-affiliated BenarNews agency that he welcomed the idea of engaging informally with the NUG and NUCC via video conference calls and other means if the junta prohibits such meetings in-person.

The Malaysian foreign minister said he plans to meet with NUG Foreign Minister Zin Mar Aung in Washington on Saturday to solicit her opinion on how the people of Myanmar can move on.

As ASEAN leaders lunched with lawmakers on Thursday, U.S. Deputy Secretary of State Wendy Sherman held a meeting with Zin Mar Aung and other NUG representatives in Washington during which she underscored the Biden administration’s support for the people of Myanmar during the crackdown and for those working to restore the country to democracy, according to a statement by spokesperson Ned Price.

“Noting the many Southeast Asian leaders in Washington for the U.S.-ASEAN Special Summit, the deputy secretary highlighted that the United States would continue to work closely with ASEAN and other partners in pressing for a just and peaceful resolution to the crisis in Burma,” Price said, using the former name of Myanmar.

“They also condemned the escalating regime violence that has led to a humanitarian crisis and called for unhindered humanitarian access to assist all those in need in Burma.”

In the evening, they joined Biden for dinner at the White House to discuss ASEAN’s future and how the U.S. can play a part, according to media reports, which quoted senior administration officials as saying that each leader would be given time to meet with the president one-on-one.

On Friday, leaders will meet with Vice President Kamala Harris and Secretary of State Antony Blinken for a working lunch to discuss issues such as the COVID-19 pandemic, the global climate, and maritime security, before meeting with Biden for a second time.

While some ASEAN leaders have been more outspoken in their condemnation of the junta, others —including Cambodian Prime Minister Hun Sen, who is also the bloc’s chair — have done little to hold it to account for the situation in Myanmar.

In January, Hun Sen became the first foreign leader to visit Myanmar since the military coup — a trip widely viewed as conferring legitimacy on the junta.

Hun Sen is no stranger to global condemnation, however. The Cambodian strongman brooks no criticism at home and has jailed his opponents on what observers say are politically motivated charges in a bid to bar them from mounting a challenge his nearly 40-year rule.

This week’s summit marks Hun Sen’s fourth visit to the U.S., following trips to attend his son’s graduation from West Point in 1999, the 2016 U.S.-ASEAN Summit with President Barack Obama at the Sunnylands Retreat in California, and a meeting at the United Nations in New York in 2018. Thursday’s dinner with Biden will be his first visit to the White House.

Prior to Thursday’s dinner, during a photo session with leaders on the South Lawn, Biden committed to spending U.S. $150 million on COVID-19 prevention, security, and infrastructure in Southeast Asia as part of a package his administration hopes will contain China’s growing influence in the region.

A U.S. Coast Guard ship will also be deployed to the region to patrol waters ASEAN nations say are illegally fished by Chinese vessels.

The U.S. commitment is a drop in the bucket compared to Beijing’s spending in the region. China earmarked 10 times as much in development assistance to ASEAN nations in November alone.