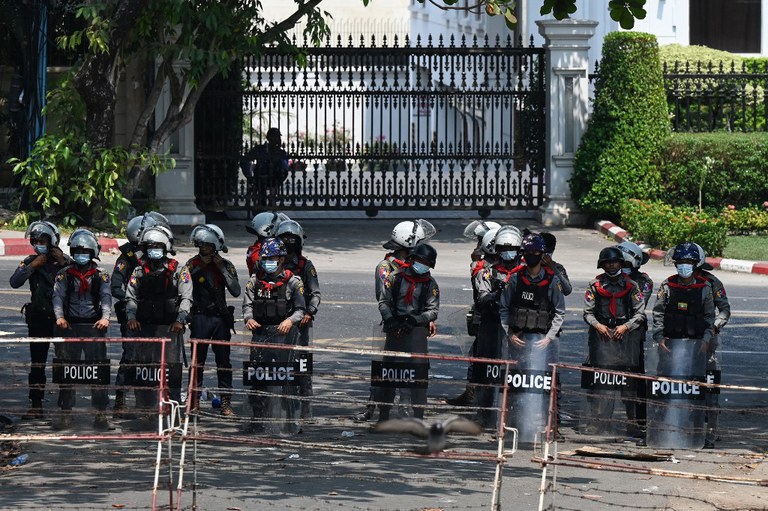 Myanmar’s 15-month-old military junta is suffering a diplomatic downgrade as Western and some Southeast Asian neighbors are withholding ambassadorial appointments to the country and increasingly meeting with elected officials overthrown by the army early last year, diplomats said.

The trend of posting a number two in missions comes as the junta has been shunned by the Association of Southeast Asian Nations (ASEAN), which held a summit last week with the U.S. in Washington, where Myanmar was represented by an empty chair symbolizing rejection of the February 2021 coup.

The Australian Foreign Ministry said in a statement on May 16 that Australia has appointed a senior official to replace its ambassador in Myanmar, Andrea Faulkner, who completed her tenure last month.

Britain likewise downgraded its ties with Myanmar from ambassadorial level to chargé d’affaires level in August 2021. The junta found that unacceptable and the British Ambassador, Pete Vowles, who went abroad on business, was barred from re-entering the country in February 2022.

“The UK has a longstanding policy and practice of recognizing states, not governments,” Stephen Small, the embassy’s liaison officer, wrote in an emailed reply to RFA’s Myanmar Service.

“We are engaging with the junta only where strictly necessary to deliver our political, development and humanitarian objectives and [for] the functioning of our embassy,” he added.

“Changing the status of our head of mission ensures we can continue our role supporting the people of Myanmar without giving the military credibility by presenting our credentials to the Commander-in-Chief,” said Small.

Vowles arrived in Myanmar in August 2021, seven months after the coup, and refused to hand over his credentials to the junta. In April the military regime told the embassy it would not accept him as ambassador any longer, the spokesman said.

London did not recall Vowles, but decided to let him head the mission at a lower level and he is waiting for a new visa and entry permit for Myanmar, said Small.

“I can confirm that the German Embassy in Yangon, where we continue with our embassy work, is headed by a chargé d’affaires,” he wrote in an email to RFA.

“The reduction from ambassadorial level to charge d’affaires, is, in layman’s terms, degrading,” said Kyaw Swa Tun, the third secretary at the Myanmar Embassy in Washington who joined the opposition after the coup.

“It’s like saying we don’t need to pay attention to an unethical group,” he told RFA.

“At present, most countries, including Europeans, have lowered their statuses in dealing with the regime. It also shows that they are not recognizing the junta and thus, the junta’s role is downgraded,” added Kyaw Swa Tun.

Min Zaw Oo, executive director of the Myanmar Institute for Peace and Security said countries lowered the level of their diplomatic representation to avoid the poor optics of recognizing the junta. The regime is estimated to have killed at least 5,600 civilians in nearly 16 months since the coup.

“When an ambassador comes in, he has to be officially recognized by the head of state. So, they do not want a big blaring photograph in the newspapers showing the current junta leader accepting their new ambassadors,” he said.

The U.S., European Union and Japan, however, are maintaining ambassadors at their embassies in Yangon.

Hiram J. Ríos Hernández, spokesman for the U.S embassy in Yangon told RFA in an email that the US will continue to put pressure on the junta to return to the path of democracy in Myanmar.

“Amb. Thomas Vajda presented his credentials to democratically elected President U Win Myint on January 19, 2021,” he told RFA by email.

“The U.S. will continue to press the military regime to cease its violence, release all those unjustly detained, provide unhindered humanitarian access, and restore Burma’s path to democracy.”

Outreach to the NUG

The European Union (EU) embassy in Yangon has said it will not change its current ambassadorial post, a spokesperson told RFA on behalf of Amb. Ranieri Sabatucci.

“The EU does not envisage any change to my accreditation for the time being. The movements in the diplomatic sphere do not have any effect on our dealings with the military council,” he said, using a shorthand for the junta.

Germany and Britain, the colonial ruler of what was formerly called Burma, and the EU have held meetings with representative of the country’s National Unity Government (NUG), a parallel administration made up of former lawmakers and officials of the government of leader Aung San Suu Kyi.

“The federal government in Germany has spoken to individual members of the NUG. These exchanges have been made public,” said Lubawinski.

“The U.K. sees the NUG as an important stakeholder for resolving the crisis,” said Small of the British Embassy.

“The EU is having informal exchanges with the NUG. These are entertained by and from a number of interlocutors including our HQ in Brussels, the EU Mission to ASEAN and the EU Mission to the UN in New York,” said the EU mission in Yangon.

“The EU retains the right to entertain relationships with any relevant party in Myanmar, including the NUG,” the statement issued on behalf of Sabatucci.

Analyst Kyaw Swa Tun said that although the NUG has not yet been officially accepted by the international community, these contacts can been as a sign the group in increasingly being recognized as a legitimate government.

Zin Mar Aung, who represents the NUG on the world stage, held key meetings on the sidelines of the U.S.-ASEAN summit in Washington last week with Wendy Sherman, a senior U.S. State Department official, and Malaysian Foreign Minister Saifuddin Abdullah. The junta strongly denounced those contacts.

Among ASEAN states, Malaysia, which recalled its ambassador last April, Brunei, and the Philippines have yet to appoint an ambassador to Myanmar.

Russia and China, authoritarian powers which have good military and economic ties with the junta, have not changed the status of diplomatic relations, while India and Saudi Arabia officially appointed their ambassadors to Myanmar last month. China’s mission did not reply to RFA’s attempt to seek comment.

Spokesman Maj. Gen. Zaw Min Tun said the junta is “will continue to work with countries who show respect to Myanmar and its national interests and other international organizations that support our work and consider us friends.”

He added: “There are people who want to interfere in [our] internal affairs. We will respond to them in accordance with diplomatic procedures.”