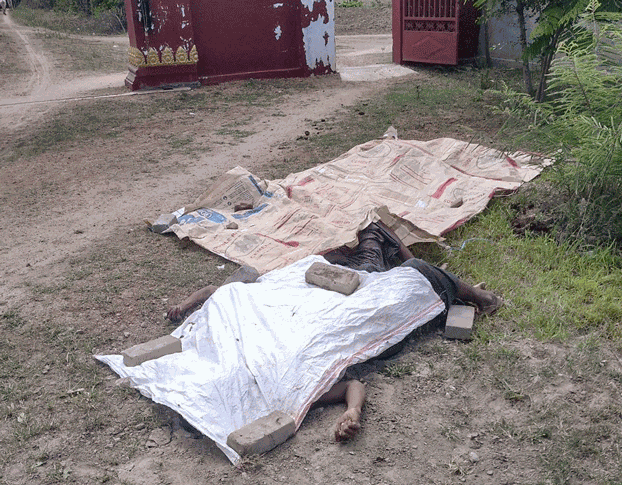 Eleven civilians were shot dead or burned to death by military junta troops in northwestern Myanmar’s Sagaing region after the soldiers found a weapon in a pagoda compound where the displaced villagers had sought shelter, local residents said Wednesday.

Junta forces shot six of the civilians from Kan Pyar village in Myinmu township in the back on Monday after they ordered them to run. Another three were shot to death after they were told to place their hands on their heads when soldiers found the homemade pistol during a raid on the Myat Saw Nyi Naung pagoda, the sources said.

Two other villagers were trapped in a burning Buddhist monastery and burned to death, they said. Soldiers also torched more than 100 motorcycles inside the pagoda compound where the residents were sheltering.

Sagaing has been the site of some of the fiercest fighting between the junta troops and opposition forces since the military seized power in a February 2021 coup. Villagers have said junta forces have also indiscriminately attacked communities, killing civilians, torching homes and forcing thousands to flee in search of safety.

An estimated 336,600 people have fled Sagaing since the coup, according to the U.N. High Commissioner for Refugees.

The ages of those who were executed ranged from 17 to over 60 years old, locals said. Ten of the 11 victims have been identified: Myint Oo, Nay Zar Aung, Yupar, Aung Min Khaing, Hla Soe, Paing Paing, Mae Gyi, Thura, Tin Htwe and U San.

A villager who requested anonymity for safety reasons said soldiers committed the “heinous crime” after they arrived in the pagoda compound on Monday. The villager repeated accounts he had heard from those who witnessed the killings. He did not see them himself because he fled the area when the soldiers arrived.

He later returned and saw the dead bodies.

“They interrogated the [internally displaced persons] who are taking shelter [and] found a handmade pistol,” he said. “Then, they ordered the men to run on the count of three and shot them in the back. Six of them got shot and killed. All are local villagers. They got murdered for a small pistol.”

“Now, people are fearful,” he said. “They are too afraid to live in the village. It is heinous crime that they told the villagers to flee and shot them in the back.”

The soldiers ordered about 30 men to flee, killing six. They also detained and took away another 10, the villager said.

RFA could not contact the villagers who witnessed the incident because the soldiers had confiscated their mobile phones.

After the villagers buried the bodies on Wednesday, more residents left, too afraid to remain there, the source said.

‘More than an atrocity’

“I haven’t got the words to comfort them. I’m aghast,” he told RFA. “The soldiers made them watch their family members being shot and killed. This is more than an atrocity. I am heartbroken to see them crying their hearts out.”

A member of the Myinmu township People’s Defense Force (PDF) said members of the militia are providing medical treatment to villagers who were injured by the gunfire.

“They have contacted PDF troops and requested medical attention,” he said. “We went as far as they could come and gave them medical treatment. These civilians are fearful. This is like a scene from a movie. It was very brutal.”

RFA contacted junta spokesman, Maj. Gen. Zaw Min Tun, for comment, but he did not return the calls. He has repeatedly denied claims that Myanmar soldiers were raiding villages and terrorizing residents.

“This is a brutal crime in which local civilians were murdered, and it has further frightened them on purpose,” he said. “It did not come about by accident because the village is closed to the conflict area. This was intentional.

“They are burning villages and murdering civilians while there are not armed conflicts,” he added. “I think this could even mean they are attempting a genocide.”

Junta soldiers also targeted Sagaing’s Kanbalu township on Monday, burning more than 250 houses and 65 granaries with at least 6,500 bushels of rice paddy during a raid of two villages, said residents who watched the destruction as they hid nearby when troops entered their community.

A Shaw Hpyu Kone resident who lost both his home and his harvested rice paddy said the soldiers fired guns as they entered the community.

“We were half asleep and had to run for our lives,” he said. “They fired heavy artillery as they entered. They cooked and ate their meals before they started burning the houses around 11 a.m.

“They burned all houses in the village and granaries,” he said. “We’ve lost both food supplies and seeds for the coming season. It happened right before the time for sowing the seeds. Some people were not able to carry anything as they fled. All the villagers had to flee and left their belonging to be burned down.”

Villagers in the two communities told RFA that their motorcycles, tractors and other farming equipment were also burned.

A villager from Hnaw Kone who declined to be named said residents there could not return to their community and put out the fires because soldiers were still near the village watching the buildings as they burned.

“I watched the scene from in hiding near a nearby hill,” he said. “They started burning down the south side. I saw several columns of smokes, as large as houses.

“We could not go and put out the fires,” he added. “We felt totally helpless and despondent. Some girls fainted from distress. We all lost the paddies and all our property.”

About 3,500 civilians from nearby villages such as Zee Kanar and Chat Kone fled their homes when news of the arson reached them, locals said.

‘A pure act of terrorism’

Members of the Kanbalu township PDF said junta troops destroyed the villagers although they had not armed engagement with them in the areas.

“There were no military activities,” said one PDF member. “They were burning down the civilian properties as a tactic even though there had been no fighting.”

Junta troops have been stationed in Koe Taung Boe village for two months, and reinforcements and helicopters arrived there on June 3, the PDF member said.

Locals said there had been fighting between the PDF and the military troops on June 3. They also said that the regime cut of internet service in the township.

“The burning down of houses in villages is a pure act of terrorism,” he said. “They are terrorizing the people instead of protecting them. In some places, they burned down houses and murdered whoever was left in the village.”

Nay Zin Latt appealed to the Association of Southeast Asian Nations, the United Nations, and other members of the international community to condemn the junta and take measures to prosecute the military.

“Only then, they will stop their terrorist acts,” he said.

Research group Data for Myanmar said Monday that of the nearly 18,900 homes burned down by the military and its allied groups since the coup took place, about 3,840 have been in Sagaing region.