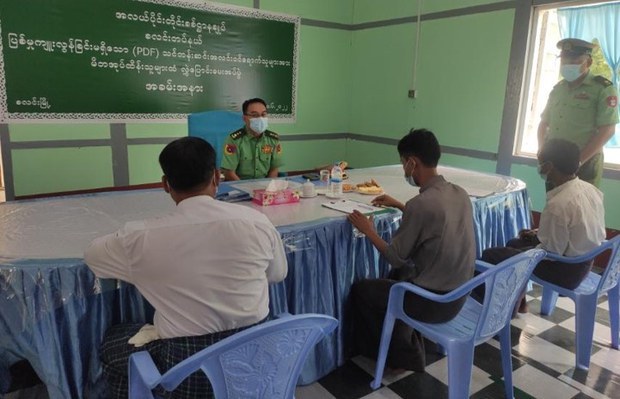 Myanmar’s junta has launched a campaign urging local members of the armed opposition to surrender, vowing to step down following elections planned for 2023, but prodemocracy fighters on Monday dismissed the move as a sign of desperation from a military regime barely clinging to power.

Beginning on June 12, state-run media outlets published an announcement by the junta calling on members of all armed groups — including the People’s Defense Force (PDF) paramilitary group it has labeled a terrorist organization — to lay down their weapons and return to civilian life.

Three days later, residents told RFA Burmese that they began hearing similar messages over loudspeakers from vehicles escorted by the military through several cities and townships.

“Their message was that they will be holding elections … and power will be handed over to the victorious [political] party, so they want the PDFs to give up their arms and surrender to the law,” said a resident of Myanmar’s second city Mandalay, speaking on condition of anonymity.

He said that people “ignored the announcements.”

Various armed resistance groups that have sworn loyalty to Myanmar’s shadow National Unity Government (NUG) told RFA that surrendering to the junta is not an option.

Sein Kyaw, the head of the Myaung Revolution Army in embattled Sagaing region’s Myaung township, said he and his fellow fighters must refrain from responding to the military convoys with calls of the same offer.

“There are people from their side who came to join [us]. … There are officers and soldiers who left the army. We PDFs are fighting against them as a people’s movement because we can’t tolerate their rule,” he said.

“We have no intention of surrendering to them. We will fight until the terrorist military dictatorship is uprooted and a federal democratic union established, leaving no dictators in our country.”

Sein Kyaw said the junta is incapable of rule, noting that his and several other townships in Sagaing lack operating schools, and suggesting that an election next year is unlikely as there is little coordination between the executive, judicial and legislative branches of the government.

A spokesman for the Sagaing-based Ranger Kalay Defense Force, who also declined to be named, told RFA that the military’s invitation is seen as a political ploy.

“I don’t think they have the power to conquer us at this time and they are making this move knowing that they cannot win,” he said. “No matter how much they implore us, we will not fall for this. We will do what is right until the very end.”

PDF groups also slammed the military’s call for their surrender while offering to hold peace talks with the country’s ethnic armed groups, which they said was a tactic intended to create a schism within the opposition.

Junta chief Snr. Gen. Min Aung Hlaing in April called on Myanmar’s ethnic armed groups to hold peace talks and end armed conflict with the military, but he refused to meet with the PDF, and observers say there is little chance that a resolution can be reached without all stakeholders taking part in negotiations.

Junta spokesman Maj. Gen. Zaw Min Tun has said that there will be no talks with the NUG, the Pyidaungsu Hluttaw Committee of Representatives, or the PDF because their objectives “are totally different from that of the ethnic armed groups” and “terrorist” in nature.

But Naing Htoo Aung, secretary of the NUG’s Ministry of Defense, said Monday that peace will not be possible in Myanmar without the participation of the NUG and the PDF.

“For many years, the military has used a strategy to divide the unity of the armed resistance, and it’s doing the same even now,” he said.

“There can be no internal peace without the NUG or PDF, without a genuine intention of leaving politics by the military, or without accountability for their misdeeds or a strong commitment to a federal democracy.”

Naing Htoo Aung said that, given the current political climate, elections are unlikely in 2023. If the junta pushes forward with a vote, he added, it will not reflect the will of the people.

A spokesman for the Saw Township People’s Administration in Magway region, which operates under the NUG government, said that even if the military holds an election next year, no one in his region will participate.

“I think an election is impossible, especially in our area. They can’t even operate their [administrative] machinery here and if they try to hold an election, there will be no election staff,” he said.

“A war of resistance is continuing nationwide. Some of the military camps have even been taken over. They might be able to hold sham elections in cities they control like Yangon, Mandalay and Naypyidaw … but a nationwide election is impossible.”

According to the junta, at least 66 PDF fighters have handed over their weapons since the call to surrender was issued earlier this month, although RFA was unable to independently verify the claim.

Political observer Than Soe Naing disputed the claim and suggested that the junta had issued the call to surrender as a tactic to end defections by members of the military and boost morale.

“So far, the number of soldiers and policemen who have defected is more than 20,000, so I think this is a political ploy to stop [the defections],” he said, adding that “no PDF fighter has willingly surrendered.”

He said that the opposition must defeat the military before an election is held next year if the people of Myanmar have any hope of reinstating democracy, as the junta will almost certainly install a puppet “civilian government” that will preserve its rule.

Since 2010, there have been three general elections in Myanmar.

The junta has yet to provide evidence of its claims and has violently suppressed nationwide protests calling for a return to civilian rule, killing 2,032 people and arresting 14,304 over the last 17 months, according to the Bangkok-based Assistance Association for Political Prisoners.