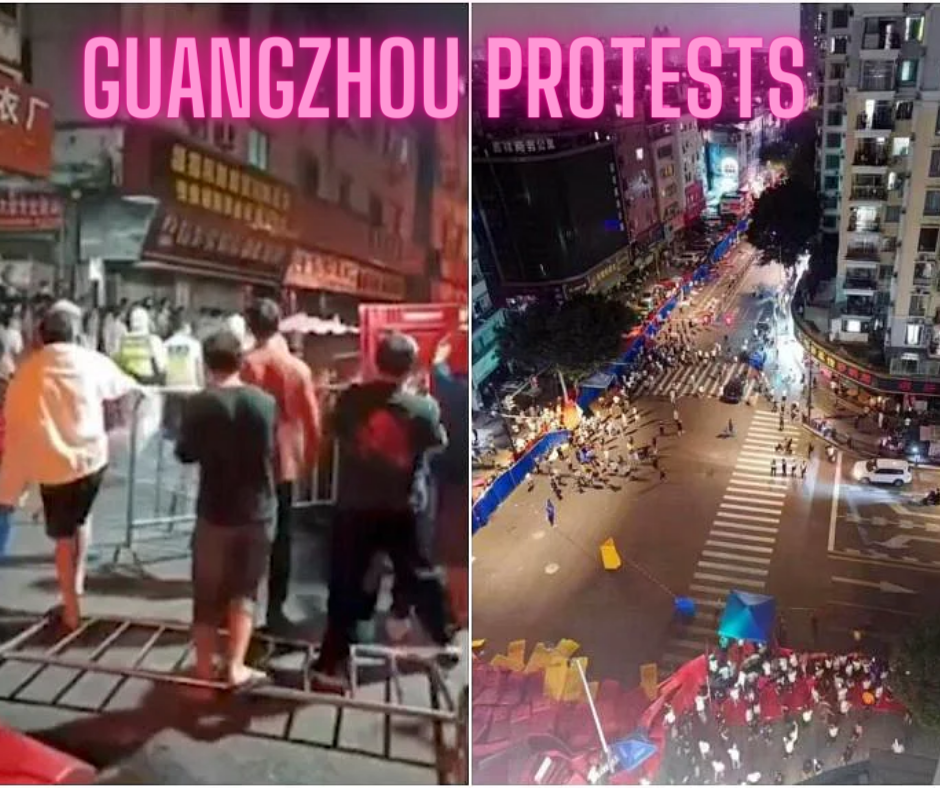 Situated on the Pearl River, Guangzhou in South East China has a maritime heritage stretching back over 2,000 years and its vast port is China’s main transport and trading hub. It was also one of the starting points of the old Silk Road, a trading route that stretched across Asia.

But presently, a severe livelihood crisis has been unfolding in Guangzhou. Due to a strict lockdown and imposition of the Zero Covid policy, the life of the residents has become miserable. Reeling from the livelihood crisis people started peaceful protests in the city. Due to restrictions not getting relaxed people in the city are starving and facing the burnt of lack of basic amenities. Therefore they started massive violent protests all around the city.

Crowds in Guangzhou have crashed through lockdown barriers and marched onto the streets in a rare outburst of public anger. Videos posted on social media showed people overturning a police vehicle in the Haizhu district late on Monday.

The authorities are trying to curb the protests with the use of force and outright violation of human rights. Around 15 people are reported missing after the Monday protests and several have been killed across the metropolis.

Furthermore, In Haizhu District, Guangzhou, where the protests occurred, the 74th Group Army’s chemical defense regiment has been called upon to handle the protesting people.

Guangzhou, home to nearly 19 million people, has been the center of Covid outbreaks in China, with the number of cases surging in recent days. Daily infections of Covid-19 in the city have topped 5,000 for the first time, leading to speculation that localized lockdowns could widen and the number of such violent protests and their intensity may escalate in the coming days.

Several posts on China’s social media platform Weibo blamed the protesters, who were mainly migrant workers from Hubei province, for the “rioting”, but many users noted that the arbitrary lockdowns of residences and the barring of migrant workers from returning home in the protracted Covid restrictions over almost three years were “driving people mad” and said some workers had killed themselves. Many Weibo users and overseas Chinese on social media are sharing panic posts and the number of suicides in the region is on the rise.

The Communist party’s mouthpiece People’s Daily on Tuesday reiterated that the “dynamic zero Covid” policy was to be “unswervingly implemented”, saying the “enhancement” announced last Friday was to fine-tune measures to fight against the pandemic, and not an indication of relaxation.