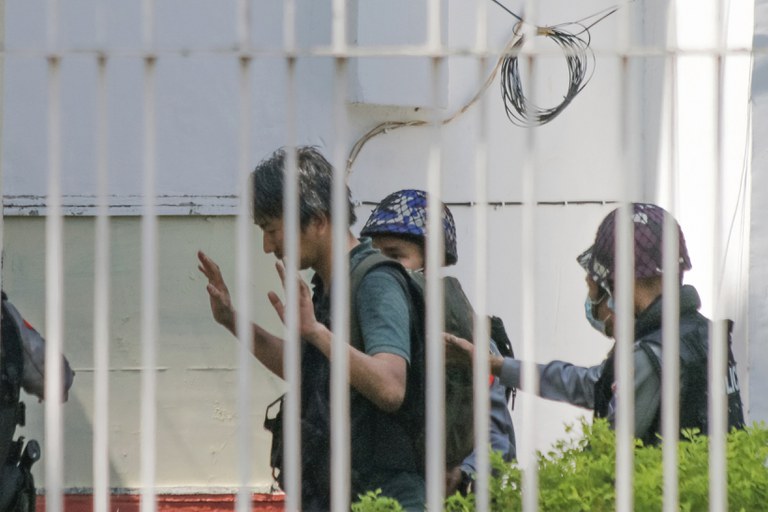 There was little to celebrate on World Press Freedom Day in Myanmar, where the junta has jailed 135 journalists since it seized power last year and reporters routinely face harassment, arrest and even death for doing their jobs, members of the media and watchdog groups said Tuesday.

Paris-based Reporters Without Borders (RSF) said that in the 15 months since its Feb. 1, 2021, coup, the junta had “obliterated” a decade of moderate press reforms in Myanmar, prompting it to name the country the world’s fifth worst abuser of the media freedom in its annual global index.

Speaking to RFA’s Myanmar Service on Tuesday, Han Zaw of the Detained Journalists’ Information said his group had documented the arrest of 135 journalists in Myanmar since the coup, adding that nearly half of them remain in detention.

“Eighty-three of them — 13 women and 70 men — have been released so far, some on amnesty, some after completing their sentences and some after serving a short-term detention,” he said.

“More than 80 journalists have been charged. There are currently 51 detained journalists — 13 women and 38 men.”

Myanmar is recognized by the New York-based Committee to Protect Journalists as the world’s worst jailer of journalists after China. Since the coup, authorities have arrested and sentenced outspoken members of the press on vaguely worded criminal charges that include “publishing false information” and “defamation,” as well as on charges of “terrorism.”

Freelance journalist Soe Yar Zar Tun was detained on Feb. 28, 2021, while covering anti-coup protests and is being held in Yangon’s Insein Prison facing a trial for violating the country’s Anti-Terrorism Law.

His brother, Zar Ni Tun, told RFA that the junta has no right to arrest members of the media for reporting the news.

“It’s completely hypocritical,” he said. “They have harassed and arrested and tortured people in the past and are still doing it.”

An editor from the Shwe Phi Myay News Agency, which is based in Shan state, said that in addition to the threat of arrest, journalists are now regularly in danger of losing their lives while doing their jobs.

“We know that once a person is arrested, it is very difficult for them to be released. At worst, they could be arrested, tortured or even killed,” he said, speaking on condition of anonymity for fear of reprisal.

“It’s not just the army in this area. There are many ethnic armed groups too. And so, we could get arrested and detained at any time and face a life-threatening situation.”

Veteran journalist Myint Kyaw said journalists in the country now find themselves in the worst situation they have faced since the military coup.

“We had the case of the first journalist to be killed while covering an armed conflict last January,” he said, referring website editor Pu Tuidim, who was abducted by junta troops while reporting on military clashes with armed ethnic soldiers in Chin state and later shot dead by his captors.

“Armed conflicts have escalated in cities as well as in rural areas. Journalists will be killed even more, as there are now death threats to journalists and their family members. And so there might be more bad news for us.”

According to RSF, Pu Tidim was the third journalist to be killed in less than a month in Myanmar. His murder followed the Dec. 25, 2021, death of Federal News Journal editor Sai Win Aung from gunfire during a clash between the military and anti-junta People’s Defense Force (PDF) paramilitaries in Kaiyn state. Freelance photographer Soe Naing became the first journalist to die at the junta’s hands under torture on Dec. 14, four days after being arrested while covering a protest in Yangon.

Journalists are also increasingly facing death threats for reporting news that portrays the junta in a bad light.

Last week, the pro-junta Thway Thauk, or “Blood Comrades,” militia called for the deaths of reporters and editors working for news outlets in Myanmar including The Irrawaddy, Mizzima, Democratic Voice of Burma (DVB) and The Irrawaddy Times — as well as their family members.

Observers say groups like the Thway Thauk have been emboldened by the military regime’s open disdain for the media, which was again demonstrated — days ahead of World Press Freedom Day — by junta deputy information minister, Maj. Gen. Zaw Min Tun, when he accused several news outlets of being “destructive elements” in Myanmar during an April 27 press conference in the capital Naypyidaw.

When asked by RFA for comment on the number of reporters currently detained or in prison, Zaw Min Tun responded that the junta had “not arrested anyone for working in the media.”

“They were arrested for inciting people and for having contacts with terrorist organizations,” he said.

“All media outlets, with the exception of those that have been declared illegal, are working freely here,” he added.

Global media watchdog RSF disagreed with that assessment Tuesday when it dropped Myanmar to 175th out of 180 countries in its 2022 World Press Freedom Index from 140th a year earlier. The group said that in the 15 months since seizing power, the junta had “obliterated” a decade’s worth of modest media reforms that began when the country’s last military regime disbanded in 2011.

The new ranking put Myanmar behind only North Korea, Eritrea, Iran and Turkmenistan as the worst place in the world to be a journalist.

RSF said that after seizing power from Aung San Suu Kyi’s democratically elected National League for Democracy (NLD) government on Feb. 1, 2021, the junta immediately banned a number of outspoken media outlets, leaving a handful to continue the work of informing their fellow citizens without offending the country’s military leadership.

The military regime enforces a strict regimen of censorship that prevents the press from reporting on its many human rights abuses, the group said, while leader Snr. Gen. Min Aung Hlaing “openly promotes a policy of terror towards journalists who do not toe the junta’s line.”

RSF noted that reporters are regularly arrested and sentenced to lengthy jail terms on criminal charges of “false information” or “defamation” if anyone disputes what they have written.

“What with the risks of being jailed, tortured or murdered, journalism is an extremely dangerous profession in Myanmar, which has become one of the world’s biggest jailer of journalists, second only to China,” the group said.

“The few accounts emerging from Myanmar’s jails indicate extremely harsh conditions and systemic use of torture,” it added.

Sein Win, executive editor of Mizzima, told RFA that journalists who try to uncover the truth in Myanmar are now being targeted.

“Dictators hate newspapers. True journalism always speaks the truth and that’s why these monsters do not want to see what journalists write or report,” he said.

“Troops have killed civilians and burned down houses in Chin and Karenni states and in Sagaing region, but they don’t want the news to come out. We were reporting the truth and they tried to cover up. They were afraid of it. Similarly, we report on their extrajudicial killings. It’s not just about them. We will report any wrongdoings, regardless of who committed them, in the search for truth.”