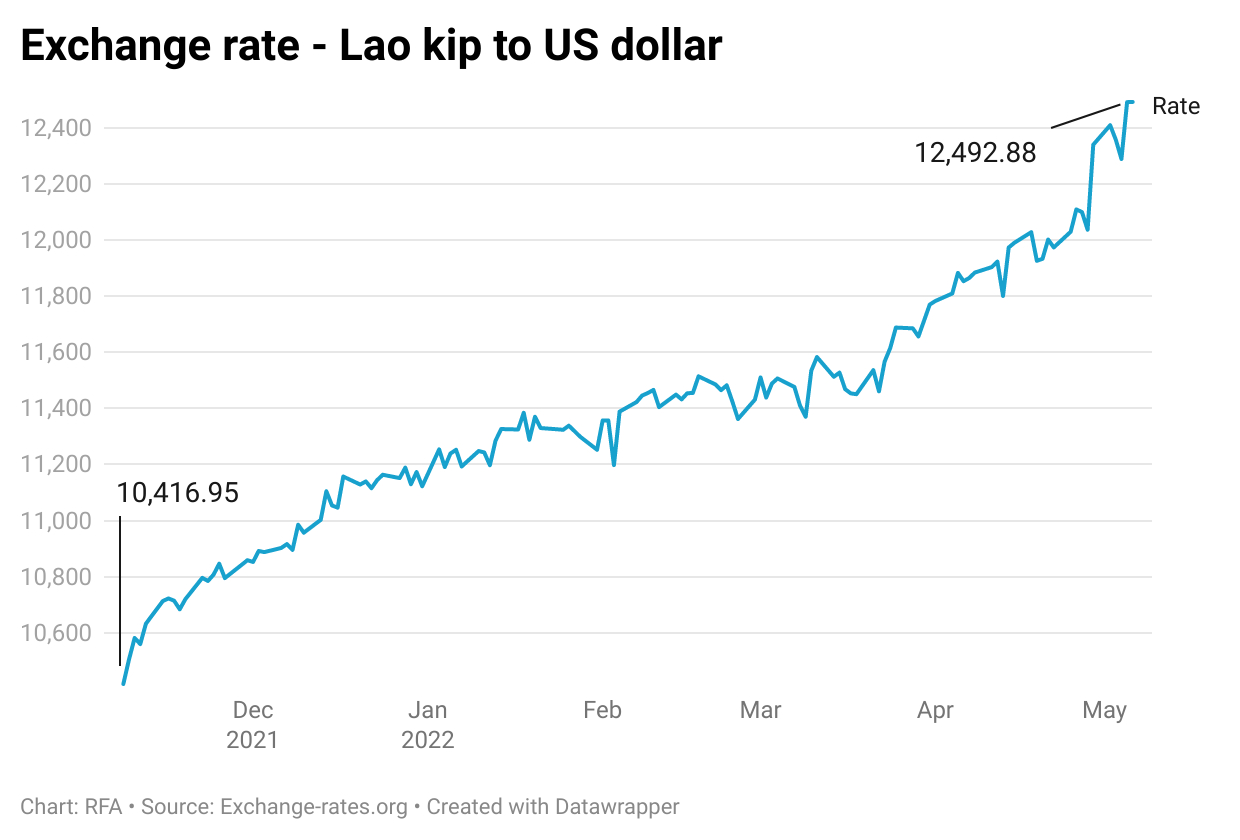 Laos’ central bank is blaming the depreciation of the country’s kip currency on money exchange businesses colluding to manipulate the market, but a lack of foreign reserves and an import-export imbalance appear to be the true causes, sources in the country told RFA.

According to Asia News Network, the kip depreciated by six percent against the U.S. dollar between Jan. 4 and April 8. At the same time, prices for imported household goods rose by 15-50 percent between April and January, the Vientiane Times reported.

A report from the Bank of Laos (BOL) acknowledged the decline, saying that from February this year, the kip entered a period in which it set records for decreases in valuation relative to the U.S. dollar and the Thai baht.

The central bank claimed that the currency was depreciating as a direct result of manipulation by illegal currency conversion shops, but sources who operate those businesses deny that they are to blame.

“We exchange money based on a free-market mechanism and the banks cannot control anything. … The depreciation of the Lao kip is because imports exceed exports. We import more and more,” a money changer and gold seller in the central province of Borikhamxay told RFA’s Lao Service.

“For example, there are many businesspeople who import all kinds of products ranging from fertilizer, seafood and snacks from Thailand and they need a large amount of baht or U.S. dollars to do this. They cannot get foreign currency at the banks, even though the banks set the exchange rate very low. They have to use our service to get foreign currency to continue their businesses,” the moneychanger said on condition of anonymity for security reasons.

The economic police from the Ministry of Public Security and officials from the BOL last month raided illegal money exchange shops as part of a broad crackdown, state media reported.

The intent was to stop the kip’s depreciation against the baht and the dollar. It would have worked if there was actual collusion between the moneychangers, rather than the simple result of supply and demand, the Borikhamxay moneychanger said.

Under normal circumstances, business owners would rather deal with the banks, but the banks have few reserves, forcing the owners to go to moneychangers, both legal and illegal.

“We cannot exchange our kip for baht or dollars at any bank. Even if we could, they would limit the amount of money we can have, and this wouldn’t meet our needs,” the moneychanger said.

Another moneychanger told RFA that depreciation feeds on itself. Fewer people want the kip as it falls further in value.

“Many people do not want to hold the kip and it is losing value very fast. Thus, many people are scrambling to get foreign currency in their pockets and wallets,” the second moneychanger said.

A trade expert in the southern province of Savannakhet, who asked not to be identified, said the fact that a trade deficit with Thailand has had a destabilizing effect on the kip.

In 2021, Laos recorded a trade surplus of about $1 billion according to the Chinese news outlet Xinhua, but this included a trade deficit of $813 million with Thailand, data from the Lao Trade Portal showed.

The most recent data from trade portal, from March, indicated a $100 million surplus, but with a $162 million deficit with Thailand.

“Even when people try to withdraw baht from their baht-denominated accounts, they can only get out 200,000 baht, or $6,000 per each account per day. For the big enterprise owners and business people, this policy makes everything difficult. The only thing they can do is to go to the exchange shops and accept their high exchange rates,” the expert said.

Another expert, who declined to be identified, told RFA that a crackdown on illegal moneychangers would do little to stabilize the kip.

“It would be far better to promote the exports to be stronger, and finally the kip will become strong itself under the free market,” he said.

He said Laos’ lack of foreign currency reserves were the main reason why the kip is weak against its trading partners’ currencies.

“Anyone who wishes to exchange kip for foreign currencies has to be a legal entity, for example, a company, enterprise, or organization declaring to make payment in foreign currencies to companies overseas. The exchange will also have limitation and not everyone will get the amount he or she wants,” the official told RFA, on condition of anonymity for privacy reasons.

According to the the Banque pour le Commerce Exterieur Lao Public, the official exchange rate for the kip was 12,666 kip per dollar on May 6. A Vientiane moneychanger told RFA that the free market rate on the same day was 14,050 kip per dollar.