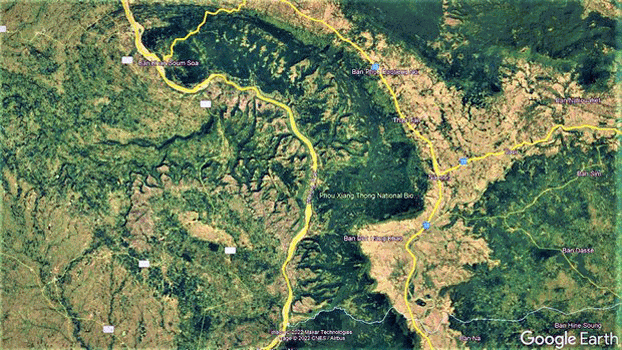 National parkland and protected forests have been shrinking slightly in southern Laos, not the work of the usual culprit — illegal loggers — but because residents are encroaching upon the land to grow cassava and other crops.

In the provinces of Sekong, one of the most impoverished areas of Laos, and neighboring Saravan, farmers desperate for land are turning up soil in national parks and forests despite laws and campaigns to protect the tracts in a country suffering rapid deforestation.

The surface areas of national parks and national protected forests in Sekong province’s Tha Teng district have diminished to 36.8% from more than 40% in 2016 partially due to encroachment by local residents, Viengsamone Chanbengseng, deputy director of the district’s Agriculture and Forestry Department, said at a meeting on deforestation on April 5.

The province’s Agriculture and Forestry Department has ordered them to stop occupying state land and stop cultivating land in protected forests after the November harvest.

An official at the Sekong Provincial Administration Office, who like other sources in this report requested anonymity for safety reasons or to be able to speak freely, told RFA on Monday that authorities have taken action against those caught encroaching upon protected land.

“We’ve reeducated them,” he said. “Most of them have been booked, many others have been disciplined, and some have been detained from three days to one week for grabbing state land.”

“Many villagers who are poor and landless grow cassava and coffee to make ends meet,” he said. “However, we, the authorities, insist they stop encroaching upon state land. They should grow crops on their own land for which they have title. The government doesn’t allow people to use state land.”

“These people don’t have land to farm,” he said. “They don’t have money to do anything. They grow cassava, so that they can have some income or some money to buy food.”

District officials are discussing a plan to provide villagers with capital, about 10 million kip (U.S. $826) per family, so they can invest in growing vegetables in their own gardens instead of on state land, he said.

“The Lao government wants to protect and preserve these forests for future generation,” said the Tha Teng district official. “The district authorities will be monitoring these people closely. If they encroach upon the state land again, they’ll be charged according to the law.”

“All land is occupied, so we’re going to where there is land,” he said. “A lot of land is occupied by Chinese and Vietnamese investors from here in Sekong province all the way to Saravan province. Why are the authorities cracking down only on us but not on the foreigners?”

Another farmer who lives in the district voiced a similar complaint: “We clear the forest to grow crops for our survival, not for commercial purposes. If the government wants to protect the forest, the government shouldn’t give land concessions to foreigners and shouldn’t limit land for its own people.”

In Saravan province, more than 100 families have grown cassava and mango on up to 600 hectares of land in Xebang Nouane National Protected Forest and Phou Xieng Thong National Projected Forest, a provincial National Park Service official told RFA in March.

“Just this year, 16 more families have occupied 10 more hectares in these two protected forests to grow cassava,” he said. “We’re beginning to seriously protect the forests because some villagers just disregard the law. Our [Lao People’s Revolutionary] Party and government want to protect the forests.”

Authorities had allowed farmers to grow crops on state land because they only occupied a small part of the protected forests, about 600 hectares of land, or about 2-3% of the total area, a Lakhonepheng district official in Saravan said.

“However, we, the provincial authorities, now want to stop it and to prevent people from expanding their cultivation,” he said.

A cassava grower from the Phoukasy village in Lakhonepheng said he is growing more of the tuber this year because of the higher prices.

“The problem is that I don’t have land,” he said. “I grow cassava in the protected forest and pay taxes to the district. We’re still allowed to grow cassava this year, but I don’t know about next year.”