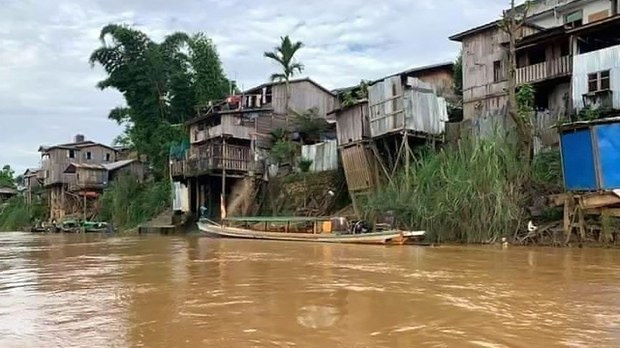 Four of the victims were killed on Tuesday when military jets flew the first of eight bombing runs over Se Zin village in the jade mining township of Hpakant, killing a child, said a resident, who spoke on condition of anonymity, citing security concerns.

“The last plane bombed at about 8:00 pm and then they fired at the village with machine guns and 60-mm heavy weapons,” he told RFA Burmese.

“The child died on the spot when his house was hit by the shelling. One woman had to have her leg amputated. And this morning, about 6:00 am, a family was shot at while trying to leave on a motorcycle. The husband and wife and their son [all died].”

The fifth victim, a man in his 40s, died on Monday when a shell fell on his house during heavy fighting near the village, the resident said.

He told RFA that there may have been additional casualties in the village, but said they hadn’t been confirmed.

The raid followed a Monday attack by a combined column of ethnic Kachin Independence Army (KIA) and anti-junta People’s Defense Force (PDF) paramilitaries that led to the capture of a military camp in Se Zin village and a pro-military Shanni National Army (SNA) camp located across the river in Shwepyi Myint village in Sagaing region’s Homalin township. The joint force also attacked the Se Zin Village Police Station on Tuesday.

RFA was unable to confirm the number of casualties in the clashes.

Another Se Zin resident, who also did not want to be named, said hundreds of homes in the village were destroyed in a fire set by junta troops.

“The fires were set by the military and the Shanni forces. They did it deliberately. They even set fire to houses that were left undestroyed [in the bombing].”

The fighting forced more than 3,000 residents of Se Zin to flee to the township’s Tar Ma Hkan village, about an hour away by motorcycle, where they are sheltering in schools, churches and monasteries, the resident said.

He said the refugees had fled with only the shirts on their backs and are in need of emergency food, clothing and medicine.

Other residents of Hpakant told RFA that some of the villagers remain trapped in Se Zin, where the military has set up a camp.

Speaking to RFA on Wednesday, Social Affairs Minister Win Ye Tun, who serves as the junta’s spokesperson in Kachin state, said the details of the situation in Se Zin village are “not yet known,” but said the military is “ready to help” those who have fled their homes.

“We have contingency plans for people who have to leave their homes because of fighting,” he said.

“I haven’t received any news yet about the fires or the clashes. I am the minister of social affairs, so reports about the fighting don’t come to me.”

Col. Naw Bu, the news and information officer for the ethnic Kachin Independence Organization (KIO), said it has become “routine” for the military to burn the homes of residents whenever there is a clash.

“Last night, there was an attack on the police station in Se Zin village and this is the usual response of the [junta],” he said.

“When there is a battle with their adversaries, whether it is near a village or their camp, or in the village, they won’t hesitate to kill people or torch houses.”

Naw Bu confirmed that there had been three consecutive days of heavy fighting in Se Zin village beginning on Monday and that the military had “launched aerial attacks all day” on Tuesday.

The raid on Se Zin comes less than a month after about a week of clashes beginning on July 16 between the military and the armed opposition in and around the village.

Hpakant is one of the most heavily militarized townships in Kachin state. The military cut off mobile internet access to the area on Aug. 20 last year.