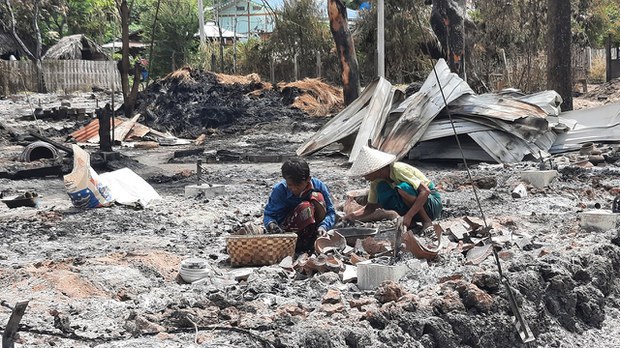 Attacks on civilians by Myanmar’s junta since its takeover in February 2021 constitute crimes against humanity and include the widespread sexual assault of women and the torture of children, a United Nations investigative unit said in an annual report Tuesday.

The Independent Investigative Mechanism for Myanmar (IIMM) said it had gathered evidence that sexual and gender-based crimes, including rape and other forms of sexual violence, and crimes against children have been perpetrated by members of the security forces and armed groups.

The IIMM said in its report that children in Myanmar have been tortured, conscripted and arbitrarily detained, including as proxies for their parents.

“Crimes against women and children are amongst the gravest international crimes, but they are also historically underreported and under-investigated,” Nicholas Koumjian, head of the IIMM, said in a statement issued by the U.N. Office of the High Commissioner of Human Rights in Bangkok that accompanied the release of the report.

“Our team has dedicated expertise to ensure targeted outreach and investigations so that these crimes can ultimately be prosecuted. Perpetrators of these crimes need to know that they cannot continue to act with impunity. We are collecting and preserving the evidence so that they will one day be held to account.”

Other vulnerable groups impacted by the crimes include members of the lesbian, gay, bisexual, transgender and intersex community in Myanmar, according to the IIMM.

The IIMM said it has collected more than 3 million pieces of information from almost 200 sources since starting operations three years ago, including interview statements, documents, videos, photographs, geospatial imagery and social media material.

Since the Feb. 1, 2021 coup, the IIMM said it had found “ample indications” that crimes have been committed in Myanmar “on a scale and in a manner that constitutes a widespread and systematic attack against a civilian population.”

The report found that the geographic scope of the potential crimes had expanded to include Chin, Kayin, and Kayah states, from Yangon, Naypyidaw, Bago, Mandalay, Magway and Sagaing regions a year earlier.

Additionally, the IIMM reported the number of instances of potential criminality had also increased from a year ago, including with the junta’s July 25 hanging of four democracy activists in the country’s first judicial executions in more than 30 years, which drew public and international condemnation.

Koumjian noted that the report came just two weeks ahead of the five-year commemoration of clearance operations that displaced nearly 1 million ethnic Rohingya from western Myanmar’s Rakhine state, most of whom remain in refugee camps in neighboring Bangladesh.

“While the Rohingya consistently express their desire for a safe and dignified return to Myanmar, this will be very difficult to achieve unless there is accountability for the atrocities committed against them, including through prosecutions of the individuals most responsible for those crimes,” he said.

The IIMM report came as residents and aid workers in Sagaing region told RFA Burmese that the military had razed around 700 houses from 30 villages in Tabayin township during its scorched earth offensive in the area between Jan. 1 and Aug. 8.

Around 4,000 people are in need of assistance as a result of the burnings, they said.

A resident of Tabayin, who spoke on condition of anonymity citing security concerns, said junta troops had continued to use arson attacks in their search for opposition forces in the township as recently as Monday, when they burned down Mu Kan village on the road between Ayadaw and Shwebo townships.

“The fires started [Monday] morning. Mu Kan is almost gone,” said the resident, who said the perpetrators belong to a military unit that had torched at least one other village in the township since January.

“Even though we called it a village, it’s like a big town. It has a hospital and clinics. Currently, the residents are on the run. We heard some people have also been arrested. The army has set up camp there.”

Residents told RFA there are more than 800 houses in Mu Kan and said this was the second time the military had set fire to the village, after burning more than 160 houses there in June.

A member of the Tapayin Township Brothers aid group said that the estimated 4,000 residents left homeless due to the arson attacks since the start of the year are enduring severe difficulties and “in need of urgent help.”

“Residents of 30 villages lost around 700 houses in the fires,” said the aid worker, who also declined to be named, citing a list the group had compiled of military arson attacks in the township.

“The situation in Tabayin township is getting worse lately. The villagers’ lives have been disrupted, especially those who lost their homes. They need a lot of help. Everyone in the region has been affected, so aid donations have dwindled significantly.”

The aid worker said that a few charity organizations and the shadow National Unity Government (NUG) have provided some assistance to the township, “but it is not enough.”

He said his organization had provided 346 houses in 17 villages with 30,000 kyats (U.S. $14) each, but the need for assistance remains substantial.

A resident of Tabayin’s Ma Ya Kan village, who asked to remain unnamed, said troops are “targeting the villages” and inhabitants are helpless to stop them.

Refugees are in need of food, clothing and shelter, he said, adding that the military had also destroyed the crops in their fields.

“The military arrests anyone they see in the villages, uses them as porters, and finally kills them. If they see residents wearing earrings on them, they tear them off. That’s how bad it is,” the Ma Ya Kan villager said.

“We have no place to live, so we have to cut down trees and build shelters from the rain. It’s happening all over the area and people don’t have the ability to help one another.”

A member of the anti-junta People’s Defense Force (PDF) paramilitary group in Tabayin said the armed opposition had been outgunned by the military and was forced to withdraw from the area.

“The military is carrying out the most brutal acts. They burn down whole villages. They come in with helicopters and fire from the air,” he said.

“The situation has become very bad and the people are suffering. There are no villages in the area that escape the arson attacks. The more they do this, the more militant the people become.”

Sources in Tabayin told RFA that the military used helicopters to attack the township twice in the past week alone, killing at least 10 civilians and PDF fighters.

According to research group Data For Myanmar, the military has razed nearly 19,000 homes between the coup and May 31 this year. Sagaing region was the hardest hit, with some 14,000 homes destroyed, the group said.

Security forces have killed at least 2,167 civilians and arrested more than 15,000 others since the coup, mostly during peaceful anti-junta protests, according to Bangkok-based NGO Assistance Association for Political Prisoners.