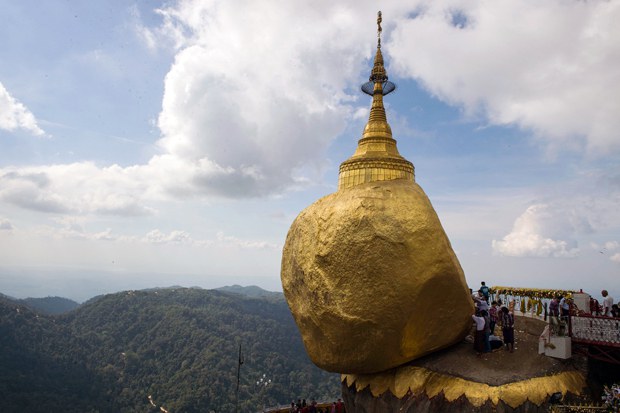 Local reporters from two media outlets in Myanmar went into hiding after the country’s ruling military junta threatened to sue the news agencies for reporting that regime troops killed three civilians and wounded 19 others near a Buddhist pagoda in Mon state last week.

BBC Burmese and The Irrawaddy online news journal reported that military soldiers allegedly fired random shots into crowds at the Kyaiktiyo Pagoda in Mon state, one of the most famous Buddhist sites in Myanmar, on Oct. 12.

The regime blamed the attack on an anti-junta People’s Defense Force (PDF) allied with the Karen National Liberation Army’s (KNLA) Brigade 1, the civilian National Unity Government (NUG) and its parliamentary wing. It said three were killed and 19 injured in the incident.

Irrawaddy and BBC reporters went into hiding after the junta issued a statement on  state-controlled Myanmar Radio and Television (MRTV) at 8 p.m. on Oct. 14, threatening to take action against their news outlets for “incorrectly” reporting on the incident.

“It is reported that The Irrawaddy and BBC Burmese news agencies, the blatant liars and the pessimist’s stooges, are going to be sued under the Electronic Communications Law, News Media Law, and the state defamation law for their accusation that the security forces randomly fired shots into crowds of pilgrims, a shameless act of violating media ethics,” the junta said in the broadcast.

A relative of a BBC Burmese reporter told RFA that all local BBC journalists, including the head of the news agency, are in hiding because of the junta’s threat.

“He [the reporter] won’t be able to stay here anymore since the junta started threatening to sue them all,” said the relative, who declined to be named for safety reasons. “He is afraid of being arrested, so he had to run away and hide.”

The reporter’s family members also went into hiding out of fear that the junta would hold them accountable, she said.

Three civilians were killed and more than 10 others were wounded when fighting broke out at a junta inspection station at the foothill of the Kyaiktiyo Pagoda on the morning of Oct. 12, local social workers and aid groups said.

Members of an unidentifiable armed group dressed in civilian clothes attacked the facility, which is part of the Myanmar military’s 44th Light Infantry Division in the Kin Mun Chaung village, they said.

“At this moment, they are all in the hospital, three dead bodies included,” said one aid worker who declined to be named for safety reasons. “We cannot go near them. I heard 13 were wounded.”

More than 100 bullets and five artillery shells were fired during the battle which lasted over an hour, a local told RFA. He also said that there were casualties on both sides.

After the fighting, pro-military channels on the Telegram instant messaging service accused the PDF and KNLA of being responsible for the attack.

RFA has not been able to independently identify or confirm which forces were involved in the incident and was unable to reach for comment the leaders of the Karen National Union (KNU), the KNLA’s political wing, in Kyaikto township.

In a public letter to senior officials of BBC Burmese, the junta’s Ministry of Information said their Oct. 12 report on the shootings intentionally attempted to defame the military by alleging that security forces shot civilians.

A senior official at BBC World News headquarters in London said the head office was “aware of the Burmese authorities’ concerns, and we have been in contact with them to discuss this.”

The Irrawaddy reported on Monday that an Oct. 14 statement from the KNU said the deaths were caused by random fire from junta forces responding to a PDF attack, citing testimony from a resident of the village where the fighting occurred.

Ye Ni, an editor at The Irrawaddy, said his news outlet’s coverage of the shooting was based on three sources.

He said that freedom of the press has been under attack since the February 2021 coup in which the military seized power from the democratically elected government.

“Threats by the junta against the news media have worsened, and [we’re] already at the brink of total collapse with their brutal persecution of reporters and unlawful abolishment of news agencies since the coup,” he said.

Ye Ni also questioned why the junta threatened to sue only The Irrawaddy and BBC Burmese when several news agencies also issued similar reports on the shooting.

Kyee Myint, a high court lawyer and legal expert who lives in Myanmar, said the rule of law had disappeared under the junta.

“The junta itself are the rebels who broke the law to seize power,” he said. “These rebels kill, sue and do anything else to stay in power. It’s no surprise. Since they are on the wrong side, they try to find fault with those who stand with the righteous people against injustice.”

Myint Kyaw, former secretary of the Myanmar Press Council, told RFA that it is getting more difficult for journalists in Myanmar to do their jobs.

“In this difficult time of collecting news, to sue a news agency only because what it covers is considered untruthful is the junta’s direct threat against the media,” he said.

He also said that because The Irrawaddy is no longer based inside Myanmar, the junta’s threat would not have a serious impact on the news organizations.

“As for BBC Burmese, this is the junta’s act to pressure the BBC to self-censor and adjust its editorial policy in favor of [the junta], Myint Kyaw said.

The junta has abolished 15 news agencies, four book publishers and two printing presses in the more than 20 months following the coup.