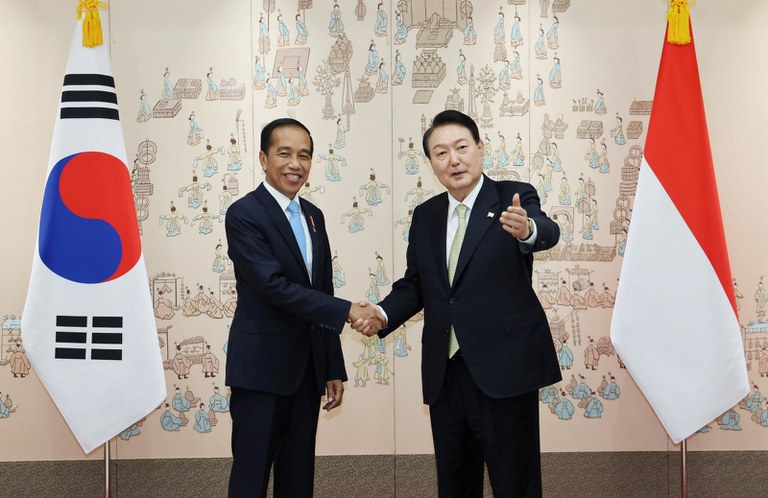 Joko “Jokowi” Widodo, the leader of G20 President Indonesia, undertook a carefully curated tour of Northeast Asia this week to ensure multilateral support for the group’s summit in November amid divisions over Russia’s war in Ukraine, analysts said.

“The leaders appreciated President Jokowi’s leadership in contributing to global peace,” she said.

Indonesia has often strived to balance its relations between China and its rival superpower, the United States. But in his role as this year’s holder of the revolving G20 presidency, Jokowi has had to step up his diplomatic game by playing a mediatory role to blunt the wedge that Russia’s invasion of Ukraine created in the group, observers said.

On one side, western countries in the Group of Twenty have condemned Russia for invading Ukraine. On the other, member-states including China, Indonesia and India, have refused to follow suit and still maintain ties with Moscow.

Still, there is no doubt Jokowi wants the G20 summit, scheduled for November in Bali, to be a success, analysts said.

“Indonesia wants to make sure the G20 summit is successful and attended by all members,” he said.

According to Agus Haryanto, an analyst at Jenderal Soedirman University in Purwokerto, Indonesia is concerned about the prospect of no agreement at the Bali summit.

“At the G20, Indonesia faces a major challenge on what the outcome of the G20 summit in November will be,” he said.

“With good relations with the three countries [China, Japan and South Korea], Indonesia is looking for support to smoothen things out and reduce tensions.”

Jokowi, whose term ends in 2024, wants to leave a legacy of being a peacemaker and reaffirm the country’s “independent and active” foreign policy, Agus said.

“During his first term, the president paid less attention to foreign affairs. Now in his second term, Jokowi has shown that domestic politics and foreign policy are equally important.”

Under Indonesia’s presidency, G20 meetings have been fraught, as most have occurred after the invasion of Ukraine in late February.

At the group’s foreign ministers’ meeting in Bali earlier in July, Russian Foreign Minister Sergey Lavrov walked out – at least once – during what he called the “frenzied castigation” of Moscow over Russia’s invasion of Ukraine.

Before that, top U.S. British, Canadian and Ukrainian financial diplomats walked out as a Russian official addressed a G20 meeting in Washington on April 20.

“The trip will also undoubtedly strengthen support for Indonesia’s G20 presidency, especially in preparation for the summit” in Bali, Foreign Minister Retno said on Thursday about her boss’s visits to Beijing, Tokyo and Seoul.

At a meeting between Jokowi and Japan’s top executives on Wednesday, 10 Japanese companies pledged a total of U.S. $5.2 billion in investments in the next few years, Indonesian officials said.

These include a pledge by carmaker Toyota Motor Corp to invest $1.8 billion to build its electric vehicles in Indonesia over the next five years.

In Seoul, South Korean companies expressed intentions to invest $6.72 billion, including in the electric vehicle battery, steel and gas sectors.

In addition, China said it wanted to increase crude palm-oil imports from Indonesia by 1 million tons, worth $1.5 billion.

While investment pledges are welcome, Ninasapti Triaswati, an economist at the University of Indonesia, cautioned about economic and defense deals with China in light of Beijing’s growing assertiveness in the South China Sea.

“China’s aggressive actions in the area are causing regional tensions. Likewise, regional tensions between China and Taiwan and Japan will have a negative impact on the ASEAN region and East Asia.”

The only way to maintain stability and peace is to respect international law, especially UNCLOS 1982,” she said, referring to the United Nations Convention on the Law of the Sea.

BenarNews is an RFA-affiliated news service.