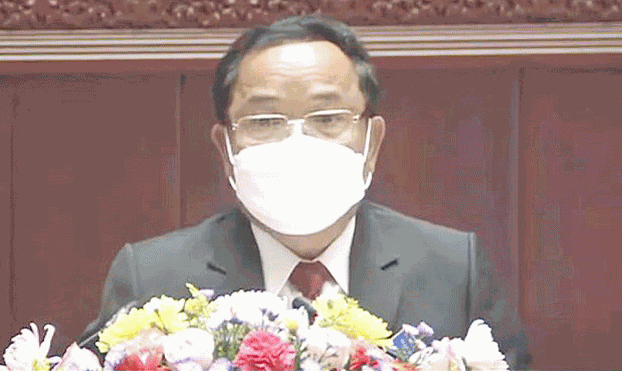 The Lao government has lost U.S. $767 million to corruption since 2016, with government development and investment projects such as road and bridge construction the leading source of the widespread graft, according to the country’s State Inspection Authority.

The SIA reported on April 11 that nearly 3,700 members of the communist Lao People’s Revolutionary Party had been disciplined, with 2,019 expelled and 154 people charged.

According to the inspection authority, 1,119 people, including 127 government employees, were involved in illegal logging and wood trade. In a country where illegal natural resource trade drives much of the graft, authorities seized 300,000 cubic meters of wood worth U.S. $127 million since 2016, according to the report.

The government has vowed to address corrupt practices that are pervasive in politics and every sector of the economy society, and put off potential foreign investors from pumping money into much-needed infrastructure and development in the landlocked nation of 7.5 million people.

However, despite the enactment of an anticorruption law that criminalizes the abuse of power, public sector fraud, embezzlement and bribery, Laos’ judiciary is weak and inefficient, and officials are rarely prosecuted.

“The difference, which is 2 million cubic meters, means that the Lao authorities are not transparent and are corrupt, and that there must be some kind of complicity between wood traders and Lao officials,” he said.

A small business owner in capital Vientiane said the inspection authority should name officials involved in abusing their power for private gain.

“Every year, they report the corruption and the losses in general,” he told RFA. “We don’t know who they are, names, position, where they work, on in which ministry, department or province they are.”

A corruption inspector told RFA that officials can name officials caught engaging the most egregious cases of graft.

“It depends on the case,” he said. “In serious cases of corruption, the agency can reveal names and positions, but because most of the cases are concealed, this will remain a state secret. It can’t be revealed.”

‘We can’t say anything’

State Inspection Authority President Khamphanh Phommathat has pledged to tackle the problem, saying that inspections are one of the most important tasks of the government and the Party.

Laos’ vice president, Bounthong Chitmany, has called on the inspection authority and officials in other sectors to expose corruption and punish those responsible.

“Our party considers corruption to be a major threat to the existence and development of our new regime,” he was quoted as saying by the Vientiane Times on April 11. “Not only that, it creates social injustice and affects the trust of people in the government and party.”

But a resident of Champassak province in southern Laos said he was not surprised about the country’s massive financial losses due to corruption.

“All nice and luxury cars on the road in this country belong the officials,” he said. “That’s not right, because their salary is only 3 million kip (U.S. $250) a month. How can they have that much money to buy those expensive cars for personal use? They still have a lot of money to spend on other things, too.

“We, the people, just watch and can’t say anything,” he added.

A volunteer teacher in Savannakhet province said that graft is so widespread in Laos that she and her colleagues have had to bribe officials to be hired for jobs with the government.

“My friend paid $1,500 last year to pass an exam and to be hired as permanent teacher,” said the women who declined to be named so she could speak freely. “He could do that because he knew and paid somebody up there.”

A young resident of Savannakhet province said Laotians have no way to report corruption without endangering their safety in the one-party country.

Lao inspectors acknowledged the problem of pervasive corruption and said they, too, are at a loss as to how to address it. One official who said he worked as an inspector in Vientiane for a decade said that he and his colleagues review the finances of government offices and departments but not those of individual officials who are powerful members of the party and the government.

“Nobody would dare inspect them,” he said.

‘That’s how it works’

An inspector in Luang Prabang province told RFA that the odds are stacked against the anti-graft campaign.

“When we receive an order from the central government to investigate individuals, most of the time the individuals will know this before we do, so that the person can get away with it,” he said. “That’s how it works.”

Berlin-based Transparency International 2021 Corruption Perceptions Index ranked Laos at 128 of 180 countries in the world. Laos received a score of 30 on a scale of 0-100, on which 0 means highly corrupt and 100 means very clean.

Government officials who are caught engaging in graft usually face little or no punishment, officials said. A low-ranking government worker in Saravan province said that an official in his department was disciplined in 2021 for embezzling money from a government development project.

“Then he was just transferred to another position, not even fined or charged with any crime,” he said. “This practice reflects how effective the laws are in Laos.”

Individuals who embezzle more than U.S. $200,000 are subject to paying a fine and being jailed for life. But a Vientiane resident agreed that corrupt officials are not punished enough.

“If they’re caught embezzling money, they should be punished or at least fired and pay the money back,” he said.

But an inspector at the Ministry of Public Works and Transport said investigators are starting to crack down on corruption.

“We’re getting stricter right now,” he said. “Those who commit financial crimes will be strictly punished. All those road and bridge construction projects are sold to private companies. There is no more room for corruption.”