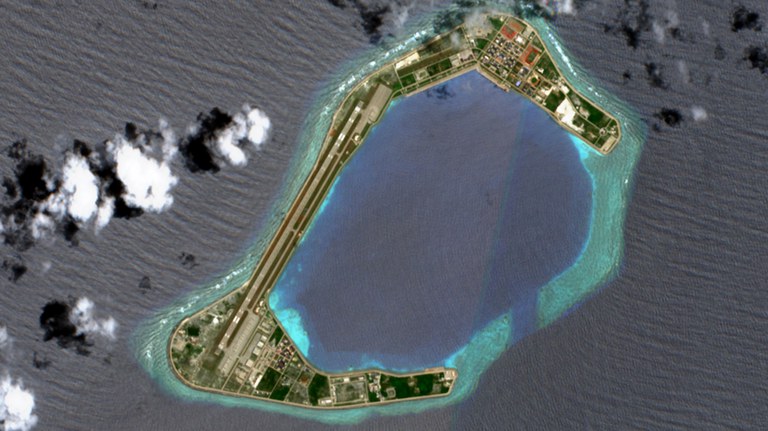 Recent satellite imagery shows that China is continuing to actively develop its facilities on the disputed Subi Reef in the South China Sea, two months after a top U.S. commander said Beijing had “fully militarized” it.

Simularity Inc., a U.S. geospatial intelligence company, said that an analysis of satellite imagery from May 5 has revealed new structures and seven active construction sites on Subi, the coral reef occupied by China since 1988 but also claimed by the Philippines, Taiwan and Vietnam.

In March, the U.S. Indo-Pacific commander Adm. John C. Aquilino said that the construction of missile arsenals, aircraft hangars, radar systems and other military facilities at Subi Reef, as well as Mischief Reef and Fiery Cross “appeared to have been completed.”

Subi is one of several major bases that China built during a massive dredging and artificial island-building campaign in the Spratlys that began in 2013, creating 3,200 acres of new land and giving it a new strategic foothold in the South China Sea.

In its natural state, Subi is what is known as a low-tide elevation and an international tribunal in 2016 ruled that as it is submerged at high tide, Subi is not an island but considered “sea bed” and the People’s Republic of China’s (PRC’s) constructions on the reef are illegal.  China rejected the ruling.

Until now, China has reclaimed 976 acres on Subi, according to the Asia Maritime Initiative (AMTI) at the Washington-based Center for Strategic and International Studies.

The seven active construction sites are located in the northern and southern parts of the reef, with visible presence of trucks, construction equipment and material, Simularity said.

“A significant amount of sand” is seen at the sites, indicating new roads and structures are being built. At one site in the south, there are new walls and parking lots, Simularity said, without drawing further conclusions about the possible function of the sites under construction.

Subi (Zamora in the Philippines) Reef lies just 12 nautical miles from the Philippine-administered Thitu Island, which is the second largest natural feature in the Spratlys after Taiping (Itu Aba) Island, occupied by Taiwan.

China has developed it into a military base that can accommodate a garrison of 200 troops and a helipad, according to Philippine officials.

AMTI says there are a number of important structures on Subi, including a large lighthouse, five hangers that each can accommodate 20 combat aircraft, and an over 3,000-meter airstrip, completed in early 2016.

“They threaten all nations who operate in the vicinity and all the international sea and airspace,” he added.

China’s Civil Aviation Authority said it successfully tested a civilian flight on Subi in July 2016, using a Boeing 737 airplane, “further enhancing its capability to provide public services as a responsible player in the region.”

The Philippines and Vietnam both protested against the test flight which is not known to have become regularly scheduled.