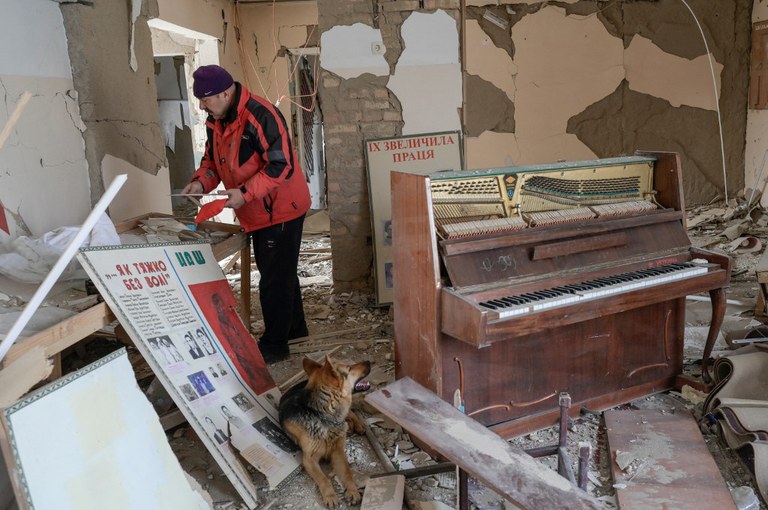 Russian and Chinese disinformation about Ukraine, which is ideologically linked to ruling Chinese Communist Party (CCP) propaganda on Taiwan, is breaking through into online discourse on the democratic island, a fact-checking organization based there has said.

According to Taiwan’s Information Operations Research Group (IORG), which seeks to “counter authoritarian expansion with scientific research and grassroots organization,” tens of millions of social media posts, articles, videos and comments have deluged the Chinese-language internet since Russian troops began massing on the Ukrainian border in November 2021.

Among the CCP narratives, which are often straight echoes of the Kremlin’s own, are the idea that the relationship between Russia and Ukraine is similar to that of an ex-husband and wife, that the war was made inevitable by NATO’s eastward expansions, and that the neo-Nazi Azov Battalion is responsible both for mass murder in Ukraine, and for violently supporting Hong Kong independence.

Far-right Ukrainians were spotted at the Hong Kong protest movement of 2019, which also won vocal support from ultra-conservative politicians in the U.S., and were outed on social media by protesters at the time, the majority of whom didn’t welcome their presence in Hong Kong.

Other Chinese-language, pro-Russian takes on the Russian invasion include the idea that Ukraine is to Russia what Texas is to the United States, that Ukraine has engaged in a “de-Russification” program that disregards the rights of Russians in the country, and the slogan “Ukraine today, Taiwan tomorrow.”

These narratives have been recurring in both simplified Chinese from China and traditional Chinese from Taiwan and Hong Kong across Facebook, LINE and Weibo, and represent a large-scale information offensive, IORG codirector Yu Chih-hao told The Reporter.

One of the sources for the neo-Nazi claim was traced by IORG and RFA’s partner, The Reporter, to a Nov. 13 post in simplified Chinese posted to the Chinese International Facebook page. The post cited state media Russia Today (RT). A similar article appeared on the Russian news agency Sputnik, which has 11.62 million followers on China’s Weibo platform.

By Nov. 15, 2021, the nationalist Global Times was accusing the Ukrainian government of “flirting” with nationalist militants and fascist groups, with the narrative spreading like wildfire through content farms and Facebook pages in the month that followed.

In Hong Kong, the CCP-backed Wen Wei Po took up the theme, reporting: “Ukrainian neo-Nazis have extended their black hand to other countries and regions, including participating in the [2019 protest movement] in Hong Kong two years ago,” claiming that they were working with “Hong Kong separatists.”

Calls for independence for Hong Kong surfaced relatively late during the protest movement, which began as a mass movement opposing extradition to mainland China, and broadened to include calls for fully democratic elections and official accountability.

They were later outlawed under a draconian national security law imposed on Hong Kong by the CCP from July 1, 2020.

There were also parallels between Russia’s claim on Ukraine, using neo-fascism as an excuse, and the CCP’s threat of military invasion of Taiwan, given the Taiwan authorities’ vocal support for the Hong Kong protests movement.

According to You, this oversimplification and and exaggeration of the power and influence of the Azov battalion is deliberate, because it is preparing the ground for a future invasion of Taiwan, which has never been ruled by the CCP, nor formed part of the People’s Republic of China.

The saying “Ukraine today, Taiwan tomorrow,” is also all over the Taiwanese internet, and is designed to give an air of inevitability both to Russia’s invasion of Ukraine, and to a putative Chinese invasion of Taiwan, IORG said.

She cited a Sputnik News Agency report on Feb. 26 claiming that Ukrainian president Volodymyr Zelenskyy had fled Kyiv, which appeared on a number of mainstream Taiwanese media sites. While the article was based on “unconfirmed reports,” the headlines about Zelenskyy’s “escape” from Kyiv gave the impression of legitimacy.

Chen said Taiwanese media are particularly vulnerable to manipulation on Ukraine, as they lack their own sources of information on the ground, and rely too easily on Russian media for news of the war.

“This is a phenomenon that hasn’t happened before,” Lu told RFA. “Not many people are aware of the extent to which Russian media content is being reused and disseminated in Chinese.”

“Everyone thinks it’s only there to improve the performance targets of Russian officials.”

A survey of Chinese reports on Ukraine published during the past four month, carried out by IORG and The Reporter, found at least 400 articles that directly cited Russian state media as the main source of information.

The majority covered Zelenskyy’s now-debunked “flight from Kyiv,” the erroneous claim that Russia now controls Ukrainian airspace, and disinformation that the U.S. secretly helped Ukraine develop biochemical weapons at a network of laboratories.

The ready availability of such content in Chinese makes it that much easier for these items of fake news to penetrate websites in democratic Taiwan, You said.

Senior journalists in Taiwan who spoke anonymously to The Reporter and RFA said they are typically expected to write up international news reports under extreme time pressure, and rely on quoting agency reports while attributing them to their source, with no time or resources to perform an independent fact-check on each one.

According to the Taiwan Journalists’ Association, only a handful of the island’s mainstream news media applied for international press accreditation to cover the war from Eastern Europe. Most other outlets rely purely on compiling copy from various wire services to provide their readers with news of the war.

“What Taiwan needs to do is to learn from the Ukrainians how to strengthen their ability to interpret information through daily reading and dialogue, and practise pushing back against disinformation operations,” You said.

“This is very important, if we are to strengthen democracy’s defenses,” he said.

Based on a collaborative report by RFA’s Mandarin Service and The Reporter, a Taiwan-based investigative magazine. Translated and edited by Luisetta Mudie.