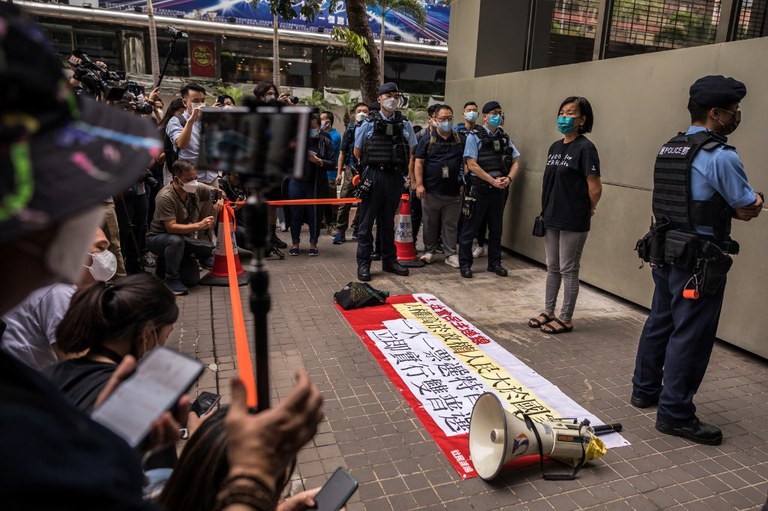 Hong Kong’s one-horse leadership poll, which selected former security chief John Lee — the only candidate — for the city’s top job at the weekend, has wiped out any distinction between the city and the rest of mainland China, commentators said on Monday.

Lee, a former police officer who oversaw a violent crackdown on the 2019 protest movement, was “elected” by a Beijing-backed committee under new rules imposed on the city to ensure that only those loyal to the ruling Chinese Communist Party (CCP) can hold public office.

Ninety-nine percent of the 1,500-strong committee voted for Lee, who was the only candidate on the slate.

Lee, who takes office on July 1, the anniversary of the 1997 handover to China, vowed to “start a new chapter” in Hong Kong, which has seen waves of mass, popular protest over the erosion of the city’s promised freedoms in recent years.

He also denied that anyone had been detained or imprisoned for “speech crimes” under a draconian national security law imposed on the city by Beijing from July 1, 2020, saying that people were only taken to court because of their “actions.”

“[The] chief executive election was very important, because … it meant we were able to fully implement a political system in which Hong Kong is ruled by patriots,” Lam told reporters.

She thanked Beijing for restoring “stability” in Hong Kong with the national security law and the electoral changes.

“National security education” — a CCP-style propaganda drive targeting all age-groups from kindergarten to university — is also mandatory under the law, while student unions and other civil society groups have disbanded, with some of their leaders arrested in recent months.

In a joint statement, the foreign ministers of Canada, France, Germany, Italy, Japan, the U.K. and the U.S. criticized Lee’s “election” as “part of a continued assault on political pluralism and fundamental freedoms.”

“The current nomination process and resulting appointment … further erode the ability of Hongkongers to be legitimately represented. We are deeply concerned about this steady erosion of political and civil rights and Hong Kong’s autonomy,” they said.

Chinese foreign ministry spokesman Zhao Lijian said Beijing believed that Lee would lead a new administration and the people of Hong Kong to “a new prospect of good governance.”

A Taiwan-based Hongkonger who have only the surname Wong said the city had entered a “new era,” referencing the political ideology of CCP leader Xi Jinping.

“What is this era? It is one of rule by a military regime and of white terror of a kind that Taiwan has seen before; an era of dictatorship,” Wong said.

“I don’t think there is any more room for breakthroughs or changes to the way things are developing for civil society in Hong Kong, or to the system,” he said. “There’s no going back from this.”

A former 2019 protester who gave only the nickname Joker said he had also left his home city for democratic Taiwan, and has no prospect of going back there any time soon.

“It makes no difference to me whether John Lee comes to power or not; the government has had no respect for us since [the protests],” he said. “For me, Hong Kong is no longer the Hong Kong I once knew. It is no longer our home.”

“Things are worse in Hong Kong than I had previously thought they would get,” Lam told RFA. “It’s just like … [the rest of China] … The main thing now is obedience; obeying orders from central government,”

‘A tragedy for Hong Kong’

“John Lee is a security chief, not a decision-maker; he’s the white glove [concealing the iron fist] of the CCP,” Sang told RFA. “It’s clear from his record that he has a tough style, and may be even more vicious than either Carrie Lam or [her predecessor] Leung Chun-ying.”

“[For example,] I understand that prisons in Hong Kong are becoming more and more indistinguishable from prisons in China,” he said. “I think CCP will seize even more control of Hong Kong in future, with religion, families and communities deeply impacted … no different from Xinjiang or the Soviet Union.”

“This is a tragedy for Hong Kong.”

He said it was a move in the wrong direction.

“The best thing would be for Beijing to govern Hong Kong as little as possible, and let the people of Hong Kong decide what the [differences between Hong Kong and China are],” Huang said.

“The more Hongkongers have a right to speak up, the better.”

Fan Shih-ping, professor at the Institute of Politics at Taiwan Normal University, said any distinction between Hong Kong and mainland China has been eroded with Lee’s accession to power.

“Hong Kong has become a police state, dominated by the police, with a chief executive who comes from the police,” Fan said.

“When we in Taiwan see this unfolding, we see a Hong Kong that is totally different from the way it was before.”

He said Taiwan should beware of accepting Beijing’s offer to rule the democratic island under the “one country, two systems” model promised to Hong Kong.