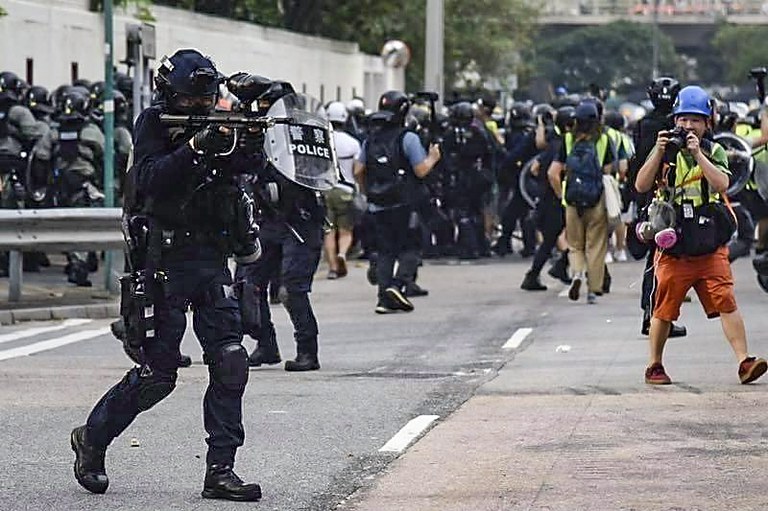 Former members of Hong Kong’s once-free press corps are launching their own media outlets aimed at covering the city from overseas, from a pro-democracy point of view.

While the implementation of a draconian national security law since July 1, 2020 has ushered in a crackdown on pro-democracy media organizations, activists and politicians in Hong Kong, many journalists have already joined the steady stream of people leaving their home to seek a less restricted life elsewhere.

The Chaser, a Chinese-language news site, was set up “to preserve press freedom, defend democracy and human rights, and serve Hong Kong people around the world,” according to its Patreon page.

It cited the recent forcible closure of Jimmy Lai’s Next Digital media empire, including the pro-democracy Apple Daily newspaper, as well as the closure of Stand News and Citizen News, and the “rectification” of iCable news and government broadcaster RTHK to bring them closer to the ruling Chinese Communist Party (CCP)’s official line.

“Any independent media that remain are struggling for support, and are in danger of being banned at any time,” The Chaser said. “Our news platform hopes to provide readers with the most authentic, in-depth reports without red lines and official censorship by recruiting independent and quality professional journalists, and strive to maintain the position of press freedom of the Hong Kong media.”

The outlet aims to become the biggest source of news for Hongkongers in exile, while still serving those who remain in the city, it said.

Since its inception six weeks ago, The Chaser has filed daily news on Hong Kong, Taiwanese and international affairs, posted exclusive investigative reports and kept Hongkongers overseas connected with each other.

Another media platform — Commons — has been started by Hongkongers based in democratic Taiwan, although its editorial team were reluctant to go on the record due to security concerns for those they left behind in Hong Kong.

“The Hongkongers in Hong Kong, including some who are interested in migrating overseas, are very curious about the lives of Hongkongers overseas, and want to know everything about them,” Commons’ editor-in-chief told RFA, giving only the pseudonym A Muk.

Commons is focusing on in-depth interviews, and all of its content is free to read online, unlike The Chaser, which requires a subscription through Patreon.

“The environment in Hong Kong is no longer conducive to journalism, so I wondered if there could be opportunities and a more suitable environment overseas, to set up a media outlet for Hongkongers overseas,” he said.

Commons currently employs around 8-10 people, as well as stringers in Canada and the U.K., to keep track of the newly arrived Hong Kong communities there.

“Now that Stand News and Citizen News are gone, there is an even bigger gap, and an even greater need among Hongkongers,” A Muk said. “We thought we should try to use our environment and platform to report news from overseas, to see if we can fill that gap, to meet the demand among Hongkongers for news.”

New media platforms like Commons and The Chaser could also provide limited opportunities for Hong Kong’s growing community of former journalists in diaspora.

When Stand News folded on Dec. 29, 2021 under the threat of investigation by national security police, reporter Lam Yin-bong was the one who turned off all of the lights in the office for the last time.

Lam said he had been hugely reluctant to leave the building.

“There was a sense that it was all over, and, even though we were expecting it, that night, we really didn’t want to leave,” Lam said. “We knew that from that day onwards, nothing would be the same.”

“I still have nostalgia for those times, but I also know that nostalgia is pretty useless, and not worth clinging to,” said Lam, whose 10-year career as a journalist ended overnight.

A way of life’

He described being deprived of his professional identity and way of life, something he had enjoyed for 10 years.

“It wasn’t just a job, but a way of life, but then suddenly that way of life is gone completely. It’s a horrible feeling,” Lam said.

What Lam finds harder than losing his own job is a more generalized silence emanating from Hong Kong’s once-crowded media landscape.

He was stunned to find that the boundaries with the rest of mainland China were also fading rapidly, citing the building of a new bridge with neighboring Shenzhen and a mainland Chinese-style makeshift hospital staffed with mainland Chinese staff under emergency regulations in March.

“This was a huge development. Suddenly there’s this bridge between Hong Kong and Shenzhen, and extraterritorial powers not regulated by Hong Kong laws,” Lam said. “Why did nobody care about this story?”

“I thought maybe the world needs this information, and that maybe I could still do my bit … to remind people what is going on in Hong Kong,” he said.

Lam’s “bit” took the form of his blog “ReNews,” which describes itself as a “one-person news platform founded by an unemployed journalist.”

He hopes at least to use it to chronicle the death of the Hong Kong he once knew.

“People often say that Hong Kong is dead, or dying,” Lam said. “So people living here should know how it died, and what the process entailed.”

“Even if you can’t change it, at least you know,” said Lam, who offers all of his content free of charge, although paid subscriptions are available.

Lam has taken the risky decision to remain in Hong Kong while he chronicles the process, with his Facebook page garnering more than 26,000 followers in the first few days.

Hong Kong recently plummeted from 80th to 148th in the 2022 Reporters Without Border (RSF) press freedom index, with the closures of Apple Daily and Stand News cited as one of the main factors.

More than 800 Hong Kong journalists lost their jobs at the two outlets, leaving most forced to look for work outside the industry, many of them far from Hong Kong.

“They were all coming out [jobhunting] all at once, and there weren’t enough vacancies for them,” former Stand deputy assignment editor Ronson Chan, who currently chairs the Hong Kong Journalists’ Association (HKJA), told RFA.

Chan, who has recently started working for another new outlet, Channel C HK, founded by a former Apple Daily journalist, said he was one of the lucky few who had managed to find jobs in the industry.

“Some of them have started online clothing stores, selling clothes online; some are still getting some video or photography work, but not news-related, and some are working as copywriters [in marketing and advertising],” Chan said.

But those to emigrate find the language barrier and lack of familiarity with home turf major barriers when seeking similar work overseas.

Research by the HKJA has found former members of the press corps turning to taxi-driving, McDonalds, PR and restaurant work to make ends meet.