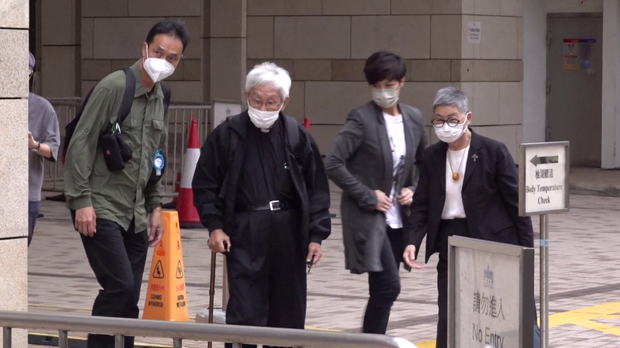 Tai, 57, was handed the sentence after pleading guilty to illegally incurring H.K.$253,000 in election expenses by placing six newspaper ads to promote scheme, which aimed to win a majority for pro-democracy parties in LegCo.

District Court judge Anthony Kwok said the sentence had been reduced by five months due to the guilty plea and by two months because of delays in prosecuting the case.

Kwok said the strategic voting scheme had affected the “fairness” of the election, although it was later postponed by the government and held under rules preventing any opposition candidates from standing at all.

Tai and 26 other activists and former pro-democracy lawmakers are also awaiting trial under the national security law for subversion for their role in an unofficial democratic primary held in the run-up to the main poll.

Onlookers shouted out “Hang in there!” and “Jesus loves you!” from the public gallery after the sentence was read out.

The sentencing came as retired Catholic bishop and Cardinal Joseph Zen and five co-defendants pleaded not guilty to ‘collusion with foreign forces’ in connection with their trusteeship of the 612 Humanitarian Relief Fund, which offered financial, legal and psychological help to people arrested during the 2019 protest movement.

At the hearing attended by the German consul Johannes Harms and other foreign diplomats, the six also pleaded not guilty to another charge of “failure to apply for registration or exemption from registration of a society within the specified time limit.”

Their trial has been scheduled for Sept. 19, and all defendants barring Cyd Ho were released on bail after the national security police confiscated their passports.

The prosecution said it would call 17 witnesses, and present 10 boxes of documents and eight hours of video clips as evidence.

Onlookers called out in support of Zen and the others, calling him Peace Cardinal, and exhorting them to “take care,” and offering Christian blessings.

Meanwhile, the Law Society said it would investigate the defense team for alleged “professional misconduct,” prompting fears that the pro-China body will target defense attorneys in a similar manner to official lawyers’ associations in mainland China.

The Catholic Diocese of Hong Kong said Tuesday said it will no longer hold masses for those who died in the 1989 Tiananmen massacre, citing fears of prosecution under the national security law.

Masses were held at seven churches last year to the June 4, 1989 anniversary.