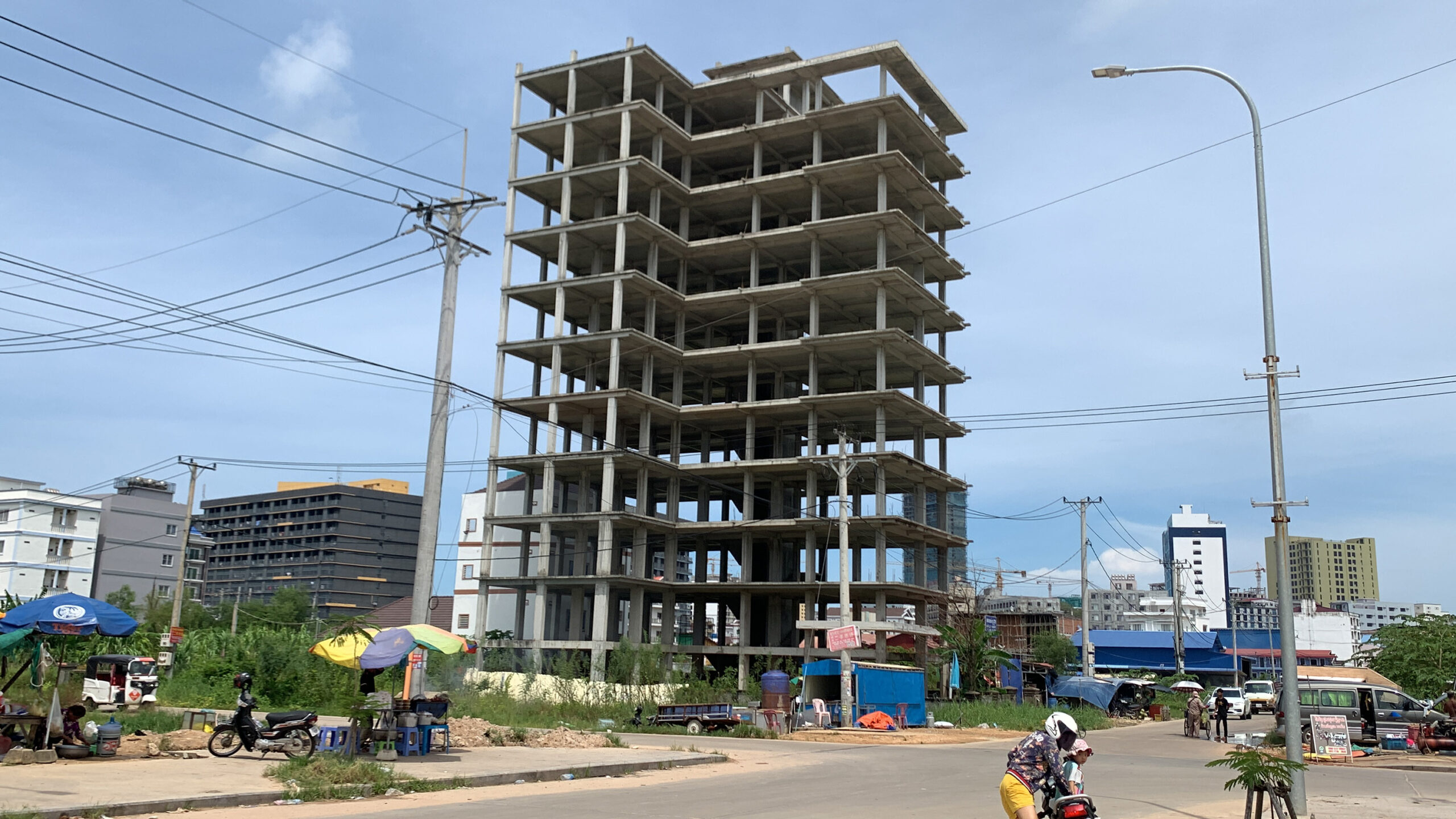 A mass departure of Chinese investors from Cambodia’s Sihanoukville during the coronavirus pandemic left behind more than 1,000 unfinished buildings and an economic headache for the once booming coastal city.

Sihanoukville was a popular international and domestic tourist destination in the midst of a building boom as investors in new casinos hoped to cash in on the gambling industry.

But once it became clear that tourism was going to be crippled by pandemic restrictions, many investors decided to cut their losses, and the so-called “ghost buildings” remain unfinished, diminishing the beauty of the seaside resort town. Authorities say the problem could lead to more economic decline and even fewer tourists.

Mean Samnang, who keeps a shop near one of the city’s Chinese-owned casinos, told RFA’s Khmer Service that the ghost buildings are driving tourists away.

“If the authorities would have taken measures to finish up those large-scale construction projects sooner, it would have been better for the people who have to make money for a living,” he said.

He said that two years ago business in the shop was much better, and many of his customers were Cambodians who were employed by the casino.

Mean Samnang said that he hopes authorities will start restoration on the buildings by opening up a flow of foreign investment, as had been the case in 2019. In the meantime the ghost buildings have been used as hideouts by criminals and gangsters, he said.

Long Dimanche, the deputy governor of Sihanoukville province, predicted that Chinese investors may return soon, but he did not deny that the empty buildings could negatively affect the city’s economy long term.

“We have not discussed everything yet,” Long Dimanche said. “The other day, we encouraged the Provincial Chamber of Commerce to organize a forum for consultation over the private sector to discuss the issue between landowners as well as foreign investors, who came to invest in construction. In the discussion, there was  participation of experts who specialize in solving the stalemate in the real estate sector.”

The construction slowdown is a direct result of the Cambodian government’s efforts to ban illegal online gambling, as well as the pandemic, Sreng Vanly, the Sihanoukville coordinator for the Cambodian League for the Promotion and Defense of Human Rights, told RFA.

The two events forced Chinese investors to return to China, abandoning their buildings and hurting the economy and livelihoods of local residents, especially the owners of the land underneath the buildings. Many of the owners borrowed money from the bank to buy the land, thinking that the rent revenue from Chinese builders was a safe bet. But now they aren’t collecting anything.

Only a few small buildings have resumed construction, Cheap Sotheary of the Cambodian Human Rights and Development Association, told RFA.

“Right now we aren’t seeing a lot of building demolition or building restructuring yet because the economic downturn has affected everyone regardless of whether they are rich or poor,” she said.

“Who does not owe the bank? The banks seize many of [the properties,] but more important is the affordability of renewing construction. The market economy in Sihanoukville is down now,” said Cheap Sotheary.

Rents for houses are down from thousands of dollars per month to $200 to $300 per month as the economy remains depressed, she said.