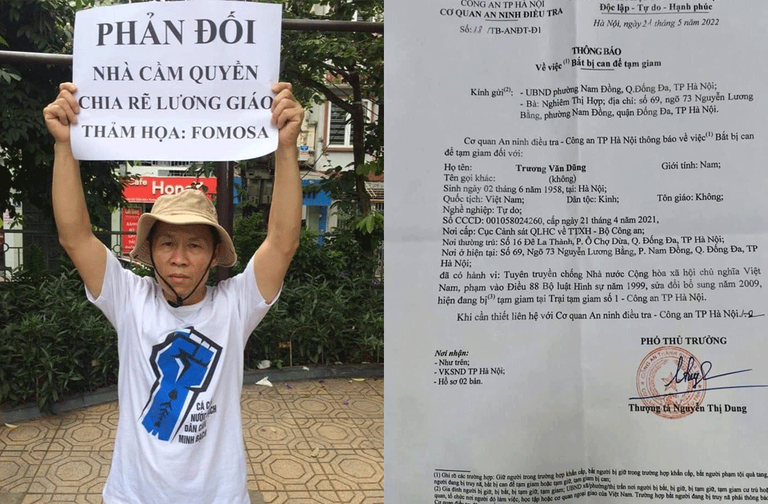 A Vietnamese journalist jailed for writing articles that criticized Vietnam’s one-party communist government is in failing health, with prison authorities refusing family requests to send him outside the facility for medical treatment, RFA has learned.

Nguyen Truong Thuy, a former vice president of the Vietnam Independent Journalists Association (IJAVN), is serving an 11-year sentence at the An Phuoc detention center in southern Vietnam’s Binh Duong province on a charge of “propagandizing against the state.”

He had blogged on civil rights and freedom of speech issues for RFA’s Vietnamese Service for six years and visited the United States in 2014 to testify before the House of Representatives on media freedom in Vietnam.

“I visited him on May 14, and he told me that he now has less back pain but still has to take medicine to treat the problem with his large intestine. And he still has problems with scabies, as the treatment he has been given for this so far has been unsuccessful,” Lan said.

Detention center authorities have rejected requests to send Thuy to a medical center outside the jail for better treatment and have downplayed the severity of his condition, Lan added.

“In a letter he sent home in March, my husband wrote that he sometimes had to urinate in his cell and seek medical help every week because of issues with his health, and because of this, I made a request that he be sent to another facility for treatment,” Lan said.

“But the center said his health was not that bad, and they told me to correct the information in my report.”

A former officer in the Vietnam People’s Army, Thuy worked at a construction company after being discharged and then retired with a pension of more than 6 million VND ($260) per month. But payments were stopped in March after an authorization letter allowing his family to receive his pension on his behalf expired.

Thuy’s harsh treatment behind bars may be due to his refusal to plead guilty to the charges filed against him or to recognize the court’s verdict in his trial, Lan said. She called on the international community to pressure Vietnam’s government to allow him to seek medical care.

Calls by RFA seeking comment from the An Phuoc detention center were unanswered.

“While I was out shopping, I received a phone call from a neighbor telling me he had been arrested, and I came back at 7:30 but they had already taken him away.”

Police in plain clothes then arrived and read out an order to search the house, taking away books, notebooks, laptop computers and protest banners, she added.

Dung had participated in protests in Hanoi including demonstrations against China’s occupation of the Paracel Islands — an island group in the South China Sea also claimed by Vietnam — and protests against the Taiwan-owned Formosa Company for polluting the coastline of four central Vietnamese provinces of Vietnam in 2016.

Public protests even over perceived harm to Vietnam’s interests are considered threats to its political stability and are routinely suppressed by the police.

Dung’s arrest under Article 88 of Vietnam’s Penal Code is the second arrest on national security charges reported since Prime Minister Pham Minh Chinh’s May 12-17 visit to the U.S. Cao Thi Cue, owner of the Peng Lai Temple in southern Vietnam’s Long An province, was arrested on charges of “abusing the rights to freedom and democracy” under Article 331 of the 2015 Penal Code.

Both laws have been criticized by rights groups as tools used to stifle voices of dissent in the one-party communist state.