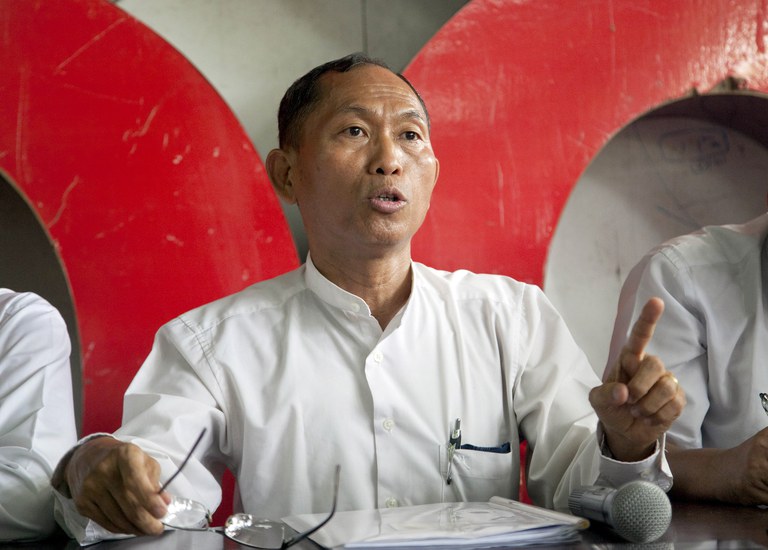 The execution of former student leader Ko Jimmy and three other democracy activists by Myanmar’s junta could become a serious obstacle to resolving the country’s political crisis, analysts and observers said Tuesday.

The official Global New Light of Myanmar on Monday announced the executions of Ko Jimmy, whose real name is Kyaw Min Yu, former National League for Democracy (NLD) lawmaker Phyo Zeya Thaw, and activists Hla Myo Aung and Aung Thura Zaw without reporting the date and method of killings. It is believed the men were hanged on Saturday in Yangon’s Insein Prison.

The act drew widespread condemnation from Western governments, the Association of Southeast Asian Nations (ASEAN), international rights groups and Myanmar-based democracy activists, as well as the Southeast Asian nation’s shadow National Unity Government and the People’s Defense Force (PDF) paramilitaries that are fighting the junta on the NUG’s behalf.

On Tuesday, political analyst Kyaw Saw Han told RFA Burmese that the ASEAN-backed proposal for a dialogue that would include all of Myanmar’s stakeholders is now less likely than ever, as the executions have lessened the opposition’s interest in a peaceful resolution.

“The ASEAN plan, which is being promoted by the international community, to meet with [deposed NLD leader] Daw Aung San Suu Kyi and then meet with the junta and all those involved in the conflict to find a solution, will be delayed,” he predicted.

“I think it will be very difficult to have a dialogue. Right now, the public is angry. Their emotions of anger have been stirred up, so it is harder than before to accept this. We can say it will almost certainly be delayed and that the probability for such a dialogue is very low at this point.”

The junta has reneged on a five-point consensus (5PC) it agreed to with ASEAN in April 2021 to put the country back on the path to democracy. The consensus called for an end to violence; dialogue among all parties; mediation by a special ASEAN envoy; ASEAN-coordinated humanitarian assistance; and a visit to Myanmar by an ASEAN delegation.

Col. Khun Okkar of the Peace Process Steering Team of ethnic armies that have signed a nationwide ceasefire agreement (NCA) with the government since 2015 told RFA that his group will no longer meet with the junta if called for peace talks, as the executions show that the regime is not interested in upholding its promises.

“Those who signed the NCA should not violate the points stated in the pact, namely, to respect human rights and to protect the lives and property of the people,” he said.

“And so, based on that, we will not respond without consulting among ourselves to [the junta’s] calls for further discussions. We have made that decision.”

Khun Okkar added that the actions of the junta could completely derail the peace process because public confidence in the process will be damaged beyond repair.

Only three people have been executed in Myanmar in the past 50 years: student leader Salai Tin Maung Oo, who helped to organize protests over the government’s refusal to grant a state funeral to former U.N. Secretary-General U Thant that resulted in a deadly crackdown in 1974; Capt. Ohn Kyaw Myint, who was found guilty of plotting an assassination of military dictator Gen. Ne Win; and Zimbo, a North Korean agent who bombed the country’s Martyrs’ Mausoleum during an attempted assassination of South Korea’s then-President Chin Doo-hwan in 1983.

While Myanmar’s courts have sentenced people to death, there have been no executions carried out in the 30 years since the country’s 1988 democracy uprising and prior to the military’s Feb. 1, 2021, coup.

Ko Ko Gyi, the chairman of Myanmar’s lesser known opposition People’s Party, said that the junta’s decision to carry out the death penalty after more than 30 years will certainly impact the likelihood of a peaceful resolution to the country’s crisis.

“For those who are trying to find a political solution, it will be very difficult because of this,” he said.

“The public’s emotions are running very high. That’s why I objected and made appeals from the beginning not to [proceed with the death penalty]. Now that it has happened, I see that there will be many difficulties ahead for a political solution.”

He said that public opposition to military rule is likely to become more fierce, which authorities will respond to with greater force, lessening the likelihood of any kind of reconciliation.

“This was a bit too serious. Retaliation is likely,” he said.

Regional PDF groups have vowed to take revenge against junta forces for the weekend’s executions.

Despite the blowback, junta Deputy Information Minister Maj. Gen. Zaw Min Tun told a press conference held in the capital Naypyidaw on Tuesday that the consequences of the executions had “already been considered,” but the decision was taken to “mete out justice for those who died at their hands.”

“The crimes they committed deserved several more death sentences than the ones committed by those on the death row,” he said.

“Therefore, the government unavoidably decided to go ahead with the punishments in accordance with the law, for the sake of innocent people and their relatives. It’d be cruel and show a lack of empathy for us to be lenient to the accused perpetrators and let them go unpunished.”

The four activists had been convicted of crimes that included contacting the Committee Representing Pyidaungsu Hluttaw, PDF and NUG, which in September declared a nationwide state of emergency and called for open rebellion against junta rule, prompting an escalation of attacks on military targets by various allied pro-democracy militias and ethnic armed groups.

Political analyst Sai Kyi Zin Soe said that regardless of what justification the junta might offer, the executions are likely to seriously degrade domestic affairs.

“It has strengthened the minds of those who were calling for blood, especially those who want to settle the blood debt. That’s why we can now say a moderate path for a political solution has been destroyed by this act.”

Late on Monday, the NUG announced that it will “respond effectively to the junta by political, military, and other means” for the executions.

PDF and other armed opposition groups, meanwhile, announced that “there will be no talks” to settle the blood debt and vowed to step up their military operations against junta forces.