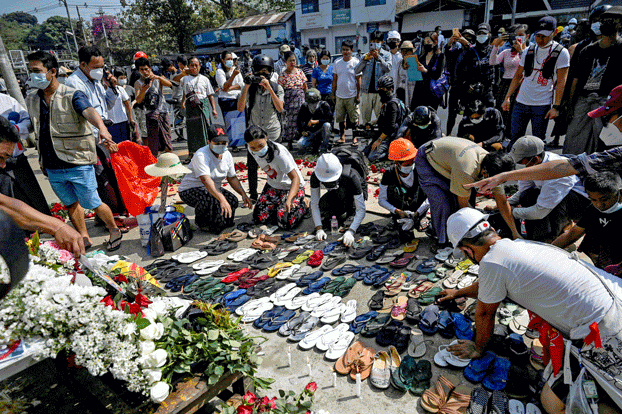 Two dozen teachers have been killed and more than 200 others arrested since Myanmar’s military seized control from the elected government nearly 18 months ago, according to a Thailand-based Burmese human rights organization.

The 24 teachers, who had joined the country’s Civil Disobedience Movement (CDM) of striking professionals, died by gunfire during street protests or from torture, said the Assistance Association for Political Prisoners (AAPP).

The AAPP keeps a daily tally of the number of civilians killed and arrested by the military regime since the Feb. 1, 2021, coup. The 209 teachers who were arrested were also part of the CDM.

The targeted arrest and imprisonment of CDM teachers may be higher than the AAPP’s tally, a spokesman for the organization said. Some teachers also have withdrawn from the CDM and returned to work because of pressure from the junta, he said.

RFA reported in June that at least 40 teachers had been killed as of this May, according to information provided by the junta. RFA attempted to contact military spokesman Maj. Gen. Zaw Min Tun several times by phone without success.

The shadow National Unity Government’s (NUG) Ministry of Education says that more 200,000 of Myanmar’s 450,000 schoolteachers participated in the CDM at its height in the months after the military coup.

A family member of a middle school teacher who was arrested in April 2021 for joining the CDM and sentenced to three years in prison said she is furious with the junta.

“We worked so hard for her to become a schoolteacher,” said the relative, who declined to be named for safety reasons. “It’s not appropriate for a young teacher to spend three years in prison.”

Moe Thway Nyo, a secondary school teacher from Kawa township in Bago region who also joined the CDM but fled to the Myanmar-Thailand border to avoid arrest, said the State Administration Council, as the military regime is known, has begun prosecuting CDM teachers under the country’s Counter-Terrorism Law, which carries stiff penalties.

“The longer the revolution goes on, the more severe the charges they are using to unjustly accuse and arrest CDM teachers,” he said.

At first, the junta prosecuted CDM members under Section 505(a) of Myanmar’s Penal Code, which the regime revised in March 2021. The section previously made it a crime to publish or circulate statements, rumors or reports with intent to cause military personnel to mutiny, disregard or fail in their duty.

The revision made attempts to hinder, disturb or damage the motivation of military personnel and civil servants and cause their hatred, disobedience or disloyalty punishable by up to three years in prison, according to Human Rights Watch.

Now the junta is prosecuting CDM members under Sections 50(a), 50(b), and 50(j) of the Counter-Terrorism Law under which “the prison sentences became harsher,” Moe Thway Nyo said. Convictions under these sections of the law carry a maximum sentence of life imprisonment.

‘On the side of truth’

A CDM secondary school teacher from Taikkyi township in Yangon region said the junta’s targeting of educators participating in the strike is unacceptable.

“Teachers are expressing their views and saying what they think is wrong,” said the educator, who declined to be named for safety reasons. “We are on the side of the truth. The junta’s Education Department already sacked us long ago, but arrests are still being made. We strongly condemn these actions of arbitrary arrests and unjust imprisonments.”

The junta has asked thousands of teachers who joined the CDM to return to classrooms in schools administered by its Education Department. Some have returned to their jobs, mainly out of financial necessity, but many others have stayed the course and are teaching students in NUG-dominated areas outside the regime’s education system.

As of mid-June, more than 3,150 academic staffers had quit the CDM and returned to service, according to junta spokesman Zaw Min Tun.

He also told reporters in May that People’s Defense Force militias that have fought against the military in opposition to the regime were to blame for harassing and killing teachers who resumed working after they quit the CDM.

A spokesman for the Myanmar Teachers’ Federation who did not want to be named for security reasons said that if the regime continues to arrest educators, they will eventually leave the teaching profession.

“If these teachers are arrested and harmed again, they will get tired of the situation and quit,” he said. “They will no longer be able to pass on to the new generation of teachers the knowledge they have acquired, and our education sector will be like a barren plant without any fruit. It is very worrying for the education sector.”

Other educators who are part of the CDM told RFA that in addition to threats of arrest, the junta has prevented them from teaching in private schools.

In a statement issued on July 17, the NUG’s Ministry of Education stated that the arrest of teachers violated articles of the U.N.’s Universal Declaration of Human Rights and Convention on the Rights of the Child, and provisions of Myanmar’s 2019 Child Rights Law.