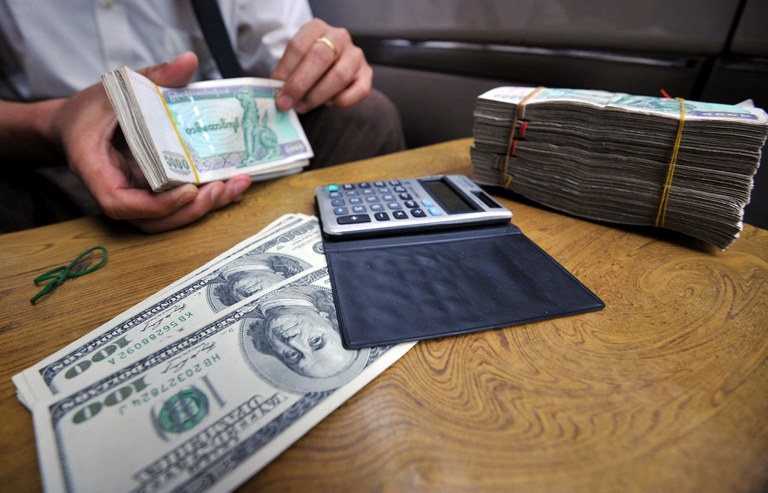 The deputy governor of Myanmar’s central bank was shot by unknown assailants on Thursday, according to sources and media reports, amid a public outcry over a new directive ordering the sale of all U.S. dollars and other foreign currency at a fixed rate to licensed banks.

It was not immediately clear whether Than Than Shwe, who was shot at her apartment complex in the commercial capital Yangon’s Bahan township, survived the attack.

A resident of the same complex told RFA’s Myanmar Service that she and others who live there “only found out what happened when several military trucks arrived.”

“We knew a woman had been shot — a bank employee. But later, news came out that she was the central bank [deputy] governor.”

“We can confirm the attack at 11:30 a.m.,” he said, adding that Than Than Swe “was injured and is being treated at Tatmadaw Hospital.”

“Her condition is good at this moment,” he said at the time.

The Irrawaddy News reported later Thursday that Than Than Swe had died at the hospital from injuries she sustained in the shooting, citing sources close to the deputy governor.

A report by the Associated Press quoted a local official named Thet Oo as saying Than Than Swe had been shot three times by two men after answering the door at her apartment and was confirmed dead after being taken to the hospital.

RFA was unable to independently verify the reports.

Than Than Swe, 55, was sworn in as deputy governor of the central bank after the military seized power from Myanmar’s democratically elected National League for Democracy (NLD) government in a Feb. 1, 2021, coup.

Believed to be the most senior junta official to be shot since the takeover, she is known to have led efforts to reduce the cash flow in the banking and financial system under the NLD, a senior official at the central bank told The Irrawaddy.

A group known as the Yangon Region Military Command (YRMC) announced in a statement on Thursday that it had “successfully carried out” the attack on Than Than Swe as it’s “latest target.” The YRMC is an anti-junta paramilitary group that has pledged loyalty to Myanmar’s shadow National Unity Government (NUG) and claims to have carried out more than 1,100 attacks since the NUG declared war on the military in September.

The NUG, which has distanced itself from attacks on civilians, did not immediately comment on the attack Thursday and RFA was unable to confirm the YRMC’s claim of responsibility.

Junta security forces have killed at least 1,733 civilians and arrested more than 10,000 others since February 2021, mostly during peaceful anti-coup demonstrations, according to the Bangkok-based Assistance Association for Political Prisoners.

The attack on Than Than Swe comes days after an April 3 directive by the central bank ordering all foreign currency, including the U.S. dollar, to be resold within one day of entering the country to licensed banks at a fixed rate of 1,850 kyats to the dollar.

The order also requires government approval before any foreign currency can be sent overseas.

A Myanmar-based economist, who spoke on condition of anonymity, said the central bank order suggests that the junta is running short of dollars. He warned that the move is likely to have dire consequences for an economy already decimated by COVID-19, junta mismanagement and Western sanctions.

“This will make the dollar even scarcer and the buying and selling of dollars will be done under the table,” he said.

“In that case, the kyat will depreciate further. The situation will just get worse. Imported goods will become even more expensive.”

The price of imports from the Thai and Chinese borders are likely to be unaffected, he said, as Thai baht and Chinese yuan can be easily exchanged for Myanmar kyat.

A source who earns his salary in U.S. dollars and declined to be named for security reasons told RFA he can no longer withdraw money from his bank.

“The bank told me they cannot transfer the money to U.S.-dollar accounts due to the CBM directive. They cannot issue any currency notes or transfer money from one account to another in the same bank or to different banks, until further notice. … You can no longer transfer using the mobile app either. You can only see the dollars in your account, but cannot get hold of them,” he said.

“There’s nothing I can do. I’m poor now. There is more money coming in and all of this was converted into kyats automatically. It’s a big, big headache now.”

A businessman named Soe Tun said the prices of cooking and fuel oils are likely to fall if enough U.S. dollars are resold to importers but that the long-term impact on producers of rice and corn could be substantial.

“For these exporters, it is unfortunate that they must sell their [goods] at a rate of 1,850 kyats to the dollar due to the newly fixed exchange rate,” he said. “They will lose roughly 11 percent, or about 200 kyats, for every dollar.”

He said the consequences of the order will only become clear after a month or so.

Khin Maung Myint, a legal expert, told RFA that Myanmar’s law stipulates that the central bank must remain independent from the government, but said the reality of the situation is that everything depends on who is appointed to run the bank by the junta.

“The decision-makers, including the governor and the deputy governor, were appointed by the [junta], so it’s no wonder they act in accordance with the junta’s decisions and directives, no matter how independent they may be under the law,” he said.

“It’s very difficult to say what is legal and what is not these days.”

He warned that continuing down such a path would be unsustainable for Myanmar and said he hopes to see a negotiation or revision of the rules.

Economists speculate that the new order was issued because the central bank has sold off much of the country’s U.S. dollar reserves since February 2021 to keep the kyat afloat. They said the junta may now be seeking to replace the dollar with the Chinese yuan.