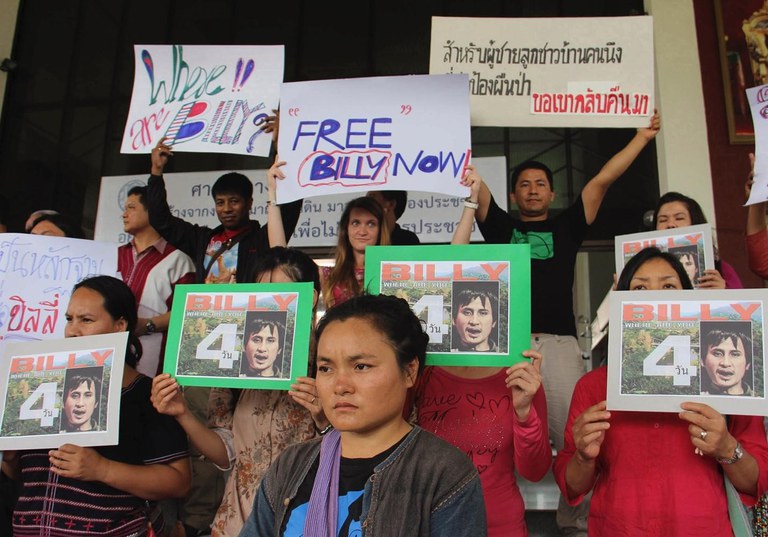 A Thai court formally charged a former senior park ranger and three subordinates suspected of killing an ethnic Karen activist eight years ago before it released them on bail, a move that human rights defenders criticized on Tuesday.

Former chief ranger Chaiwat Limlikhit-akson and his former staffers at Kaeng Krachan National Park pleaded not guilty to five charges on Monday in connection with the 2014 disappearance and death of Porlajee Rakchongcharoen (also known as Billy), a member of the Karen tribal community that is stateless in Thailand.

The Bangkok Central Criminal Court for Corruption and Misconduct Cases then released each of the four on 800,000 baht (U.S. $21,815), according to Prayuth Petchkoon, a spokesman for the prosecution. The justice ministry’s Department of Special Investigation brought the charges against the former officials who had worked at the park in Phetchaburi province near the Thai-Myanmar border.

“For this case, we prepared the indictment as suggested by the DSI,” the spokesman told reporters after the four suspects appeared before the court.

The charges are premeditated murder, unlawful detention, concealment of a corpse, intimidating the victim using weapons and misconduct, Prayuth said.

The court specializes in prosecuting state officials and others implicated in offenses related to bribery, intimidation, coercion and other malfeasance.

Chaiwat, who now works as a senior conservation administrator for the government in Ubon Ratchathani province, denied all allegations. Bunthaen Butsarakham, Thanaset Chaemthet and Kritsanaphong Chitthet are the others who were charged and released.

“I have never arrested any ethnic suspects. I affirm my innocence,” Chaiwat told reporters outside the court. “I have never conducted any acts as accused.

“At first, I felt disheartened, but I knew it was better to get justice [through the court]. … It will be good to get a clear answer for the community.”

It is important to keep a public spotlight on the case so the Thai judicial system has integrity and the DSI and the Attorney General’s Office can bring out the truth in court, a human rights activist said.

“This is the first trial of an enforced disappearance case in Thai history,” Pornpen Khongkachonkiet, director of the Cross-Cultural Foundation, a local human rights organization, told BenarNews, an RFA-affiliated news service, on Tuesday.

Another rights advocate questioned the decision to grant bail.

“Government investigators and civil society groups have repeatedly expressed serious concerns that former park chief Chaiwat Limlikhit-akson and his associates have both the power and influence to intimidate witnesses, so it’s extremely worrisome these four suspects have been released on bail,” said Phil Robertson, deputy Asia director for Human Rights Watch.

Authorities must protect witnesses and monitor Chaiwat and his accomplices, Robertson told BenarNews, adding that Thai officials should recognize “the importance of ensuring a free and fair trial that holds accountable those found responsible, regardless of their position or status.”

In a news release posted on its website last month, the New York-based global watchdog group alleged that the investigation into Billy’s killing had “suffered from a cover-up.”

The four defendants are expected to return to court for arraignment on Sept. 26.

This week’s court action follows the approval by the Thai legislature last month of a bill to criminalize state-sanctioned acts of torture and enforced disappearance. It must be published in the Royal Gazette before taking effect in December.

Billy, who fought for land rights after Chaiwat allegedly sought to move ethnic people from Kaeng Krachan National Park, went missing on April 17, 2014, after park officers stopped him at a checkpoint while he was traveling to meet Karen villagers.

Billy was to testify the next day in a case filed by Karen farmers against Chaiwat, the chief park officer at the time, and others. The locals alleged that the park officials had ransacked and burned their homes and properties in nearby Pongluek-Bangkloy in 2011.

Kaeng Krachan, Thailand’s largest national park, is home to ethnic Bwa G’Naw people, also known as Karen, Kariang or Yang, who are members of a hill tribe scattered across Myanmar, Laos and Thailand.

HRW said Billy was carrying case files and related documents when he was detained, adding those files were never recovered.

Chaiwat was acquitted over insufficient evidence in 2014.

Billy’s family sued Chaiwat for the disappearance, but the case was dismissed after a judge ruled there that there was not enough evidence to prosecute. The park ranger and his aides had told police they released Billy after questioning him for illegally gathering wild honey.

Later, with the help of rights advocates, Billy’s widow lodged a new complaint asking DSI to reopen the case.

Citing a lack of evidence, a Thai public prosecutor in January 2020 announced that the charges against the four, including murder, were dropped.

The case took a new turn when the current leader of the DSI assumed office. The Thai Attorney General’s Office announced last month that it would indict Chaiwat, leading to Monday’s court action.

BenarNews is an RFA-affiliated news service.