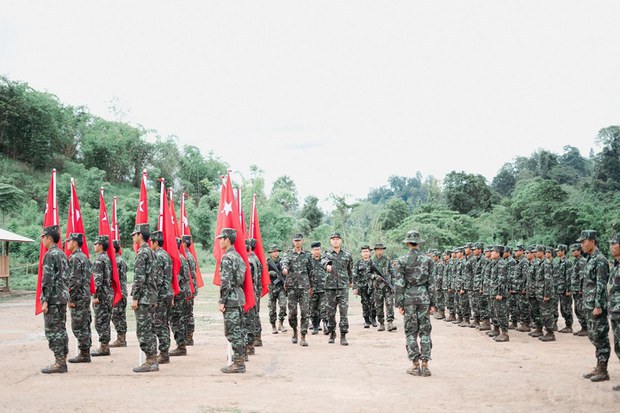 One year after Myanmar’s shadow National Unity Government (NUG) established the prodemocracy People’s Defense Force (PDF), hundreds of anti-junta groups are active throughout the country and violent conflict is escalating with no end in sight, an analyst said Wednesday.

May 6 marked the anniversary of the PDF, a paramilitary group formed to protect Myanmar’s civilians after junta security forces violently repressed peaceful protests of the military’s Feb. 1, 2021, coup. Comprised of members from all walks of life, the PDF counts deposed members of parliament, artists, celebrities, students, farmers, and defected soldiers among its ranks.

In a statement detailing the growth of the group over the past year, the NUG Ministry of Defense said the PDF has since expanded to 257 units based in 250 townships across Myanmar and maintains links to more than 400 local guerrilla groups. Around U.S. $30 million was spent on arms training and military equipment for the PDF since its formation, the NUG said, adding that it plans to increase related expenditures to ensure the group is amply supplied going forward.

But while the PDF has developed into a formidable fighting force, Min Zaw Oo, executive director of the Myanmar Institute for Peace and Security (MIPS), told RFA’s Myanmar Service that the country is less stable than it was in the aftermath of the coup.

“The security situation in the country has deteriorated significantly,” he said.

“There’s a lot of insecurity among the people and armed conflict is on the rise.”

Min Zaw Oo said that the military is increasingly spread thin, fighting insurgents on a multitude of fronts, including in areas technically under its control.

“The junta had to stretch its forces when armed insurgencies erupted in areas where there were none in the past,” he noted.

“These areas are currently controlled by the junta, but there are also rebel forces there. Such rebel pockets exist in nearly every city.”

He warned that, with more armed groups operating in Myanmar than ever before in the country’s 70 years of independence, violent conflict is likely to become worse before it gets better.

In the more than 15 months since the military coup, security forces have killed at least 1,835 civilians and arrested more than 10,600 others, mostly during anti-junta protests, according to Thailand-based NGO Assistance Association for Political Prisoners. The junta has sought to justify its putsch with unsubstantiated claims that the deposed National League for Democracy (NLD) won the country’s most recent election through voter fraud.

In addition to suppressing the opposition in urban areas, the junta has launched offensives against PDF forces located in the Myanmar’s remote border regions, where armed ethnic groups administer wide swathes of territory. ISP-Myanmar and Data for Myanmar – two groups monitoring conflict in the country – say at least 615 civilians have been killed in clashes between the military and the PDF, while as many as 811,000 have been displaced and more than 11,400 homes have been destroyed in fires started during the fighting.

NUG Defense Minister Ye Mon said during his address marking the anniversary of the PDF that the group had grown substantially stronger over the past year and suggested that it would soon remove the junta from power.

“Our comrades have gained a decent amount of experience and military skills within the year, and I believe that they have become more skillful in guerrilla warfare and can attack the enemy more effectively,” he said.

“It has become obvious that the morale of the enemy is down. At such a moment, we need to intensify our attacks and bring the enemy to its knees in front of the people.”

Ye Mon said that with the help of armed ethnic groups, the PDF is now in control of nearly half of Myanmar and predicted further gains soon.

But junta Deputy Information Minister Zaw Min Tun dismissed the claims as inaccurate in a recent interview with RFA.

He also blamed the country’s growing insecurity on the NUG and the PDF, which the junta has labeled “terrorist organizations.”

“We were first on the path to a negotiated solution but they, the current armed insurgents, have chosen to resort to this path of violence,” Zaw Min Tun said.

He said PDF units that pursue armed violence will be “cracked down on until the country is stable.”

Despite calls at home and abroad for inclusive talks to end conflict in Myanmar, the junta has said it will not negotiate with the NUG or the PDF.

Meanwhile, civilians caught in the middle of the fighting say they want to be left out of the conflict.

Nadi Aung, a woman from war-torn Sagaing region’s Myaung township, called on both the military and the PDF to prevent further casualties among unarmed villagers amid the escalating fighting.

“As a citizen, I want to ask both sides to fight bravely and with honor,” she said.