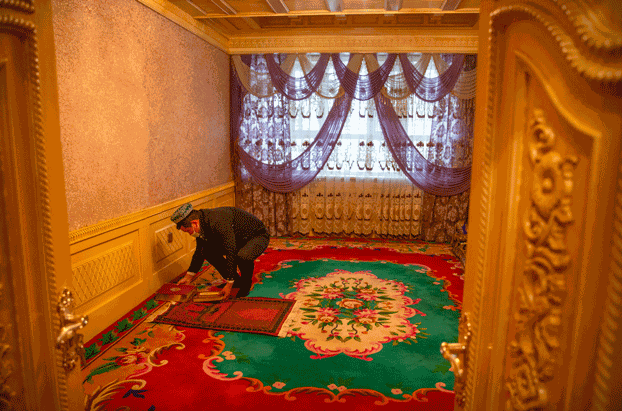 Chinese authorities in Xinjiang are restricting the number of Muslims allowed to observe the Islamic holy month of Ramadan, drawing heavy criticism from rights groups that see the government directive as the latest effort to diminish Uyghur culture in the region.

For years, officials in the Xinjiang Uyghur Autonomous Region (XUAR) have prohibited Uyghurs and other Turkic Muslims from fully observing Ramadan including by banning civil servants, students and teachers from fasting.

Some neighborhood committees in Urumqi (in Chinese, Wulumuqi) and some village officials in Kashgar (Kashi) and Hotan (Hetian) prefectures have received notices that only 10-50 Muslims will be allowed to fast during Ramadan, which runs from April 1 to May 1, and that those who do so must register with authorities, according local administrators and police in Xinjiang.

“Ramadan measures are being taken,” said a village policeman in Kashgar’s Tokkuzak (Toukezhake) township. “The purpose is to allay the fears of [Uyghurs] who are afraid to fast, in addition to security, because there should not be any misconception about the [Chinese Communist] Party’s religious policy. The party never said to abolish religion, but to Sinicize it.”

A village administrator who oversees 10 families in Ghulja (Yining) county in Ili Kazakh (Yili Hasake) Autonomous Prefecture, said registration was already under way in his community and that the elderly and adults with no school-age children are allowed to fast.

“This system is designed to avoid religion to have negative effects on children’s minds,” he said. “There is a lot of propaganda about it right now. A cadre from the village is registering people who meet the criteria for fasting.”

Another administrator who oversees 10 families in the city of Atush (Atushi) in Kizilsu Kirghiz Autonomous Prefecture said he received a notice about the fasting restriction from local authorities.

“Of the 10 families that I am in charge, two — Tahir and Ahmet — were identified as ones that can fast,” he said. “Both are elderly and have no children at home.”

A Uyghur employee at a hotel contacted by RFA on Wednesday said he could not say anything about Ramadan and hung up the phone.

In past years, authorities have warned Uyghur residents that they could be punished for fasting, including by being sent to one of the XUAR’s vast network of internment camps, where authorities are believed to have held up to 1.8 million Uyghurs and other Muslim minorities since April 2017. Authorities also have forced retirees to pledge ahead of Ramadan that they won’t fast or pray to set an example for the wider community and to assume responsibility for ensuring others also refrain.

“It is pathetic and tragic to see China’s notice that only certain people can fast,” said Turghunjan Alawudun, director of the Committee for Religious Affairs at the World Uyghur Congress (WUC) in Germany. “The Muslim world would laugh at China’s actions and be astonished by the setting of a quota for those who can fast.”

The Washington-based Uyghur Human Rights Project issued a statement on Thursday showing solidarity with Uyghurs in Xinjiang who cannot hold iftar, the meal eaten by Muslims at sundown to break the daily fast during Ramadan, or pray “without risking being labeled a religious extremist.”

“There will be no Ramadan for Uyghurs in the homeland this year — or any year — until China’s campaign of genocide is brought to an end,” the statement said.

The Campaign for Uyghurs, also based in Washington, also noted that Uyghurs in Xinjiang are once again being forbidden to worship and celebrate religious holidays.

“To add insult to this injustice, the CCP selectively deploys Islam to paint a sham picture,” the group said in a statement issued Thursday.

WUC president Dolkun Isa said China has turned Ramadan into “a month of hellish suffering of genocide for the Uyghur people” and called on Muslim leaders worldwide to condemn the rights abuses occurring in Xinjiang.

“It’s your religious and moral duty to call on China to stop this ongoing genocide,” he said. “History will not treat you kindly if you continue to allow this genocide to continue under your watch.”

The U.S. and parliaments in some Western countries have declared China’s actions against the Uyghurs and other Turkic people a genocide and crimes against humanity, though China has denied accusations of abuse.