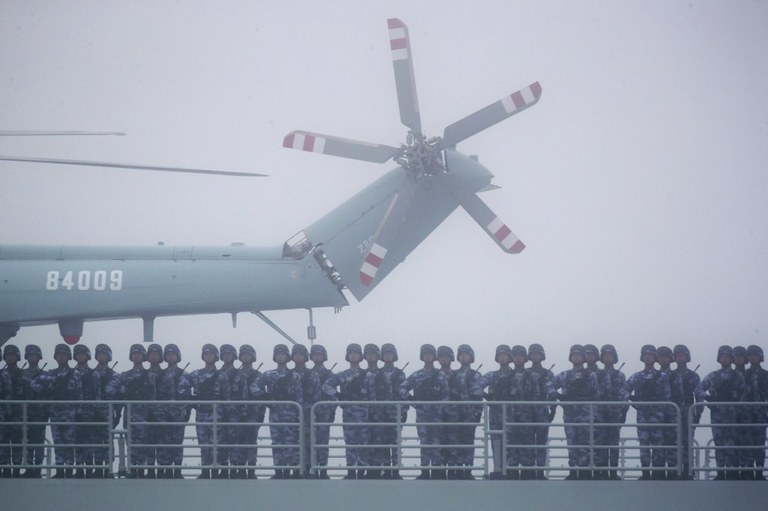 Chinese leader Xi Jinping has signed a directive allowing ‘non-war’ uses of the military, prompting concerns that Beijing may be gearing up to invade the democratic island of Taiwan under the guise of a “special operation” not classified as war.

While Taiwan has never been governed by the Chinese Communist Party (CCP), nor formed part of the People’s Republic of China, and its 23 million people have no wish to give up their sovereignty or democratic way of life, Beijing insists the island is part of its territory.

Xi signed an order which takes effect June 15, state media reported, without printing the the order in full.

“It mainly systematically regulates basic principles, organization and command, types of operations, operational support, and political work, and their implementation by the troops,” state news agency Xinhua said in a in brief report on Monday.

“[It] provides a legal basis for non-war military operation,” it said.

Among the six-chapter document’s stated aims are “maintaining national sovereignty … regional stability and regulating the organization and implementation of non-war military operations,” it said.

The report came after Ukraine president Volodymyr Zelensky called for a diplomatic solution to the threat of military action in the Taiwan Strait.

Speaking via video link at the Shangri-La Dialogue security forum in Singapore, Zelensky used Ukraine as an example, calling on the world to “always support any preventive action,” and called for diplomatic solutions to prevent war.

Beijing-based political commentator Wu Qiang said Zelenskyy appears to be aligning himself with U.S. policy goals in the Asia-Pacific.

“All countries are making these comparisons, but Zelenskyy is making a point of making them,” Wu said. “I believe he is reciprocating [in return for U.S. support]; he is supporting the strategic goals of the United States in the Indo-Pacific region.”

“During the past few months, U.S. President Joe Biden and Secretary of State Antony Blinken have continued to emphasize that the long-term competitor of the U.S. in future will be China,” he said.

He said Zelenskyy’s comments are also representative of a change of attitude in Eastern Europe and the EU to Taiwan, in the wake of the Russian invasion of Ukraine.

“It’s more appropriate for him to represent this change in the EU’s position,” Wu said of Zelenskyy.

“He is smart enough not to want to provoke China, so he can’t speak out very clearly on the Taiwan question, so he had to answer it in a subtle way,” Chen told RFA.

He said there are many areas in which Ukraine relies on Chinese assistance, and will likely rely on it for post-war reconstruction.

“Ukraine’s relationship with Taiwan isn’t that close, so he doesn’t need to sacrifice the relationship between Ukraine and China to support Taiwan, at least not very clearly,” Chen said.

Austin also made it clear that the United States is still committed to maintaining the status quo across the Taiwan Strait, as well as its commitment under the Taiwan Relations Act, which requires Washington to help Taiwan to defend itself.

The war in Ukraine  featured prominently during sessions at the Shangri-La Dialogue.

U.S. Defense Secretary Lloyd Austin told participants that the invasion of Ukraine “indefensible,” and “a preview of a possible world of chaos and turmoil.”

China’s Defense Minister Wei Fenghe delivered scathing remarks about the U.S. Indo-Pacific strategy in a speech in Singapore on Sunday, calling it an attempt to form a clique to contain China.

In his speech on “China’s vision for regional order” at the Shangri-La Dialogue security forum he hit back at Austin’s remarks a day earlier, saying China firmly rejects America’s accusations and threats.

Wei said the Indo-Pacific strategy was “an attempt to build an exclusive small group to hijack countries in our region” to target one specific country – China.

“It is a strategy to create conflict and confrontation to contain and encircle others,” said the minister, who is also a general in China’s People’s Liberation Army (PLA).

Chen said Wei is trying to prevent the U.S. from being too good an ally to Taiwan.

“[Beijing] wants to deter Taiwan from getting too close to the United States, and also hopes that the United States will stop selling arms to Taiwan, especially advanced weaponry,” Chen said.

“That’s why they are using such harsh words.”

“Wei Fenghe is not even a member of the CCP’s Politburo, but plays quite a secondary role,” Wu said, adding that bilateral dialogue between Wei and Austin at the Shangri-La Dialogue could yield little of substance because it wasn’t a meeting of equals or counterparts.