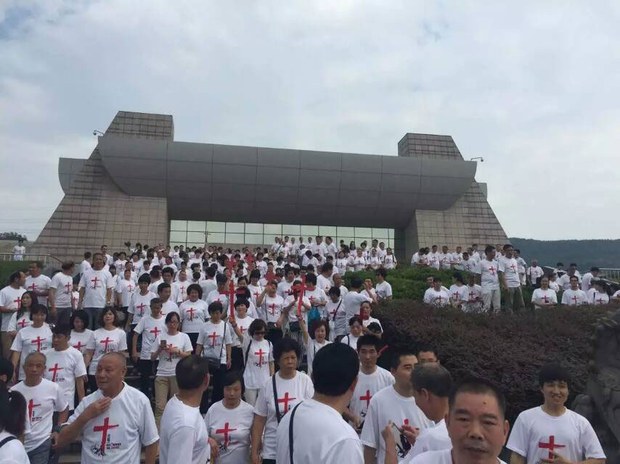 Authorities in eastern China are turning down passport applications from Chinese Christians wanting to emigrate or just study overseas, RFA has learned.

The families of several children raised Christian in the eastern provinces of Zhejiang and Jiangsu said they have recently been questioned about the purpose of their passport applications, which were later turned down after Entry-Exit Bureau officials discovered the family’s religious beliefs.

An overseas education consultant said the cases had emerged in Zhejiang’s Wenzhou city — known for a high proportion of Protestant Christians — as well as other locations in the region.

“A bunch of students from Wenzhou with a church background had been planning to go and study at overseas universities, but the government has refused to give them passports,” a Christian surnamed Zhu from Jiangsu’s Xuzhou city told RFA.

“The government is keeping up the pressure and these controls, even though the pandemic isn’t that serious right now,” he said. “We have come to another crossroads, after 40 years of reform and opening up.”

China announced on May 10 it would place strict curbs on “non-essential” travel overseas by its nationals, amid a surge in immigration inquiries after weeks of grueling mass testing, lockdowns and forcible mass transportation to quarantine camps.

A Christian surnamed Chen from the southern city of Guangzhou said he had also been turned down for a passport, with immigration officials saying there was “no need” to travel during the pandemic.

However, they declined to define what they might regard as a “necessary” overseas trip.

‘Nobody can get or renew a passport’

And a Protestant pastor in the eastern province of Shandong, who gave only the religious name John, said Christians across the country are now being prevented from leaving China.

“It’s not just students with Christian backgrounds but non-religious students as well,” John said. “Nobody can get or renew a passport.”

But he added: “I think it’ll be hard for church leaders like me to go overseas in future.”

“Someone I know was repeatedly questioned … [by border guards], who said that their political views could mean that they are prevented from leaving the country if they’re not careful,” Shi told RFA.

“If they find out that you are considered a sensitive person or have had dealings with the police, they won’t let you leave,” he said. “They will [also] find reasons not to let you out if you have a religious background.”

“In particular, they are highly likely to stop people from traveling overseas to attend a seminary.”

A Zhejiang Christian who declined to be named said the apparent travel bans come amid an ongoing crackdown on Chinese Christians under ruling Chinese Communist Party (CCP) leader Xi Jinping.

“No gatherings are allowed, in the name of disease prevention, and the authorities will shut down any seminaries linked to house churches if they hear about them,” the person said.

“Some richer families like to send their children to high school overseas, but the government has been discouraging that since the pandemic began,” Ma said. “You have to say you’re going for tourism, and not even say you’re going to visit relatives; they question everyone very closely.”

In March, police in the central province of Hunan ordered local residents to hand over their passports to police, promising to return them “when the pandemic is over.”

A March 31 notice from the Baisha police department in the central province of Hunan posted to social media ordered employers to hand over the passports of all employees and family members to police, “to be returned after the pandemic.”

Local police confirmed the report to RFA, and said the measure is being rolled out nationwide.

Meanwhile, people leaving China for foreign study are having their passports clipped as they arrive or try to leave the country, according to passport-holders, overseas study agencies and social media reports.

The number of keyword searches on social media platform WeChat and search engine Baidu for “criteria for emigrating to Canada” has skyrocketed by nearly 3,000 percent in the past month, with most queries clustered in cities and provinces under tough, zero-COVID restrictions, including Shanghai, Jiangsu, Guangdong, and Beijing.

Immigration consultancies have seen a huge spike in emigration inquiries in recent weeks, with clients looking to apply for overseas passports or green cards, while holding onto their Chinese passports, they said in April.