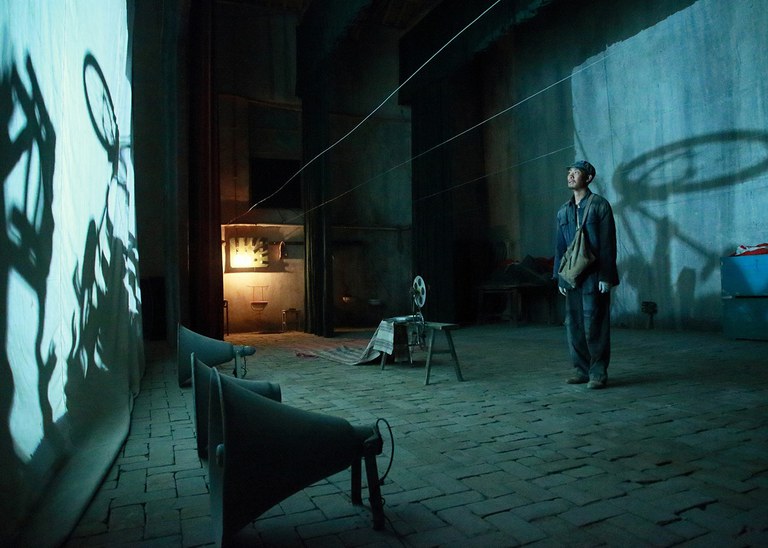 Chinese-American author Geling Yan has hit out at the companies involved in releasing a Zhang Yimou film based on one of her novels outside China without crediting her.

Yan’s name was removed from Zhang’s 2020 film “One Second” despite it being an adaptation of part of one of her novels, after she made an outspoken social media post about a trafficked woman from rural China who was found chained by the neck in an outhouse belonging to her “husband.”

Now, the movie is being shown outside China with the collusion of overseas companies not bound by the Chinese Communist Party (CCP)’s strict censorship policies, a move that incenses Yan, who staged a protest with her husband outside the Berlin movie theater where the film premiered at the weekend.

“If this issue was confined to China, it would be totally understandable,” she said. “But it’s going too far for them to ignore my intellectual property rights and my moral rights across the whole world.”

“And I think that for these companies that are colluding with them to do this, it is a particularly shameful manifestation of their double standards,” Yan said after Sunday’s protest, which was attended by entrepreneurs, musicians, economists, poets, artists, and human rights activists from China.

“Civilization [should be] based on allowing people to think freely and publish the results of their thinking freely,” she said.

Yan said she had condensed 30 years of lived experience and national trauma into her novel “The Criminal Lu Yanshi,” on which “One Second” is based.

“How many works like ‘The Criminal Lu Yanshi’ can a person write across a lifetime? I place huge value on it, then they just strangle and cancel my intellectual property, killing a part of my intellectual life,” Yan said.

Before her comments on social media about the chained woman, Yan’s work was already being banned because of her criticism of the CCP’s response to the pandemic.

Yan said she is highly unlikely to start praising the current regime in China, preferring to focus on the dignity and freedom of the individual.

“I can pay a higher price and fight for the truth, whether it’s about a virus or a woman in chains,” Yan said. “Or that one of my works has been strangled and castrated.”

Yan said she views Zhang Yimou as a victim of the CCP’s censorship system, but she couldn’t accept his taking credit for her work overseas.

“There has been enforced censorship of movies for too long in China,” she said. “Every movie includes a very painful process of trying to pass this test.”

“Every film-maker has had work banned, and Zhang Yimou [said] he wouldn’t do such a thing to an author if there was any other option; he was forced into it,” Yan said.

“But I told him that wasn’t good enough … this helpless attitude of ‘they made me do it’,” she said. “I don’t forgive him for that.”

Yan and her husband and agent Lawrence Walker are now suing Zhang’s Beijing Huanxi Chuan Media Group, as well as the film’s international distributors and U.S., French and German producers.

“We sent a lawyer’s letter but nothing came of it, and the movie was released anyway,” Walker told RFA. “So we started taking to the streets.”

He said China may be a powerful nation, but the CCP shouldn’t be allowed to export their censorship practices, threatening free speech overseas.

“Geling Yan has been my favorite author since high school,” Li said. “I read “Lu Yanshi” while I was in the detention center.”

“Her books are very popular … but now, because she spoke out for women, and for justice, her name is disappearing and her voice has been obliterated [in China],” she said.

The saga began with Chinese director Zhang Yimou and Yan signing an agreement in 2011 giving Zhang the movie rights to her novel “The Criminal Lu Yanshi,” which tells the tale of a man sentenced to labor camp for the political crime of being a “rightist.”

Zhang then made a movie based on the book called “Coming Home.” However, he also completed a second movie based on the novel titled “One Second,” but deleted any reference to Yan or her work of fiction from the publicity materials.

In February 2019, the crew of ‘One Second’ traveled to Berlin for the Berlin International Film Festival. They met at Yan’s house, looking forward to seeing it presented in competition for a Golden Bear award, and entered the venue on the red carpet together with her.

But the movie was withdrawn abruptly just one hour before its scheduled media screening, allegedly for “technical reasons.”

Further delays ensued before the film was eventually released in November 2020 after Zhang made a number of edits and deletions to satisfy Chinese officials.

When the film finally did appear, there was no mention of Yan.

Yan and Walker have contacted the Hollywood Screenwriters’ Guild, of which Yan is a member, French film distribution company Wild Bunch of Paris, online platform Mubi, the Toronto Film Festival and the San Sebastian International Film Festival in Spain.

Mubi has since reinstated a reference to Yan as the author of the novel that inspired “One Second.”

Producer Zhao has told the couple that Yan’s name was removed for political reasons, on orders from the State Administration for Radio, Film and Television (SARFT), and that Huanxi was obliged to implement that order.

Zhao also tried to threaten Yan if she tried to speak out about the movie overseas.

Yan’s outspoken criticism of official cover-ups in the early days of the COVID-19 pandemic in Wuhan has made her persona non grata in Beijing.

Yan once referred to CCP leader Xi Jinping as “also a human trafficker” in connection with the Jiangsu chained woman incident, not realizing that the conversation she was having was being streamed live online.