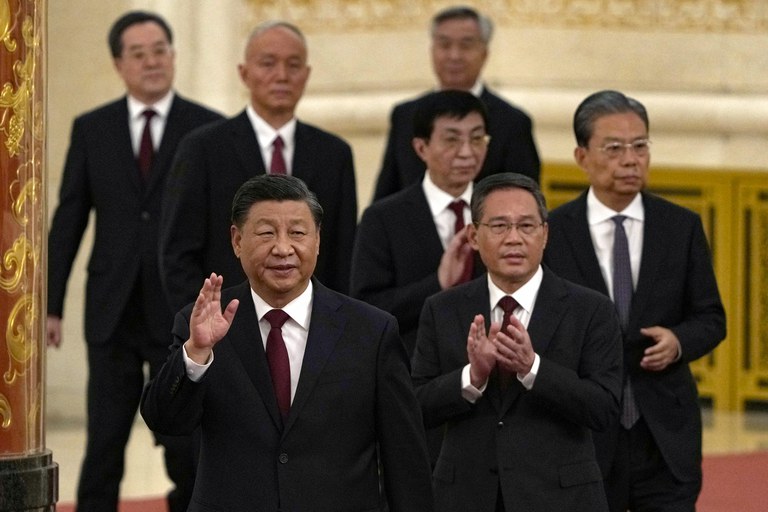 The first plenary session of the party’s 20th Central Committee re-elected Xi to the post of general secretary, breaking with decades of political precedent by granting him a third term after his predecessors were limited to two.
Former Shanghai party chief Li Qiang has succeeded outgoing economic reformer Li Keqiang as Xi’s second-in-command and therefore most likely candidate for premier, while Xi stalwarts Zhao Leji and Wang Huning remain in the seven-member Politburo Standing Committee.
They have been joined by newly promoted former Beijing party chief Cai Qi, former party general office director Ding Xuexiang and former Guangdong party chief Li Xi, all of whom were formerly members of the Politburo.
Xi also revealed an all-male politburo for the first time since 1997, following the retirement of former vice premier Sun Chunlan. No woman has ever sat on the Politburo Standing Committee.

All but Li Xi have previously worked under Xi as he made his way up through party ranks, either in Zhejiang or Shanghai, and were promoted after that point, indicating that it was his favor that propelled their careers.

Former 1989 student protest leader Wang Dan said there is nobody with enough of their own political capital to serve as an obvious successor to Xi.

“It’s obvious looking at the line-up that Xi will also want a fourth term,” Wang told Radio Free Asia. “He has made no arrangement whatsoever for a successor.”

“There won’t even be a fourth term: he’s going to do this until he dies,” he said.

Xi himself was clearly identified as a successor to president Hu Jintao, under whom he served as vice president for five years before taking the reins of the party at the 18th congress in 2012. Xi’s third term as president will likely be confirmed at the National People’s Congress annual session in March 2023.

“It could be said that Xi Jinping has absolute trust in him, and that Li Qiang is absolutely loyal to Xi Jinping,” Chen told RFA. “This absolute loyalty manifests itself in his absolute implementation of Xi’s political line.”

“Li Qiang has been widely criticized internationally for the damage he caused with the Shanghai lockdown, but his unwavering implementation of Xi’s zero-COVID policy reflects his loyalty,” he said.

Protests at home and abroad

Xi’s smooth transition to an unprecedented third term in office has been marked by rare public protest, including against his zero-COVID policy, both at home and overseas.

On the eve of the congress, a lone protester dubbed “Bridge Man” unfurled a banner with anti-Xi slogans on a highway overpass before quickly getting carried off by police. Chinese authorities were quick to shut down social media accounts circulating images of the banner, but photos and videos of the incident got wide attention among Chinese living overseas.

In London, more than 1,000 protesters braved torrential downpours to march to the Chinese Embassy on Sunday, using the slogan “Not my president!” and showing placards with Xi crowned as emperor, to protest the beating of fellow activist Bob Chan by Chinese consular staff in Manchester on Oct. 16.

One protester carried a sign on their back and head that read “To CCP: Don’t pull my hair,” protesting the involvement in the melee of Chinese Consul General Zheng Xiyuan, who said he thought it was his duty to pull Chan’s hair, as he had “insulted my leader” with a cartoon poster of Xi Jinping.
A protester who gave only the surname Auyeung, who was wearing a satirical devil mask of Xi Jinping’s face, said he was there out of anger over the Oct. 16 attack. He said the protests, as well as the summary removal of a reluctant Hu Jintao from the rostrum at the CCP 20th party congress in Beijing on Saturday, had showed the world that Xi still faces “huge opposition.”

Similar protests took place in a number of other British cities on Sunday.

“Digital totalitarianism”
But analysts said the new line-up means Xi is highly likely to continue with the highly authoritarian style of government already developed during his past 10 years at the helm.

“This is digital totalitarianism with Chinese characteristics,” Chen Daoyin said. “He will have far greater enforcement powers than during the Mao era … [and can] achieve a state of total and absolute control and security.”

Feng Chongyi, an associate professor at the University of Technology in Sydney, agreed.

“Cai Qi, Li Qiang, Ding Xuexiang and Wang Huning are all basically his stenographers,” Feng said. “They have no ability or experience when it comes to running the country.”

“Their main selling point is that they execute Xi’s orders at all costs,” Feng said, citing Cai Qi’s mass evictions of migrant worker communities in Beijing, and Li Qiang’s “messing up China’s most economically developed city.”

Feng said the current Politburo standing committee lacks anyone with the technical knowledge to manage the economy.

“This shows that [Xi] no longer cares about such things,” he said.

Feng said Xi is fully expected to break with the past four decades of economic reform and opening up begun by late supreme leader Deng Xiaoping in 1979.

“It was [former premiers] Zhu Rongji and Wen Jiabao who really understood the economy, who steered economic growth, and enabled Xi Jinping to realize his dream of power,” he said. “But now he wants to go back to the ‘common prosperity’ of the Mao era, robbing the rich to help the poor: not creating wealth but destroying it.”

“There is now a much greater risk of economic collapse,” Feng said.

Feng said former President Hu Jintao’s peremptory dismissal from the dais at the 20th party congress on Saturday was likely linked to his finding out that his only ally, Hu Chunhua, wouldn’t be on the Politburo standing committee.

A confused-looking Hu Jintao was physically lifted from his seat by a security guard and firmly escorted from the dais, while attempting to engage Xi in conversation.

“Hu Jintao insisted on attending the closing session of the Party’s 20th National Congress, despite the fact that he has been taking time to recuperate recently,” state news agency Xinhua said in a tweet about the incident.

“When he was not feeling well during the session, his staff, for his health, accompanied him to a room next to the meeting venue for a rest. Now, he is much better,” it said.

Wang Dan said the “total withdrawal of economic technocrats” from the new leadership team was striking.

“This means that the Cultural Revolution is coming,” Wang said in a reference to more than a decade of political turmoil under Mao Zedong from the late 1960s until the fall of the Gang of Four in 1976.

“Economic development will no longer be the main focus,” he said. “There isn’t a single member of the Politburo standing committee who has held a long-term economic portfolio.”

“Instead, struggle will be the focus, because these are all party-builders,” Wang said. “Li Qiang’s appointment sends a very strong message … that [Xi] doesn’t care about someone’s record, only about their loyalty.”

“Even Mao Zedong [only] had a portion of his officials who were truly loyal to him; Xi’s are his minions,” he said.

Independent scholar Wen Zhigang said “political struggle” will now replace economic prosperity as the main party line, as the concept has been written into the newly amended CCP charter.

“[The CCP] has replaced the philosophy of economic construction of the past four decades with the philosophy of [political] struggle,” Wen told RFA. “This will be the new party line and the new program, which is why Li Keqiang and all the other heirs to Deng Xiaoping’s economic development line have all been purged.”

Wen said political purges will likely intensify within party ranks, along with growing attacks on the private sector. China’s foreign policy will become less easy to predict, and involve a standoff with U.S. power and influence in the Taiwan Strait and Western Pacific region.

“Taiwan can’t avoid war”
Xi’s new term in office begins amid growing concern that he will make good on his threat to annex the democratic island of Taiwan by military force, and sooner rather than later.

“From the perspective of Xi’s new team, resolving the Taiwan issue will be the central task, and the most important task of the next 5-10 years,” Wang said.

“Taiwan can’t avoid war … the most important thing is to prepare for it.”

Taiwan has never been ruled by the Communist Party, nor formed part of the People’s Republic of China, and its 23 million people have no wish to give up their sovereignty or their democratic way of life, according to recent opinion polls.

British writer Hao Wang said Xi is unlikely to want to talk to the Taiwanese government, as Beijing has ruled out negotiating with Taipei on an equal footing.

“Xi Jinping doesn’t want to talk to Taiwan; he just wants minions who will enforce his will and his fifth column [of Party  infiltrators] there to comply with his directives.” Wang told RFA. “It’s about the one-way execution of the emperor’s will.”

Wang said Taiwan doesn’t seem worried enough despite global perceptions that the country is in danger.

“It’s time to stop imagining and move to immediate action,” he said.

The Communist Party also renewed Xi’s post as chairman of the Central Military Commission and listed his new vice chairmen as Zhang Youxia and He Weidong, a veteran of the People’s Liberation Army’s 31st Army in the southeastern province of Fujian, across the Taiwan Strait from Taiwan.

“He Weidong and Zhang Youxia … are both from the army, so no balance has been struck between the different branches of the military,” Wang said. “These are purely political [appointments].”

“He Weidong is a military commander who has been in charge of the Fujian frontline for a long time and has carried out operations against Taiwan,” he said. “Zhang Youxia … someone with combat experience in Vietnam, has been brought in alongside him, which would greatly enhance any military deployment or use of force against Taiwan.”

– Translated and edited by Luisetta Mudie