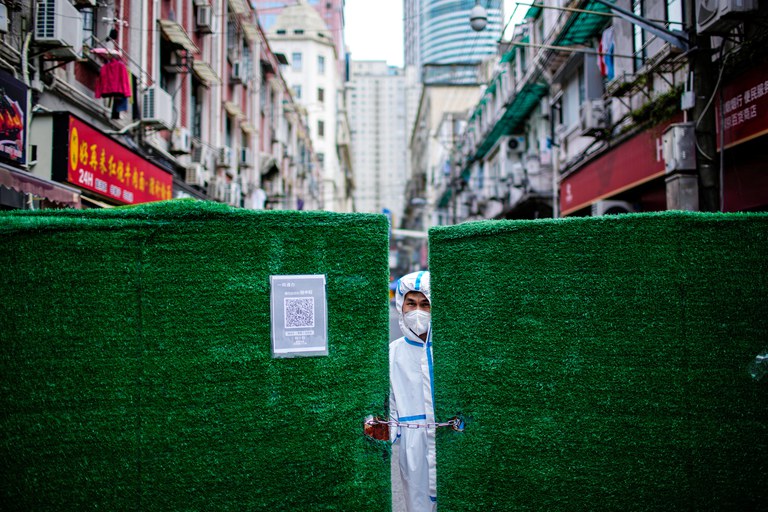 Police officers, neighborhood committee members and community volunteers dressed in head-to-toe white PPE have been a ubiquitous feature of China’s zero-COVID policy, often shown on social media video uploads surrounding people, beating and dragging them away, or knocking on their door to put pressure on them to submit to a PCR test, to leave home for an isolation camp.

Dubbed White Guards in a nod to the Red Guards, the often violent and arbitrary enforcers of political decrees during the Cultural Revolution (1966-1976), the “dabai,” or “big whites” have gained themselves a reputation for Kafkaesque orders, physical violence and abuse of power.

Yet many didn’t sign up for grueling disease control prevention measures that left some of them isolated from friends and family and others loathed by the residents they had thought they were mostly there to help.

Constant political sloganeering, changing criteria and orders from higher up, and incomprehensible containment processes left many neighborhood committee members and healthcare workers emotionally drained, under constant psychological stress and liable either to lash out physically or verbally.

Others grabbed any opportunity to improve their lives with both hands, as in the case of the Shanghai neighborhood committee who barricaded themselves into a room to gorge themselves on a secret stash of cake while their residents were having trouble getting any food at all.

A community doctor surnamed Chen was among the army of White Guards drafted in to carry out mass, compulsory PCR testing throughout the Shanghai lockdown, getting up in the middle of the night to start swabbing thousands of mouths and nostrils a day.

“We were originally doctors in regular private clinics,” Chen told RFA. “When lockdown started a while back, all non-essential facilities were shut down, and staff called in to assist with disease control and prevention work.”

“We didn’t volunteer for this work, and we received no compensation for it,” he said.

Chen was pressured into joining the “dabai” by his manager, who said PCR testing was now a political task, under ruling Chinese Communist Party (CCP) leader Xi Jinping’s ongoing insistence on a zero-COVID strategy to deal with the omicron variant of COVID-19.

“If we hadn’t gone, the powers-that-be would have given our clinic trouble in future, making it hard to stay in business,” Chen said.

In return for wearing full body PPE for five hours straight, making bathroom breaks well nigh impossible, Chen, who lives in Handan city in the northern province of Hebei, said the “dabai” could expect three meals a day and drinks provided by the authorities, at a time when many families are struggling to buy enough food because of lockdown restrictions on businesses and delivery drivers.

Many would save their meals and bring them home to their families after work, Chen said, adding that this was a key motivation for him to keep doing the work.

Chen said there was scant scientific basis for the seemingly endless rounds of mass PCR testing he helped to implement.

“This isn’t really disease control and prevention at all,” Chen said. “The most important thing in disease control work is to prevent clusters, but many communities had zero infections.”

“The whole thing was more of a political show, using Handan as a line of defense to protect Beijing,” he said.

“Everyone is in danger right now, and a lot of people are afraid to talk about the trauma the pandemic has caused them, but … it won’t stay hidden,” Chen said.

He said he has seen a number of patients with depression, as well as patients presenting with mysterious abdominal pain with unknown cause, which he attributed to the effects of trauma on the body.

A temporary worker surnamed Wang who was drafted onto a community disinfection team in Shanghai’s Pudong district said he did it out of desperation, after his source of work was cut off by the pandemic.

“I still have to pay the mortgage, so there was a lot of pressure,” Wang said. “I was actually scared at first and thought it was a bit dangerous, because I came into contact with so many people,” said Wang, who normally makes a living cutting people’s hair,

Huang Kuang-kuo, professor of psychology at National Taiwan University, said the psychological concept of depersonalization could go some way to explaining the behavior of people, particularly the faceless “dabai,” during the Shanghai lockdown.

“This makes sense, because when we can’t identify people, then they behave differently,” Huang told RFA. “A more authoritarian personality comes to the fore.”