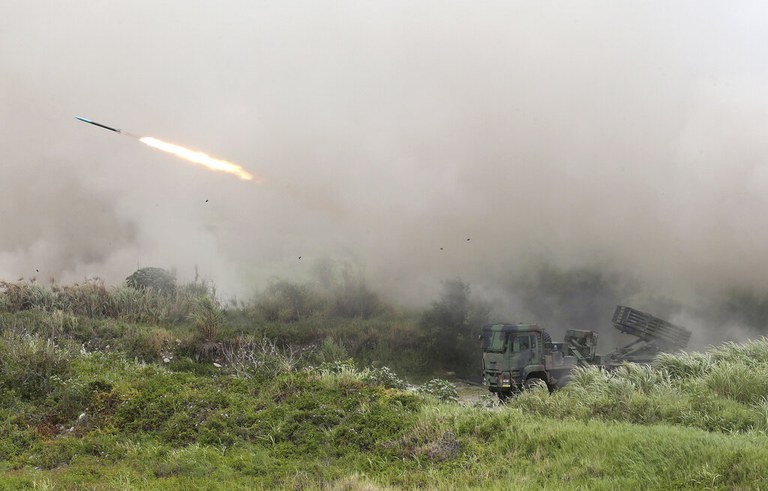 The Chinese military conducted live-fire drills around Taiwan over the weekend, its official website said Monday, while Japan reported scrambling fighter jets because of a suspected intrusion of its airspace over the East China Sea.

In a short dispatch on Monday, the military’s website said “naval, air and conventional missile forces of the Chinese PLA Eastern Theater Command held drills in seas and airspace to the east and southwest of Taiwan Island from May 6 to 8, in a bid to test and improve the joint operations capability of multiple services and arms.” PLA stands for People’s Liberation Army.

The Japanese Ministry of Defense’s (JMOD’s) Joint Staff also confirmed via its social media that from May 6 to 8, Japanese air force’s fighters “scrambled to cope with a suspected intrusion into Japan’s airspace over the East China Sea and the Pacific Ocean.”

Before that on Sunday, the JMOD issued a press release saying that the Chinese aircraft carrier Liaoning and four other warships were spotted on May 7 in the waters about 150 kilometers (95 miles) south of Ishigaki Island, Okinawa Prefecture.

On May 6, the number of ships in the flotilla was six, the ministry said.

The Chinese vessels were conducting live-fire drills with carrier-based fighters and helicopters, the JMOD said, adding that Japan’s Izumo light aircraft carrier was dispatched to monitor the situation.

RFA has approached the Taiwanese Ministry of National Defense (MOND) for comment on the latest Chinese drills.

Taiwan’s local media reported that he ministry has deployed Sky Bow III missiles, which have a maximum range of 200 kilometers (125 miles), to deal with threats to eastern Taiwan. F-16V fighter jets will be deployed at Taitung’s Chihang Base and a number of Hsiung Feng III and Harpoon missiles will also be moved to the east.

Taiwanese people consider themselves citizens of a sovereign country but China claims the self-ruling, democratic island is a breakaway province of China and vows to unite it with the mainland, by force if necessary.

Experts said that the appearance of the Chinese aircraft carrier Liaoning and aircraft near eastern Taiwan was a direct challenge to the island. Qi Leyi, a Taipei-based military analyst and commentator for RFA Mandarin, said that the PLA joint combat drills will escalate further in the future.

“The sea and the airspace east and southwest of Taiwan will remain the focus of future operations against Taiwan,” Qi said.

“Besides naval and air forces, the conventional missile force will be utilized, too, to attack Taiwan’s important political and military targets,” he said.

The Taiwanese MOND said on May 6, 18 Chinese military planes entered the southwestern and southeastern parts of Taiwan’s air defense identification zone, the largest intrusion by Chinese military aircraft so far in May.

A week ago on May 2, the Japanese and Taiwanese militaries were put on alert after spotting a flotilla led by the Liaoning aircraft carrier sailing from the East China Sea towards the Pacific Ocean.

On that day, the aircraft carrier was accompanied by seven destroyers and supply vessels, forming the largest Liaoning carrier group in recent voyages, according to the Chinese mouthpiece Global Times.

The Liaoning – China’s first aircraft carrier – was seen carrying a number of J-15 fighter jets as well as Z-8 and Z-9 helicopters.

The carrier group is on a “routine, realistic combat training mission,” said the hawkish newspaper.

Last December, the aircraft carrier and five other vessels conducted drills in the Yellow Sea, the East China Sea and the West Pacific for 21 days in order to boost its combat capability.

The Global Times quoted Shi Hong, the editor of a Chinese military magazine, as saying that the waters where the Liaoning carrier group is holding drills is “a vital sea region should a reunification-by-force operation take place.”

“By moving in tandem with aerial and maritime forces from the Chinese mainland, the carrier group could completely cut off the routes foreign forces may take if they militarily interfere with the Taiwan question,” Shi was quoted as saying.

Taiwanese military analyst Shen Ming-Shih however pointed out that the fact that China uses the Liaoning aircraft carrier as the flagship to command and the other active carrier Shandong is in port for maintenance, shows that “the PLA still has the problem of dual aircraft carrier maritime confrontation, and its navigation scope is also limited.”

“It can try bullying Taiwan, but in the face of the U.S. naval and air superiority, China still has great concerns,” he said.