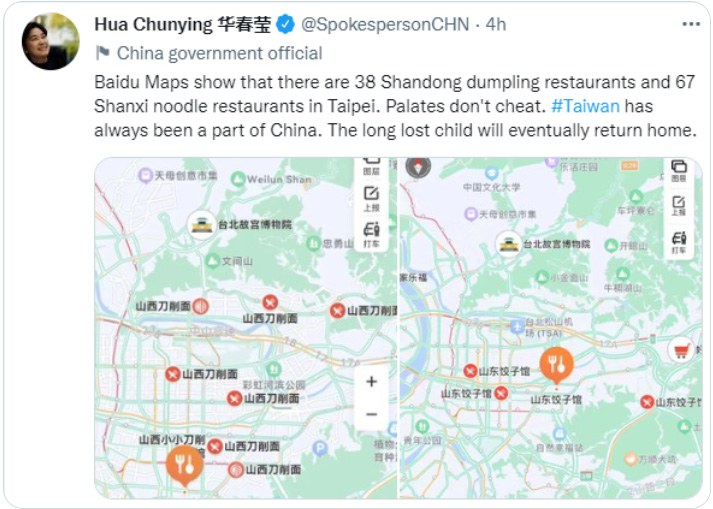 Cyber attacks and a Chinese disinformation campaign targeting the democratic island of Taiwan throw the spotlight on Beijing’s use of hybrid warfare in the wake of Pelosi’s visit, a Taiwanese military official said on Monday.

Maj. Gen. Chen Yu-lin, deputy director of the Political and War Bureau of Taiwan’s Ministry of National Defense told journalists on Monday that the current wave of “cognitive operations” started before the military exercises were announced.

Chen said the hybrid warfare campaign sought to create an atmosphere suggesting China might be invading Taiwan, to attack the public image of the government, and to disrupt civilian and military morale.

“The CCP’s military exercises began on Aug. 4, when the number of cognitive warfare-related posts targeting Taiwan skyrocketed to 73, peaking at 87 on Aug. 5,” Chen. “[But] official media posted a total of 87 messages on Aug. 2, before the military exercises started.”

“We immediately issued a press release to … inform the public that these messages weren’t true,” Chen said, citing one message claiming the PLA had shot down a Taiwanese fighter jet accompanying Pelosi’s plane.

“We immediately clarified that this was fake news,” Chen said.

Hybrid warfare denotes a combination of conventional military action on the ground and hacks or disinformation campaigns designed to attack public morale and sow confusion.

Chen Hui-min, editor-in-chief of the Taiwan FactCheck Center, said his organization had detected a 30-40 increase in fake reports online since Pelosi’s visit.

“The biggest difference [from the past] is that it seems to be spreading from English-language Twitter,” Chen told RFA. “There is also a lot of fake information on China’s [social media platform] Weibo, some of which has made its way onto social media platforms used in Taiwan, including LINE and Facebook.”

“It used to be pretty rare to see such posts in the English Twittersphere,” Chen said. “Accounts that once focused on the war in Ukraine suddenly started spreading fake news about Pelosi’s visit to Taiwan.”

National Taiwan University was hacked, with the words “there is only one China in this world” appearing on its official website.

Meanwhile, the National Palace Museum issued a statement denying online rumors that the government was preparing to send tens of thousands of rare artifacts overseas for safekeeping.

According to Chen Hui-min, some of the images used by the disinformation posts used military images from two years earlier to suggest the PLA had fired rockets across the island.

“It’s incorrect to say that the CCP’s long-range rockets have flown across Taiwan. Even the People’s Liberation Army (PLA) and official Chinese media have reported that they landed in the Taiwan Strait, stopping short of crossing Taiwan,” Chen said.

“Another annotated photo said the Chinese army was assembling on the coast, using edited photos of North Korean military exercises that took place in 2017.”

As Pelosi visited Taiwan and met with president Tsai Ing-wen on Aug. 3, messages started popping up on digital signage in 7-Eleven convenience stores across the country that read: “Warmonger Pelosi, get out of Taiwan!”

Digital signage at a railway station in the southern port city of Kaohsiung and at a government office in Nantou county also displayed a message calling Pelosi “an old witch.”

Investigators said the attacks originated from an unknown IP address, the island’s Central News Agency (CNA) reported at the time.

The hacks came after the official website of Tsai’s Presidential Office was taken down for around 20 minutes by a cyberattack, after which full service was restored, CNA reported.

Mainland Chinese website Baidu joined in the cognitive warfare, releasing maps of Taiwan for the first time, which went viral after social media users noticed that many streets in Taiwan’s cities are named for cities in mainland China.

Chinese officials and pro-CCP commentators have launched a global media offensive around Pelosi’s Taiwan visit, claiming that the island, which has never been ruled by the CCP nor formed part of the 72-year-old People’s Republic of China, is an “inseparable” part of Chinese territory.

CCP leader Xi Jinping has repeatedly said that Taiwan must be “unified” with China, and refused to rule out the use of military force to annex the island.

But Taiwan president Tsai Ing-wen, who was re-elected in a 2020 landslide after vowing to stand up to China on the issue, has said that Taiwan’s 23 million population have no wish to give up their sovereignty, a view that is borne out by repeated opinion polls.

Chinese foreign ministry spokeswoman Hua Chunying tweeted on Sunday that the maps showed Shandong dumpling restaurants and Shanxi noodle restaurants in Taipei, saying the presence of the restaurants means that Taiwan has always been a part of China.

Twitter users responded with parodies of the tweet, citing the ubiquitous presence of American fast-food chains KFC and McDonalds in China, and claiming China as “part of Kentucky.”

Taiwan cookery expert Clarissa Wei said many of the restaurants had already altered their dishes to suit the local palate, however, drawing parallels with the evolution of Chinese dishes in the United States to suit local tastes.

Feminist writer Shangguan Luan said China’s CCP-supporting Little Pinks could be forgiven for their ignorance, given that they have been absorbing CCP propaganda all of their lives.

“But Hua Chunying, as spokesperson for the ministry of foreign affairs, is at the heart of China’s external image and the core of mainstream public opinion,” she said. “It’s shocking to see her to go along with such a nonsensical statement.”

The wave of hacker attacks has also included attacks on TaiPower, the island’s main energy company, in recent days, according to a report Taiwan’s ETtoday cloud news service.

Shangguan Luan said there was usually scant content to be had in Chinese disinformation.

“There’s no real content to these posts, just clickbait and emotional outbursts,” she said. “No core systems were hacked, just some billboards … this was a low-level and childish move; a form of bullying … that had very little impact on the lives of Taiwan’s people.”

Tseng Yishuo, an assistant researcher at the Institute of Cyber Security and Decision-making at the National Defense Security Research Institute said Taiwan has been bombarded with Chinese disinformation in recent years, with most of it underlining Beijing’s territorial claim on the island.