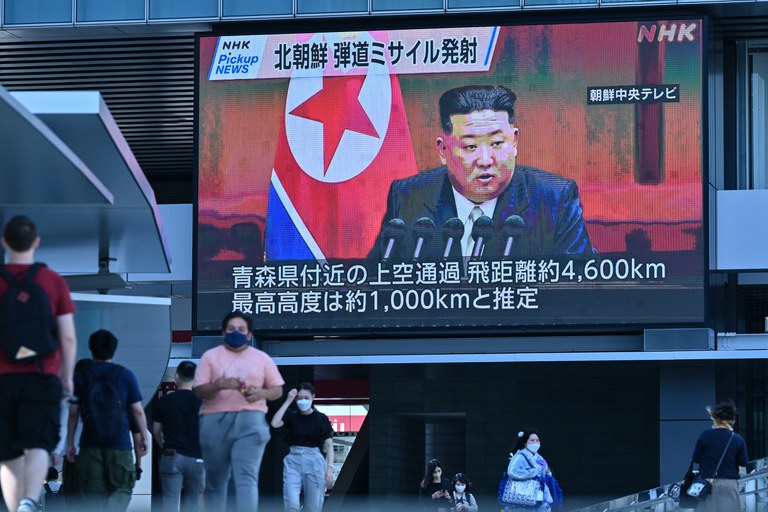 A U.S.-led push to condemn North Korea’s launch of a missile across Japan was blocked by China and Russia in the U.N. Security Council on Wednesday, with the veto powers saying Pyongyang was provoked by recent U.S. military drills.

The meeting of the 15-member council was called by the United States after North Korea fired a missile across Japanese territory into the Pacific Ocean on Tuesday, violating council resolutions banning Pyongyang from such tests.

The test missile launch was condemned by the 12 other members of the U.N. Security Council – Albania, France, Ireland, Norway, the United Kingdom, India, the United Arab Emirates, Ghana, Mexico, Kenya, Brazil and Gabon. Each called for a return to “dialogue” between countries in the region.

But Russia and China – who had opposed a public council meeting and in May vetoed a resolution to impose new sanctions against North Korea for its new program of test launches – both said the United States was also at fault.

Russia’s deputy representative to the United Nations, Anna Evstigneeva, defended the test launches, and blamed the context of what she termed America’s “unilateral security doctrine in the Asia-Pacific region.”

She noted that the United States, Japan and South Korea last month carried out military exercises in the Sea of Japan using a nuclear aircraft carrier that she said focused training on hitting key targets in North Korea.

“It is obvious that the missile launches by Pyongyang are a consequence of a short-sighted confrontational military activity surrounding this country conducted by the United States, which hurts their own partners in the region and also hurts the situation in Northeast Asia as a whole,” Evstigneeva said.

“We have also noticed the multiple joint military exercises held by the U.S. and other countries recently in the region,” Geng told the Security Council. “A brief examination will reveal that [North Korea’s] launch activities took place either before or after such military activities and did not exist in isolation.”

However, U.S. ambassador to the United Nations, Linda Thomas-Greenfield, speaking for a second time after first making a case to condemn North Korea’s actions, said the explanation from China and Russia made little sense.

“As we expected, instead of putting the blame where the blame lies,” Thomas-Greenfield said, “Russia and China want to blame others for their actions.”

She said that U.S.-led drills with South Korea and Japan were carried out “responsibly and consistent with international law” and that there was “no equivalency” with the “unlawful, reckless” missile launches by North Korea.

Japan’s permanent representative to the United Nations, Ishikane Kimihiro, who is not currently sitting on the council but was invited to address it, called on the council to enforce “unanimously adopted” resolutions banning such tests.

The North Korean missile test was the first to pass through Japanese territory in five years, and flew 2,800 miles at 17 times the speed of sound. The United States and South Korea conducted their own missile tests in response earlier on Wednesday, with a malfunctioning South Korean missile crashing into an air force base on the outskirts of the coastal city of Gangneung.