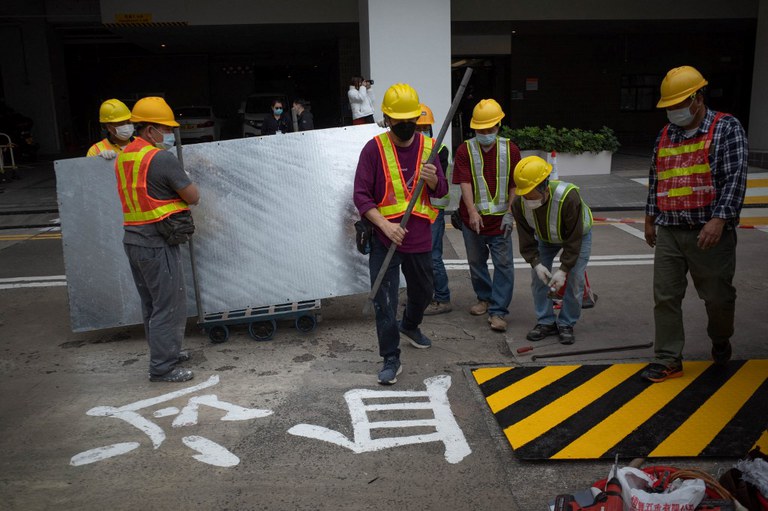 Authorities in China have ordered dozens of pro-democracy activists and dissidents into house arrest or other forms of restriction ahead of the 33rd anniversary of the Tiananmen massacre on June 4.

Dissident political commentator Zha Jianguo and veteran journalist Gao Yu are under house arrest at their Beijing homes, while rights lawyer Pu Zhiqiang and his wife have been taken on a forced “vacation” out of town.

Security is tighter than usual for this year’s anniversary of the bloody crackdown that ended weeks of student-led peaceful protests on Tiananmen Square, as the authorities tighten their grip ahead of the 20th congress of the ruling Chinese Communist Party (CCP) later this year.

“The police have set guard detail and a car [outside my home] to watch me,” Gao told RFA on Friday. “If I want to go anywhere, they have to take me in their car.”

“Also, my landline and mobile phone are no longer acceptable international calls, including calls from Hong Kong,” she said.

Dissident commentator Zha Jianguo, who was among the founding members of the long-banned China Democracy Party (CDP), said he is in a similar situation.

“I went out on the morning of June 1 and saw them setting out stools and sitting themselves down outside our home,” he said. “The district police department said they would be sending some people round today as well.”

“As far as I know, about seven, eight, maybe 10 people are under house arrest like this in Beijing,” he said.

Zha said police have also warned him not to speak about the anniversary in media interviews.

“They called me yesterday and said I wasn’t to discuss June 4 with anyone, not in posts, nor in media interviews,” he said. “I told them, it’s been 33 years since June 4, and you’re still doing this?”

Sources said fellow Beijing-based dissidents Hu Shigen, He Depu, massacre survivor Qi Zhiyong and others were also under some form of restriction.

You Weijie, spokesperson for the Tiananmen Mothers victims group that campaigns for compensation, redress and transparency of information around the massacre, said she couldn’t talk when contacted by RFA on Friday.

“It’s not convenient for me to talk to you right now,” You said, her response suggesting that the authorities were monitoring her communications.

Asked if she had been banned from giving media interviews, You replied: “Yes, yes.”

She said she and the other Tiananmen Mothers members were being escorted to Wan’an Cemetery on Saturday to make offerings for those who died in the crackdown.

“I’ll go tomorrow; the car has been arranged. It’ll be the same families going,” she said.

Zhou Xiang, a dissident scholar in the central province of Hunan, said security was particularly tight this year.

“Several people in Zhuzhou city have been contacted [by police]. He Jiawei was the first, and they have taken away his mobile phone,” Zhou said. “I also got a call. They told me not to speak out, not to upload photos or text [relating to June 4, 1989], etc.”

“As far as I know, maybe seven or eight people received these warnings in Zhuzhou city.”

Dissidents in the southwestern megacity of Chongqing reported similar treatment.

Democracy advocate Xu Wanping, who served 23 years in jail for trying to set up an opposition party, said he is being taken out of town by police.

“They made a point of contacting me and emphasizing that I wasn’t to speak out on anything today or tomorrow,” he said.

“They’re taking me out of town for a couple of days; I’ve just gotten ready to leave.”

Asked if police were present as he spoke, Xu laughed and replied: “I wish you a healthy Dragon Boat Festival.”

He said many others in Chongqing were also being escorted away from their homes.

According to Zhou, the moves are part of a nationwide coordinated effort by police to prevent any form of public commemoration of the June 4, 1989 bloodshed, whether through in-person meetings or online.

He said the level of security was “unprecedented” for a June 4 anniversary, and was likely linked to political jitters ahead of the 20th Party Congress later this year.

Meanwhile, authorities in Hong Kong, where a once-annual candlelight vigil for massacre victims is being banned for the third year running, announced the partial closure of Victoria Park, the venue where it once took place.

“In view of the police’s observation that some people are using different channels to incite the participation of unauthorized assemblies in the Victoria Park and its vicinity which may involve the use of the venue for illegal activities, the Leisure and Cultural Services Department (LCSD) [is closing] part of the Victoria Park … until 12.30 a.m. on June 5, in order to prevent any unauthorized assemblies in the Park,” an LCSD spokesperson said in a statement on Thursday.

The closed area will include the soccer pitches where the vigils once took place, it said.

Police senior superintendent Liauw Ka-kei warned the public not to “test” the force’s willingness to enforce the law on June 4.

He warned that solo candlelight vigils will be treated in the same way as gatherings, and that anyone wearing black clothing or carrying candles would be regarded as suspect.

He cited recent court precedents as establishing that people could be guilty of “illegal assembly” even if they weren’t present at the scene, if it could be shown that they had in some way promoted such assemblies.

“If the purpose of the person’s appearance at the scene makes it seem that he is inciting others to participate in an illegal assembly, the police will definitely search for evidence, and the specific law enforcement action will be determined depending on the situation,” Liauw warned.

He said the police hadn’t received any application for a public gathering on June 4 this year.

Former League of Social Democrats chairman Avery Ng said the police claim that they could tell the intentions of anyone turning up at Victoria Park on Saturday was questionable.

“This is very strange behavior on the part of the Hong Kong police,” Ng told RFA. “They seem to know what everyone is thinking and what they are planning.”

“If you join a crowd in Causeway Bay taking a lot of photos when a celebrity is visiting, that’s OK, but if you are alone or in pairs, in black clothing, then you could be thinking about the students who died on June 4, 1989, so that’s not OK,” he said.

“By making statements like these, the police are absolutely trying to create an atmosphere of fear around the words June 4, which are very sensitive and must not be uttered,” Ng said. “This city is now ruled by man, and we can’t tell what’s legal and what’s not.”

“You won’t get a definite answer out of the police or the government,” he said.